The Downes Side - UFC 203 Predictions

That’s right boys and girls, it’s time for another Ohioan version of the Downes Side! This weekend the UFC comes to the Quicken Loans Arena in Cleveland to give the fans some joy before an obviously disappointing season from the Browns. In the main event, heavyweight champion Stipe Miocic defends his belt for the first time against Alistair Overeem. We’ll break down that fight and a few more.

We start on UFC FIGHT PASS in the welterweight division with Yancy Medeiros and Sean Spencer. A rangy fighter who pushes the pace, Medeiros comes off a decision loss to Francisco Trinaldo his last time out. A former Golden Gloves champion, Sean Spencer’s recent luck has been more like lead than any precious metal. He’s dropped three of his last four and his loss to Cathal Pendred was quite possibly one of the worst judging decisions in recent memory.

Neither fighter has any real interest in taking this fight to the ground. They’re both primarily boxers, but in different ways. Medeiros moves around a lot and prefers to attack in bursts. Spencer sits heavier in his stance in a traditional amateur boxer way and relies on a strong jab. He doesn’t move much, but still has capable defense and head movement (his significant strike defense rate is 60.21% compared to Medeiros’s 44.93%). Spencer could counter strike his way to a decision, but I worry about his lack of output. Medeiros often charges in to attack without properly protecting himself. In a lot of ways, he’s the perfect opponent, but Spencer lacks the power to put him away. Medeiros starts off shaky, but his pressure and pace lead him to the unanimous decision.
Get ready for UFC 203: UFC 203 Cheat Sheet | New fighters on the rise this weekend | Watch: Robin Black breaks things down | Under-the-radar fights | Stipe Miocic vs Alistair Overeem - Knockout Artists Fighting for the Title | Pre-order UFC 203 now!

We move to the women’s strawweight division for Jessica Andrade and Joanne Calderwood. Undersized at bantamweight, Andrade made her successful 115-pound debut with a second-round TKO over Jessica Penne at UFC 199. A fan favorite on season 20 of The Ultimate Fighter, we learned that Joanne Calderwood has a penchant for Muay Thai and baking carrot cakes. Good thing she seems like a nice person because outside of rum raisin, carrot cake has to be the worst cake flavor out there. I’d rather eat actual carrots for dessert than carrot cake.

Calderwood showed a lot of improvement in her last fight against Valerie Letourneau. She was lighter on her feet, increased her volume of strikes and even worked in a couple trip takedowns. She’ll need all those tools and more against Andrade. The Brazilian is a sprinter. She charges hard and throws power punches from her waist with reckless abandon. Calderwood does not have the best striking defense (45.24%), but her clinch game will protect her. As long as she can weather the initial rush, she’ll use Andrade’s aggression against her and score a trip takedown. Andrade has six submission wins, but they’re from power moves like guillotine chokes. Calderwood neutralizes Andrade’s power from top position and pulls off the upset decision victory.

That brings us to one of the most anticipated debuts in UFC history with CM Punk and Mickey Gall. If you don’t know the controversy surrounding CM Punk’s debut, I both admire you and hope you’re recovering well from that coma (did you know that guy from “The Apprentice” is running for president?). Discovered on an episode of “Looking for a Fight,” Gall earned this opportunity with a win over Mike Jackson back in February. 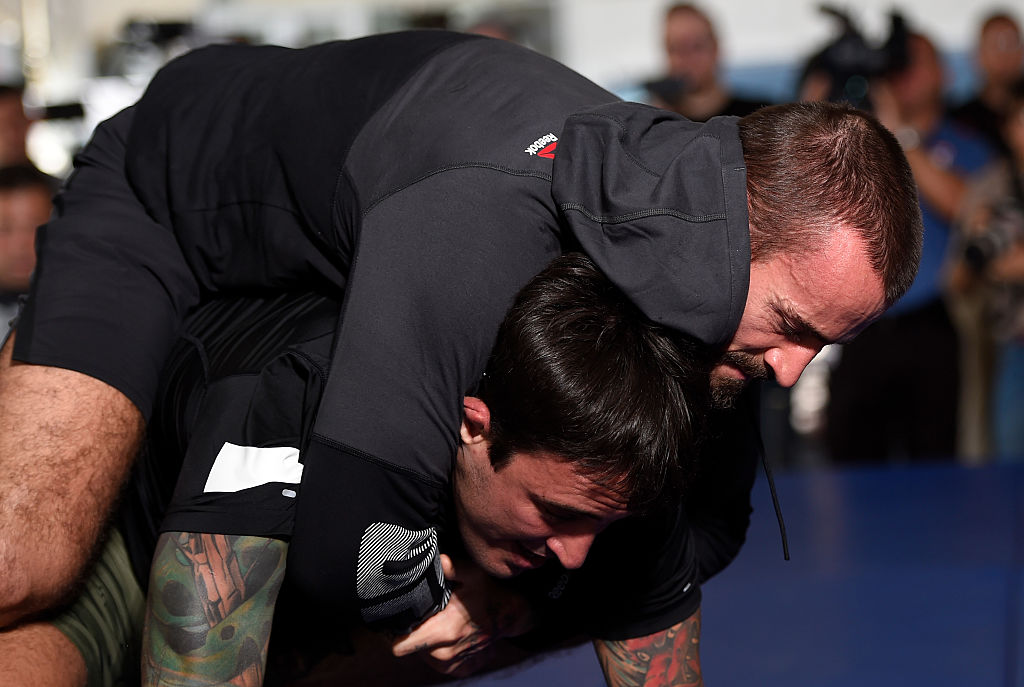 There are a lot of unknowns in this fight, which makes it difficult to predict. Lack of evidence hasn’t stopped that lady at the farmer’s market from trying to sell homeopathic cures, so it won’t stop me either. A lot of people have made a point to over-analyze Punk’s training footage from the “Evolution of Punk” series. I find that relatively useless for a number of reasons. That said, we do know a couple things. CM Punk is soon to be 38 years old and he’s taking on a 24-year-old Brazilian Jiu Jitsu brown belt with previous MMA fight experience. Gall attacks like a young fighter who thinks he’s invincible. He charges forward with only offense on his mind. It’ll cost him eventually, but not this weekend. He bull rushes, connects with a big right hand and cinches up the rear naked choke for the first-round submission win.

Time for the main event. Ohio’s own Stipe Miocic puts his belt on the line for the first time since beating Fabricio Werdum at UFC 198 in May. He’s 9-2 inside the Octagon, with six of those wins coming by KO. Once considered a “bust” after his initial UFC signing, the 36-year-old Overeem has matured the last couple years. He’s won four straight (three of them finishes) and looks to add another title to his illustrious career.

It’s not often that Overeem faces someone with more physical gifts than him, but that’s the case here. Miocic’s athleticism, quickness and right hand have been the cornerstone of his success. While many heavyweights will plod along, Miocic feints, fakes and weaves throughout the course of the fight. Overeem once fought with Miocic-like explosiveness, but he’s become a bit more cautious. He picks his opportunities to attack much better and leaves less openings than before. As I watched the tape, the most telling thing to me was how Miocic retreats. He runs straight backwards with his chin in the air. Yes, he KO’d Werdum with his right hand retreating in this manner, but it’s a dangerous game to play. In keeping with his last couple fights, Overeem will be relatively inactive for the beginning of the fight. He might even give away the first two rounds. Eventually, though, he’ll pick his shots and become your new heavyweight champion with a fourth-round TKO.

That wraps up another Downes Side more enjoyable than the day Lebron decided to return. Follow me on Twitter @dannyboydownes. Also, don’t forget to leave your own predictions, premonitions and propositions on the page here.