The Downes Side – UFC 201 Predictions 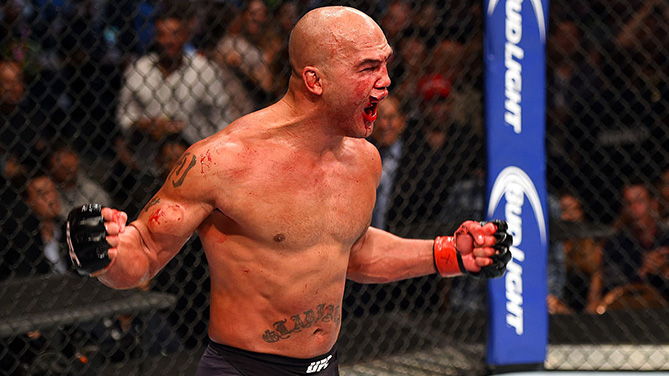 That’s right boys and girls, it’s time for another edition of the Downes Side! The political conventions in the U.S. are over, so now it’s time to get back to some cleaner, more wholesome fighting. Live from Philips Arena in Atlanta, Georgia, we have UFC 201. In the main event of the evening, Robbie Lawler defends his welterweight title against Tyron Woodley. We’ll analyze that fight and a lot more.

We start in the light heavyweight division with Nikita “The Miner” Krylov and Ed “Short Fuse” Herman. While I will always remember him as “Al Capone,” Nikita Krylov has been on a run no matter what nickname you use. Winner of four straight (all by finishes) the 24-year-old is a rising force in the division. A veteran of 19 UFC fights, Ed Herman will do everything in his power to delay that ascension.

This matchup perfectly encapsulates the differences between young fighters and veterans. Krylov comes out firing on all cylinders with one of the highest striking rates in the entire UFC. As his coach pointed out during his fight against Francimar Barroso, however, he can often “fight like a drunk man.” He gets so caught up in being offensive that he leaves himself open as he charges. Herman, on the other hand, is relaxed and picks his shots. He works counters well and controls clinch exchanges. That patience can sometimes bleed into inactivity, though. He knocked out Tim Boetsch in his last appearance, but he let the Barbarian control way too much of the fight. Krylov could run into a right hand, but his pace and flurry of activity will eventually wear Herman down. Krylov connects with one of his sneaky high kicks and finishes with a second-round rear naked choke.

We move to welterweight for Matt Brown and Jake Ellenberger. Brown has gone through a rough patch, losing three of his last four. The losses may have been against Robbie Lawler, Johny Hendricks and (most recently) Demian Maia, but that’s probably little consolation to him. Jake Ellenberger’s patch has been even rougher – he’s lost five of his last six.

Matt Brown is a flurry of violence on his feet. Punches, kicks, knees and elbows fly from every direction. When Demian Maia parked him on the ground for fifteen minutes, that flurry became a dusting. Ellenberger has the potential to accomplish a similar task, but his wrestling has been non-existent lately. He’s relied on his power punching as his first and last line of attack. Brown’s eagerness to fight in the clinch often leaves him vulnerable, especially after he throws his right hand, as he reaches and exposes his chin. He also opens himself up as he breaks the clinch. Ellenberger could drop him at either one of these moments, but my money (and by money I mean inflated sense of expertise), is on Brown. Sure, he can be a little wild, but his pace and volume carries him to the unanimous decision.

That brings us to a fight which could determine the next women’s strawweight title challenger. Runner-up on season 20 of The Ultimate Fighter, Rose Namajunas has won three straight. Karolina Kowalkiewicz made her UFC debut on short notice and made the most of it with an upset win over Randa Markos. She followed that up with a win over Heather Clark and now finds herself at the No. 5 spot in the 115-pound rankings.
RELATED: Watch UFC 201 Countdown: Namanjunas vs. Kowalkiewicz | UFC 201 Embedded - Episode 1, Episode 2, Episode 3, Episode 4 | Read: Reasons to watch UFC 201 | Pre-order UFC 201 Pay-Per-View | Namajunas ready to meet title expectations

Namajunas has two different personas on the feet. She can be patient and methodical using side kicks and straight punches. She can also transform into “Thug Rose” and swarm opponents with everything she has. Kowalkiewicz has a more traditional Muay Thai approach. She favors the orthodox stance, but can kick from either stance. Her best attribute, though, is her boxing. Namajunas’s upright stance makes her legs susceptible to low kicks. If Kowalkiewicz can exploit this, she would limit her opponent’s dynamism and start to tag her with her boxing attack. This is a close fight as a kickboxing match, but the balance of power shifts considerably in MMA. Namajunas may land a takedown or pull guard when Kowalkiewicz attacks in the clinch. Either way, this fight goes to the ground and that’s where she has a distinct advantage. She wins by second-round submission.

Time for the main event! Robbie Lawler defends his title for the third time after beating Carlos Condit back in January. The most dangerous left-handed man since Billy the Kid, 20 of his career wins have come via knockout. Tyron Woodley has all the tools to add to the count of recent title changes. After his loss to Rory MacDonald, he’s bounced back with wins over Dong Hyun Kim and Kelvin Gastelum.

A lot of people are overlooking this fight and already planning Lawler vs. Stephen Thompson. They do so at their own peril. Woodley may not have the pure striking of Lawler, but he has hand speed and a ton of power. He works on the outside and closes the distance to his target faster than anyone in the division. Lawler often falls out of his stance when he’s retreating. If Woodley can connect with that right hand and chain it together with a takedown, he could limit Lawler’s attack. Given Lawler’s propensity for close fights, a timely takedown could be the difference. The key here will be footwork. Lawler likes to pressure and Woodley puts himself against the cage. If Lawler can back him into the fence, he could seriously limit Woodley’s offensive capabilities. Woodley will command the first couple rounds. I don’t know if he will be able to sustain it for five rounds, though. It’ll be another tight call, but Lawler walks away with the decision win.

That wraps up another unconventional Downes Side. Follow me on Twitter @dannyboydownes. Also, don’t forget to leave your own predictions, thoughts and analyses on the page here. For the love of whatever you hold dear, though, just don’t talk politics.