The Downes Side – UFC 200 Predictions

That’s right boys and girls, the wait is finally over. You finally get to read another thrilling edition of The Downes Side! Oh and uh, that UFC 200 thing is going on, too.

Live from Las Vegas, Nevada, perhaps the most stacked fight card in UFC history takes place. In the main event of the evening, Brock Lesnar returns to action to take on “The Super Samoan,” Mark Hunt. We’ll break down that fight and a few other contests. 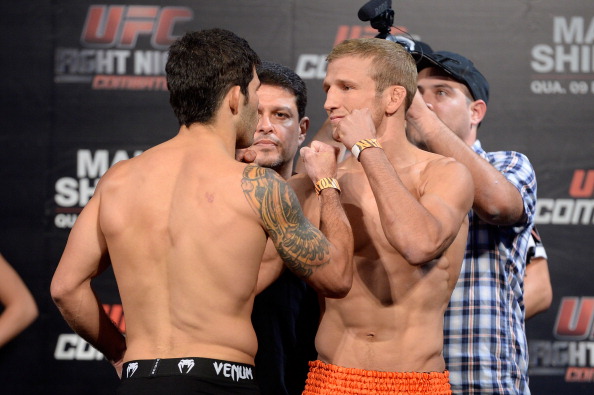 We start in the bantamweight division with TJ Dillashaw and Raphael Assuncao. The two first fought in October 2013 and a lot has changed since then. Assuncao has battled injuries and hasn’t fought since October 2014, while Dillashaw won four straight and grabbed the 135-pound title. He lost the belt in January and could use this fight to make his case for another shot.

Dillashaw has changed a lot since the first time these two met. He’s quicker, and utilizes much more movement. His volume approach and different looks have confused opponents, but Assuncao presents a new look he hasn’t seen since adopting his new style. Assuncao is a counter striker. Dominick Cruz counter strikes well, but they have very disparate styles. Cruz dodges and resets. Assuncao, on the other hand, is much more subtle in his movements. He prefers to stay in the pocket, slip and then throw power shots back. Why does this matter? Because when Dillashaw misses, he can fall out of his stance. He recovers quickly, but there are momentary openings. Despite that, Dillashaw still wins. Not because of striking, but wrestling. Assuncao scrambles well and defends takedowns at a high percentage, but the pacing will wear him out. He likes to lull opponents into inactivity and Dillashaw won’t fall for it. He begins his comeback with a unanimous decision.

Next we shift to the featherweight division for the interim title fight between Jose Aldo and Frankie Edgar. Jose Aldo competes for the first time since losing his belt to Conor McGregor in 13 seconds. Before that, he had won 18 straight. Undefeated since losing to Jose Aldo at UFC 156, Edgar has another chance to reclaim UFC gold.

Their first fight may have been about 3.5 years ago, but both fighters are largely the same. They’ve absolutely improved, but their tactics and styles are roughly unchanged. Edgar has a high motor and uses his movement to avoid damage and wear opponents down. The one wrinkle he’s added, though, was apparent in the Mendes fight. His angles have become much sharper and he used slight step backs to sneak in counter punches on a charging Mendes. Aldo didn’t show us much in the McGregor fight, but he’s still a ferocious striker who has the sharpest leg kicks in the organization. He used leg kicks to beat up Edgar in their first fight, and he’ll do the same here. Before he knocked out Mendes, Edgar was still absorbing a high percentage of low kicks. Couple that with Edgar’s tendency to short arm his punches compared to Aldo’s long, stiff jab, Aldo has the striking superiority. What about the wrestling? One fun stat that you hear people throw out is that Frankie Edgar is the only person to take Jose Aldo down more than once in a fight. That may be true, but it neglects one important fact – Edgar was 2 for 11. As long as Aldo doesn’t run straight ahead, this fight plays out like the first. Aldo brushed off the majority of takedowns, pops his jab, rips low kicks and regains the (interim) featherweight championship.
MORE FROM UFC 200: Edgar plans to start fast | Robin Black previews Lesnar vs Hunt | Miesha Tate on The Exchange

We move to the women’s bantamweight division for Miesha Tate and Amanda Nunes. “Cupcake” Tate defends her belt for the first time since beating Holly Holm at UFC 196. Work(wo)manlike, she doesn’t necessarily overwhelm opponents in any one facet, but she gets stronger as fights progress and wears adversaries out. The “Lioness” Nunes holds a 5-1 record inside the Octagon, with four of those wins being first-round finishes. 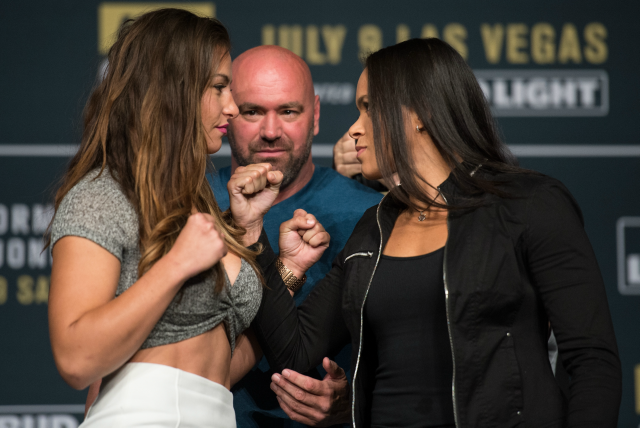 Whether it’s a methodical counter striker like Holm or a more aggressive, wide open one like Jessica Eye, Miesha Tate starts the same way – slow. She eventually caught Eye with an overhand right and exposed Holm’s submission defense, but she still takes too much damage. The big question mark for Nunes is her gas tank. She’s shown more patience in every fight, but she still tires out. In a three-round fight, you can go into survival mode in the third and eke out a win. In a five-round fight against Miesha Tate you’re going to lose. We talk about volume strikers, but Tate is a volume wrestler. She may only convert 34.18% of her takedowns, but she’s relentless. Nunes has respectable takedown defense, but she falls out of her base stance when she retreats. Tate is very good at capitalizing on people’s mistakes and could exploit this to keep Nunes on her back. Tate’s will to win has few equals in MMA, but you can’t keep putting yourself in danger and expect to win in the end. Nunes pulls the upset and wins with a first-round TKO.

Time for the main event! The Anomaly. The Next Big Thing. The Conqueror. The Freak. Those are only a few names used to describe Brock Lesnar. A former UFC heavyweight champion, he returns to the Octagon for the first time since December 2011. Another anomaly in his own right, Mark Hunt went from being offered the opportunity to get paid to not fight to becoming a top 10 heavyweight. Still one of the hardest hitters in the division, he’s coming off back-to-back first round KOs of Antonio Silva and Frank Mir.

We know that Brock Lesnar isn’t what you would call a “technician.” When you have his athletic abilities, though, you can get away with things. Brett Favre wasn’t known for his fundamentals, but he’s still a Hall of Fame quarterback. Even at 38, Lesnar could still be considered the best athlete in the division. Lesnar’s nine-inch reach advantage is an important aspect of this fight, but not in the traditional sense. Normally, you worry about the taller fighter keeping the shorter fighter at the end of his jab. In this case, you worry about Hunt having to close that distance. Lesnar throws with so much force that even if it doesn’t land flush, it’ll be enough to stun Hunt and finish the takedown. Having said that, Hunt probably won’t have to worry about closing the distance. In the Overeem fight, Lesnar stood on the outside and tried to avoid running straight forward. I think he does the exact opposite here. He’ll rush, Hunt sneaks in an uppercut and stuns him. Then as Lesnar recovers, Hunt pours it on and walks away with a first-round TKO.

That wraps up another much-anticipated version of The Downes Side. Follow me on Twitter @dannyboydownes. Also, don’t forget to leave your own predictions, thoughts, insecurities or ideas for the worst competitive eating contest on the page here. I was going to pick mayonnaise, but then I heard that about the kale one. Does anyone seriously like kale?