The Downes Side: UFC 198 Predictions 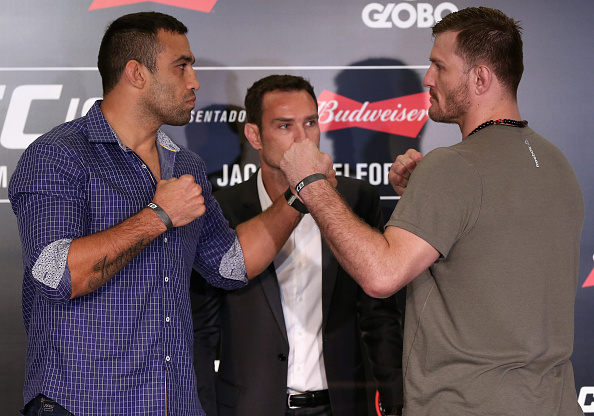 That’s right boys and girls, it’s time for another Brazilian edition of the Downes Side. This weekend the Octagon sets down in Curitiba, Brazil for UFC 198. Live from Arena da Baixada, Fabrico Werdum defends his heavyweight title against Stipe Miocic. In the co-main event of the night, Ronaldo “Jacare” Souza and Vitor Belfort fight for positioning in the middleweight title picture.

We start in the welterweight division with Demian Maia and Matt Brown. Maia extended his current win streak to four with a decision win over Gunnar Nelson at UFC 194. We all know that Maia is an amazing jiu-jitsu artist, but he’s a complete grappler, so don’t underestimate his wrestling. When it comes to violence, no one is more creative or embraces it like Matt Brown. The “Immortal” one stopped his two-fight skid with a first-round guillotine over Tim Means last July.

Maia has made strides with his striking, but grappling is his bread and butter. Matt Brown can grapple, but he’d much rather throw elbows and knees. It’s entertaining for fans, but it places him in bad positions. He tries to throw his knees and elbows at a jabbing range. That means that he’s too far away and it often causes him to fall out of his stance. Maia could use this to his advantage, but he doesn’t even have to wait for Brown to make a mistake. Brown forces the clinch and I don’t think he beats Maia in a clinch fight. Maia doesn’t have the best takedown conversion rate, but he’s relentless in the pursuit. Like a volume puncher, his persistence pays off and he wins by unanimous decision.

Next we move to a women’s catchweight fight between Cris Cyborg and Leslie Smith. Madonna. Prince. Meatloaf. Cyborg. Certain artists only need one name. Cyborg makes her much-anticipated UFC debut and tries to prove to fans why many consider her the most dominant female fighter in the world. Leslie Smith could immediately make herself a star with the upset win. After nearly losing her ear against Jessica Eye, Smith came back with a win over Rin Nikai in March.
RELATED CONTENT: Cyborg's welcoming opportunity | Cyborg returns home on Embedded | Leslie Smith ready for fight of her life | Cyborg ready to be placed amongst legends

Cyborg is an incredible fighter, but if there’s anything we’ve learned over the last few months, it’s that nobody is invincible. She has incredible KO power and doesn’t just throw wild, kill shots. She works her combinations and possesses a lot of technical skill. Her hunt for the finish, however, could be described as overzealous. This causes her to fall out of her stance, lose her base and leave openings for counter attacks. Smith’s punches will find their mark, but she’s not a power puncher. She likes the “war of attrition” style where she stands in the pocket and eats punches to give a couple back. Going shot for shot with Cyborg is like going shot for shot with my Uncle Joe -- you’re going to go to sleep. Cyborg by first-round TKO.

That brings us to Ronaldo “Jacare” Souza and Vitor Belfort. A split decision loss to Yoel Romero ended Jacare’s eight-fight win streak. That may have slowed his path to a title shot, but he could regain a lot of momentum with a win here. Belfort could also accelerate his path to another title shot. After losing to then-champion Chris Weidman at UFC 187, Belfort punctuated his Dan Henderson trilogy with a blistering first-round knockout in November.
Belfort may be the underdog in this fight, but there are a lot of similarities between this fight and the Henderson one. Yes, Hendo doesn’t have the submission prowess of Jacare, but they both rely on their right hand. It’s a dangerous weapon, but it can become a crutch. That’s part of the reason why he only lands 43.4% of his significant strikes. Both fighters are very patient and will wait to explode. This plays into Belfort’s strengths since he’s not exactly known for his endurance (only two of his last ten fights have made it out of the first round and none of them have gone to a decision). The 39-year-old phenom pulls the upset with the second round TKO.

Time for the main event! Fabricio Werdum cemented himself as the heavyweight champion with his third-round submission win over Cain Velasquez at UFC 188. He has 10 career submission victories, but he’s rounded out his skill set to become a total threat. After losing to Junior Dos Santos, Miocic has strung together back to back wins over Mark Hunt and Andrei Arlovski.

After watching the film, this fight is much closer than I initially fought. This fight plays into each fighter’s strengths on the feet. Miocic is a much better counter puncher than aggressor (he leaves a lot of openings when he moves forward) and Werdum does much better moving forward than countering. Werdum leads with his jab well, but leaves it hanging on the retreat, which could play to Miocic’s right hand. Miocic, on the other hand, doesn’t tighten his guard in the clinch and could eat some big knees from Werdum.
RELATED CONTENT: Free Fights: Miocic vs Shane Del Rosario | Werdum vs Velasquez | Joe Rogan previews Werdum vs Miocic | UFC 198 Open Workout highlights

Miocic once relied solely on his cardio and boxing to win fights. While he still doesn’t have the most diverse striking attack, his fight against Mark Hunt showed how he’s improved his MMA wrestling. Werdum willingly lets himself get taken down because he has so much belief in his guard. I don’t think that Miocic can hold Werdum down, but timely counter strikes and opportune takedown attempts will make Stipe Miocic the new heavyweight champion via unanimous decision. Finally, Ohio will have something to celebrate.

That wraps up another edition of the Downes Side. Follow me on Twitter @dannyboydownes. Also, don’t forget to leave your own comments, predictions, words of encouragement, conspiracy theories and other helpful tips on the page here.