The Downes Side – UFC 196 Predictions

Conor McGregor and Nate Diaz may not give a (you know what), but you should give a [darn] about this week’s Downes Side!

We may have been denied the chance to see a simultaneous two-division titleholder, but we have gained something just as good. Yes, live from the MGM Grand Garden Arena in Las Vegas, Nevada, we will see the 209 vs the 353 in a welterweight matchup. In the co-main event, UFC women’s bantamweight champion Holly Holm defends her title for the first time against Miesha Tate. Turn off the parental controls, it’s fight time!

AMANDA NUNES VS. VALENTINA SHEVCHENKO
We begin the main card in the women’s bantamweight division with Amanda Nunes and Valentina Shevchenko. An intimidating Muay Thai striker, Nunes suffered her only UFC loss to Cat Zingano at UFC 178. Since then, the “Lioness” has roared back with two straight first-round wins over Shayna Baszler and Sara McMann. “Bullet” Shevchenko gutted out a split decision win over Sarah Kaufmann in her UFC debut.

Both fighters possess formidable offensive striking. The gap defensively, however, is quite large. Shevchenko hit Kaufmann with practically everything she threw. Unfortunately, she only defended 38.64% of the strikes thrown at her. Kaufmann is a good striker, but she’s not that good. Nunes can fade as the fight progresses, but she’ll do enough damage in the first two rounds to pick up the unanimous decision. 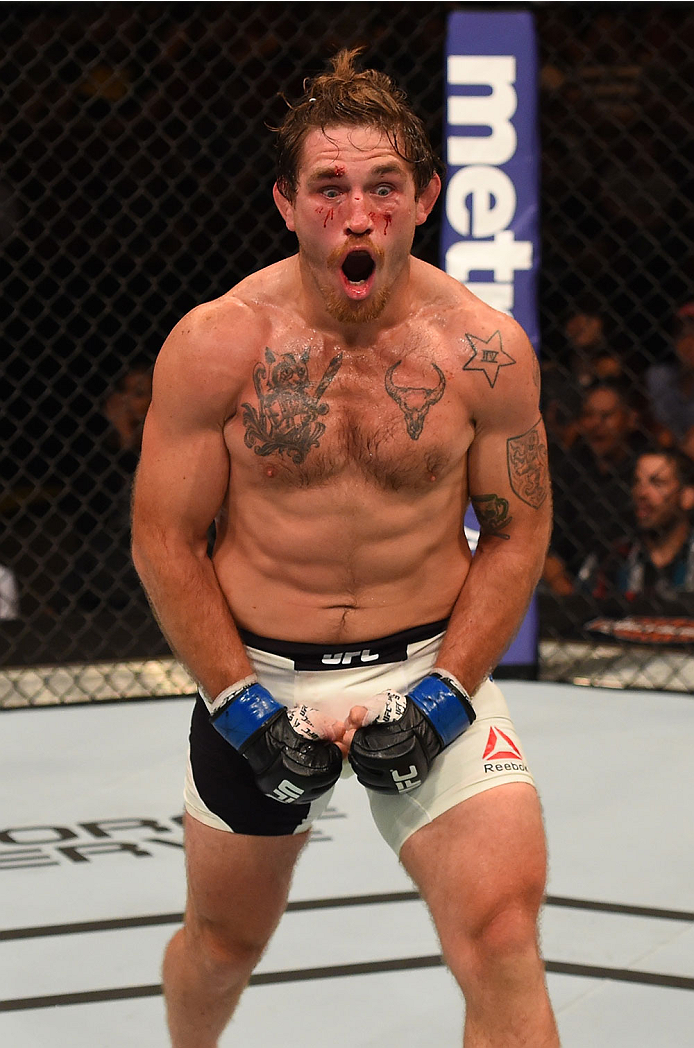 Next, we move to light heavyweight for Corey Anderson and Tom Lawlor. A former Division III collegiate wrestler, Anderson rides a two-fight win streak since the first loss of his career to Gian Villante back in April of last year. “Beastin’ 25/8” refuses to be constrained by the confines of Earth’s axis, much less 205-pound men. While Tom Lawlor may subscribe to the restraints of the Gregorian Calendar, he puts a win streak of his own on the line. Lawlor even knocked out Villante in his last fight.

Oh, MMA math. You’re about as useful as that statistics course I took in college. Lawlor won’t win because he beat Villante and Villante beat Anderson. He’ll win because Anderson doesn’t do well when he’s the one being pressured. He likes going forward and grinding, but struggles to counter. Anderson does have a distinct power advantage, but he doesn’t know how to use that power to finish. Lawlor pushes the pace and locks up a late submission to pull the upset.

GIAN VILLANTE VS. ILIR LATIFI
We stay at light heavyweight for Gian Villante and Ilir Latifi. Since he’s already been mentioned, here’s where we test reading comprehension. After handing [blank] the first loss of his career and then losing to [blank] by TKO, Villante bounced back with a TKO win over Anthony Perosh at UFC 193. He better watch himself because Latifi has some power in his hands. “The Sledgehammer” has pounded his way to two straight TKO wins in a combined time of 1:26.

This is the closest thing to a toss-up on the entire card. Both fighters have KO power, but they’ve also suffered knockouts through defensive lapses. The question then becomes, “Whose defense fails first?” Latifi is the less accurate striker (27.95% vs. 48.73%). Those stats are a bit skewed, though. In his fight against Mousasi, he only landed 18 of 112. Considering that his last two fights have been shorter than the average commercial break, the numbers are misleading. Actually, now that I think of it, maybe that statistics class wasn’t a waste. Latifi by second-round TKO.

HOLLY HOLM VS. MIESHA TATE
We return to women’s bantamweight for the co-main event. You may be tired of seeing Holm’s highlight reel KO over Ronda Rousey, but not nearly as tired as Holly is of telling people her name isn’t Holly Holmes. We all know about Holm’s boxing, but she’s also an effective kicker that watches her range and commands distance unlike many others in MMA. “Cupcake” Tate earns another spot to claim the belt. A relentless, hard-nosed grinder, she only knows one direction on a fight – forward.

I understand people’s suspicion when it comes to pre-fight hype, but Miesha Tate really does present Holm difficulties that Rousey did not. Her takedowns may be inaccurate, but she does a good job of smothering opponents against the fence and preventing them from getting their attacks off. Rousey wanted to outbox Holm, but Tate has no such inclinations. She’ll stand in the pocket and trade, but her first and last concern is getting that takedown. She’ll trouble Holm early, but the champ will eventually get Tate’s timing down and start unloading. Holm by third round TKO. 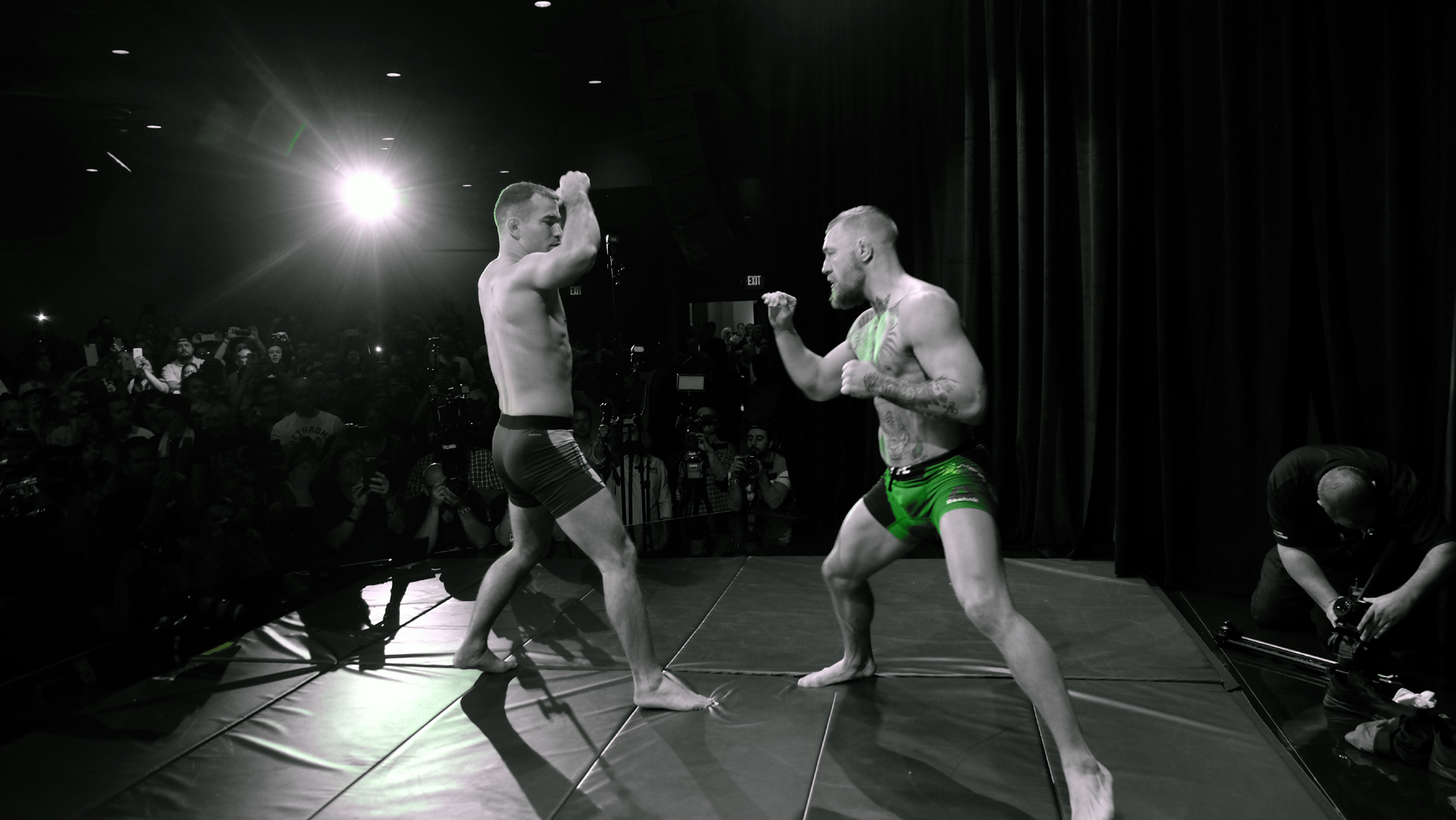 CONOR MCGREGOR VS. NATE DIAZ
Time for the main event! Three months removed from knocking out Joes Aldo in 13 seconds, Conor McGregor had his eyes on a second belt, one held by lightweight champion Rafael Dos Anjos. A broken foot may have thrown a wrench in his plans, but he plans on throwing some capoeira kicks at Stockton’s favorite son, and at 170 pounds no less. He’s even predicted a first-round knockout. Nate Diaz can prove “Mystic Mac” wrong and revitalize his position as a title challenger. He’s fresh off an impressive win over Michael Johnson.

I’ll admit that I’ve been a bit slow to give McGregor his kudos. He’s certainly an excellent fighter, but I still see defensive lapses and I thought Jose Aldo would exploit them. McGregor excels when his opponent is the aggressor. His timing and power make him as formidable a counter striker in all of MMA. We know both fighters will taunt and goad the other to engage on their terms, but who will bite? McGregor will only be half right with his prediction. He’ll finish Diaz, but it won’t be until the second round. McGregor via TKO.

That wraps up another PG edition of the Downes Side. If you give a [fudge], follow me on Twitter @dannyboydownes. If you find another spare [funk], leave your own predictions, comments, compliments and favorite edits on the page here.