The Downes Side: UFC 189 Predictions 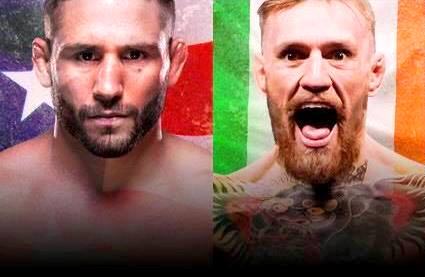 That’s right boys and girls, it’s time for another edition of the Downes Side! Sure, it may not be Aldo vs. McGregor, but it’s still pretty good.

As International Fight Week rolls into this weekend, so does UFC 189. Live from the MGM Grand Garden Arena in Las Vegas, Nevada, Chad Mendes and Conor McGregor face off for the interim featherweight title. In the co-main event, Robbie Lawler defends his welterweight belt against Rory MacDonald.

We open up in the bantamweight division with Brad Pickett and Thomas Almeida. A WEC vet who’s never afraid of a scrap, Pickett has dropped his last two fights to Chico Camus and Ian McCall. An undefeated prospect, the 23-year-old Almeida has finished all but one of his opponents. He holds 14 career KOs and dropped Yves Jabouin in the first round his last time out.

Pickett may have some wear and tear, but he’s still dangerous. He’s capable everywhere, but he needs to bring this fight to the ground. Almeida is the far more dangerous striker, landing significant strikes at an insane 7.82 strikes per minute rate. Pickett may be nicknamed “One Punch,” but Almeida attacks with flurries of punches. “Multiple-Punch” just didn’t do well in focus groups. Pickett will try to slow the pace, but he’ll eventually get overwhelmed by Almeida’s attack. “Thomhinas” via TKO in the second.

Next we move to welterweight for Gunnar Nelson and Brandon Thatch. A Brazilian Jiu-Jitsu ace with a karate background, Nelson tries to rebound from the first loss of his career to Rick Story back in October. One of the largest and most aggressive fighters in the division, Thatch is coming off the first loss of his UFC career to Benson Henderson. Every single one of Thatch’s eleven career wins have come in the first round (8 KOs, 3 submissions).

Nelson has been called undersized for the division, and that fact was readily apparent in his loss to Story. Now he’s facing an even bigger welterweight. Now, it’s easy to dismiss Thatch’s size advantage seeing that he just lost to someone who fights a lightweight, but that’s like comparing apples and something dissimilar to apples. The biggest difference being that this is a three-round fight. Thatch’s hasn’t learned how to pace himself (when you win in the first round, why bother?), and that hurt him in a five-round fight. He’ll probably fade here, but they’ll be heading to the judges’ scorecards by the time Nelson can take advantage. Thatch bullies his way to a decision win.

Now we drop to featherweight for Dennis Bermudez and Jeremy Stephens. Coming off a loss to Ricardo Lamas, Bermudez had won seven in a row prior to that. Originally a wrestler, he’s rounded out his skill set and blisters opponents with his brute force and cardio. A twenty-fight veteran of the UFC, Stephens has some of the heaviest hands in the division. He still always looks for the knockout, but he’s been able to refine his kickboxing and disguise his power strikes better since dropping to featherweight.

This is a big fight for both of these guys. They both had some momentum going, but another loss could earn them the dreaded “gatekeeper” status. Bermudez may be the better overall fighter, but he has a suspect chin. Stephens has matured his striking beyond that of a brawler. He’s still swinging for the fence, but he sets up his power punches better and doesn’t leave himself out of position as much anymore. As Bermudez moves in for a takedown, Stephens clips him with an uppercut and ground and pounds his way to a first round TKO.

That takes us to the first title fight of the night. Robbie Lawler returns to the Octagon for the first time since winning the title from Johny Hendricks in December. A dangerous southpaw striker with 19 career KOs, he likes to be right in his opponent’s face. Since losing to Lawler at UFC 167, MacDonald has gone on to beat Demian Maia, Tyron Woodley and Tarec Saffiedine. An intelligent striker whose jab is as sharp as his three-piece suits, he also has some of the best takedowns in the division.

The “smart” money seems to be on MacDonald, but MacDonald has a better chance of getting that “Red King” nickname to stick than winning here. I mean, how do you “officially” change your nickname? Do you have to register them with the National Gimmick Association? Anyway, MacDonald may be the better MMA wrestler than Hendricks, but I don’t see how he holds Lawler down for extended periods. The deciding factor for me, though, is how MacDonald can wait rounds away. He’s brilliant in flashes, but he often allows opponents to back him down and take control of rounds. Lawler finds a way to take at least three of them and he retains his title by unanimous decision.

Time for the main event! Chad Mendes steps in for an injured Jose Aldo on short notice.  After losing to Aldo for the second time back in October, Mendes bounced back with a first-round drubbing of Ricardo Lamas in April. Known for his wrestling, he’s really improved his striking over the last few years and five of his last six wins have come via KO. Love him or hate him, the “Notorious” Conor McGregor has taken the MMA world by storm. In only five fights in the UFC, he’s made himself one of the highest profile athletes in the entire sport. A striker with devastating power and dynamic kicks, he can finish opponents with a single punch.

There are a lot of different levels to this fight. McGregor may be the better pure striker, but he does leave himself open to counters. Especially when he finishes a combination, he often has his feet out of position. He’s been getting away with it thus far because he’s been faster than all his opponents. He doesn’t have the same speed advantage here. Having said that, I think we’ll see a much less aggressive McGregor in this fight. He’ll have Mendes bring the fight to him, and try to counter attack. In that case, I worry that Mendes won’t be able to close the distance and set up his takedowns. It won’t be incredibly flashy, but Conor McGregor wins by decision.

That wraps up another edition of the Downes Side. Follow me on Twitter @dannyboydownes. Also, don’t forget to leave your own predictions, thoughts, comments and eventual Conor McGregor love/hate dialogue on the page here.