The Downes Side: UFC 188 Predictions 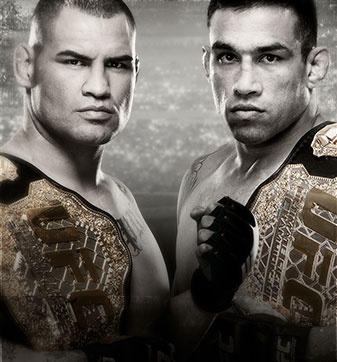 Hola amigos! It’s time for another edition of the Downes Side en español! Actually, now that I think about it, that will probably be all the Spanish I cover for today.

It doesn’t matter what language you speak (although if you can’t read English you’re probably not bothering with this), we all speak the language of combat. Live from the Mexico City Arena, Cain Velasquez makes his highly-anticipated return to the Octagon against Fabricio Werdum. In the co-main event of the night, Eddie Alvarez and Gilbert Melendez try to get back to their winning ways. Dios mío! It’s fight time!

We begin the main card in the women’s strawweight division with Tecia Torres and Angela Hill. Housemates on season 20 of The Ultimate Fighter, both fighters love to strike. Initially one of the favorites to win the season, two (unofficial) losses have hurt Torres’s momentum. Despite that, she used her volume striking to dominate Angela Magana in her UFC debut. Despite her relative inexperience, Hill is an athletic, aggressive Muay Thai striker who dominated Emily Kagan at the TUF 20 finale.

Torres has great output, but it often lacks purpose. While most fighters fall victim to only throwing single shots, Torres throws too many. She wastes a lot of movement, and it takes its toll as the fight progresses. This is especially evident when she finishes her combinations and loses her stance after she kicks. Hill could fall have a hard time finding her range, but she’ll shift into “Overkill” and take the decision.

Next we move to featherweight for Yair Rodriguez and Charles Rosa. Rodriguez steps into the Octagon for the first time since winning TUF Latin America. Well-rounded, he pairs his kicking game (he has a taekwondo background) with an aggressive ground game. After dropping his UFC debut to Dennis Siver, “Boston Strong” Rosa bounced back with a submission win over Sean Soriano. Rosa, too, is a dynamic striker who rarely takes the foot of the gas pedal (which explains why he doesn’t have a drivers license).

There’s no telling how much Rodriguez has improved since his last appearance in the Octagon. He’s a young fighter and has been able to dedicate time to training like never before. There’s also no telling what’s actually in a hot dog. What’s the point? The point is, I’ll eat hot dogs despite the unknown and I’ll still make predictions. Why? Because I’m the Nostradamus of MMA.

Rodriguez is still raw. He leaves a lot of gaps and puts himself in poor positions. Rosa may not be ready for the top 10, but he’s much further along in his development. Rodriguez couldn’t defend relatively basic strikes in his last fight, so Rosa’s angles will give him more trouble. Rosa by decision.

We jump to middleweight for Kelvin Gastelum and Nate Marquardt. Gastelum’s brief move to welterweight was about as successful as the movie Entourage at a critic’s screening. Now that he’s back at middleweight, let’s hope he doesn’t get distracted by the moment. A former Strikeforce champion, Nate “The Great” Marquardt’s present has been anything but. Holding a 1-4 record in his last five fights, he really needs a win here to get back on track.

Now that Gastelum is back to the right weight class, he shouldn’t have any problems here. Wresting may be his base, but he’s developed a wider variety of skills to compliment it. He may not know as much as Marquardt, but Nate’s recent performances make it hard to trust him. Gastelum by TKO in the first.

That brings us to lightweight for Gilbert Melendez and Eddie Alvarez. Coming back from the first submission loss of his career to then-champion Anthony Pettis, the #4 ranked lightweight can get back into the mix with a victory. Wading through legal battles to get to the UFC, Eddie Alvarez dropped his premiere to Donald Cerrone last September.

Melendez can keep the same pace in the first round as he does in the third. He defends 65.88% of strikes and knows how to blend in his wrestling to keep opponents guessing. Alvarez, on the other hand, likes to explode from the gate and overwhelm his target. He does possess a strong wrestling game, but he’s prone to brawling. This will give him some initial success, but he won’t be able to maintain it throughout the fight. El Niño (Spanish for “The Nino”) will counter, circle and mix in a couple takedowns of his own to take the decision.

Time for the main event! Climbing into the Octagon for the first time since October 2013, Cain Velasquez looks to pick up where he left off. One of the most dominant heavyweights in MMA history, his cardio and striking volume are unprecedented in the division. After locking up a title of his own when he TKO’d Mark Hunt in November, Werdum can remove the “interim” caveat.

We won’t know how/if Cain’s injuries have affected his overall game until he steps into the cage. So until we have video evidence to the contrary, we have to assume he’ll be the same fighter that was wrecking shop. Werdum may have some of the best jiu-jitsu in the division, but he’s never had Cain Velasquez on top of him. His striking has improved (and Velasquez has absorbed some heavy shots before), but he won’t have the opportunity to sit down on his shots and get comfortable. Velasquez wins by second round TKO.

That wraps up another excelente edition of the Downes Side. Follow me on Twitter @dannyboydownes. Also, remember that it doesn’t matter if you’re bilingual, bipedal, bifurcated or a bifocaled biologist riding a bicycle. You’re more than welcome to leave a prediction of your own on the page here. Just don’t be a bigot.