The Downes Side: UFC 187 Predictions 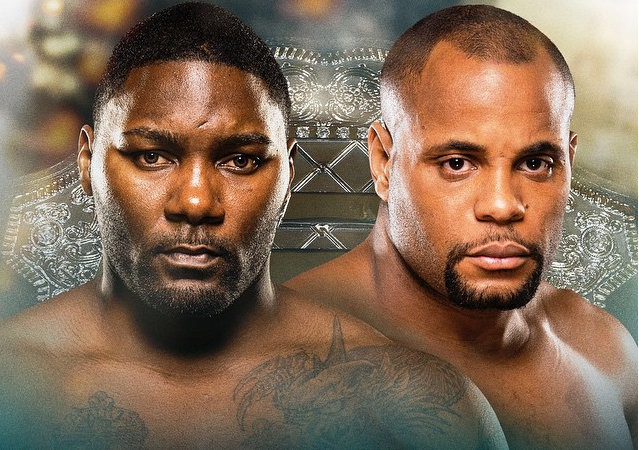 That’s right boys and girls, it’s time for another double championship edition of the Downes Side! Make sure to tell all your emo friends that the UFC is taking back the two belts thing.

Turn down your My Chemical Romance CD and turn up the volume on your TV, because the UFC is live from the MGM Grand Garden Arena in Las Vegas, Nevada for UFC 187. In the main event of the evening, Daniel Cormier and Anthony Johnson will crown a new light heavyweight champion. In the co-main event, Vitor Belfort gets another shot at the middleweight title as he takes on Chris Weidman. Who needs eyeliner? It’s fight time!

We open up the main card in the featherweight division with former title contenders Joseph Benavidez and John Moraga. The only losses in Benavidez’s flyweight career have come to champion Demetrious Johnson. Bearing that in mind, the #2 ranked 125-pound fighter needs a statement to keep the prospects of title shot #3 going. A power puncher with eight career submission victories to his credit, Moraga looks for three straight wins after beating Willie Gates and Justin Scoggins.

A grappler in his early career, Benavidez has intelligently designed himself into a well-rounded fighter. He has KO power in his hands and has found ways to blend his striking into scrambles that benefit his athleticism. The one flaw in his game is that he acts like most of us when we’re at work - busy for busy’s sake. The wasted movement and unnecessary activity leaves him prone to counter attacks. Moraga could drop him with a sharp counter, but he’ll probably spend too much time on his heels. Benavidez by second round submission.

We go from the lightest guys in the organization to the biggest for a heavyweight tilt between Travis Browne and Andrei Arlovski. Unfazed by a disappointing performance against Fabricio Werdum, Travis Browne returned to the Octagon and easily dispatched Brendan Schaub in the first round. He may have 13 KOs, but “Hapa’s” footwork and speed for the division is his greatest attribute (well, that and those nasty elbows against the cage). Undefeated since his return to the UFC, Andrei “Pit Bull” Arlovski has wins over Brendan Schaub and a first round knockout over Antonio Silva. Known for his boxing, he also defends takedowns at an 85% rate.

If were to ask you back in 2011, “Who’s going to retire first -- Andrei Arlovski or LMFAO?” who would you have said? Arlovski had lost four fights in a row (three by KO) and looked lost. Meanwhile, Red Foo and Sky Blue were showing us how sexy they were. Well, all that party rockin’ comes with a price and the Pit Bull is still here. Sure that introduction was just an excuse to link to their video, but we also know how this fight is going. I maintain that that Arlovski’s “glass jaw” charge is ill-founded (he hasn’t been KO’d since 2011), but much like KISS, there’s always time for an eighth comeback. Browne by first round TKO.

We drop to lightweight for Donald Cerrone and John Makdessi. Everyone’s favorite Budweiser-fueled cowboy outside Don Jeanes, Donald Cerrone steps into the Octagon searching for his eighth win in a row. After dispatching of Shane Campbell in the first round less than a month ago, John Makdessi steps in on short notice for an injured Khabib Nurmagomedov. A striker with backgrounds in taekwondo and karate, he does his best damage inside the pocket.

Much like Cassius, Donald Cerrone likes nothing better than tempting the gods. From extreme sports to his “spend all my money” investment planning, he’s just not the type of guy that knows caution. We admire him for his fight anyone at any time personality, but it’ll will cost him. Not today, but some day. Cerrone may expose himself early in fights, but Makdessi won’t be able to capitalize. He works best when he’s moving forward and Cerrone won’t let that happen. Cerrone by decision.

Finally! That brings us to Chris Weidman and Vitor Belfort. Delayed by multiple injuries, Weidman steps in the Octagon for the first time since defeating Lyoto Machida in July. An All-American Division I wrestler, Weidman has developed an elite striking game in a relatively short amount of time. The man who laughs at your “dad bod,” 38-year-old Vitor Beflort gets another shot at UFC gold. A man who doesn’t really know what “pacing” means, he hasn’t gone to decision since 2007.

Vitor Belfort is a polarizing figure. Well, the people on the negative side of that pole will be very happy this weekend. Yes, Belfort has explosive techniques that can strike at any moment, but Weidman’s command of range and distance will nullify the Brazilian’s explosiveness. Beflort doesn’t necessarily have a high output, so Weidman will capitalize on the lulls in action to attempt takedowns. The Phenom hasn’t had to use his cardio in a number of years, but the shallowness of his gas tank will be on full display. Weidman by decision.

Time for the main event! Currently riding a nine fight win streak (six by KO) Anthony “Rumble” Johnson is one of the hardest hitters in any division. While his opponent’s wrestling may be more highly touted, Rumble still defends takedowns at an 85% rate and has neutralized grapplers many times throughout the course of his career. An Olympic wrestler, Daniel Cormier gets another shot at gold after suffering the first loss of his career to Jon Jones. A volume striker, he excels at clinch work and dirty boxing.

Daniel Cormier is an excellent fighter; that can’t be debated. What can be debated, however, are his chances in the light heavyweight division. Many of the relative advantages he had against heavyweights (speed, pacing, cardio) have been nullified at light heavyweight. His wins have been over a green Patrick Cummins and a Dan Henderson in the twilight of his career. Cormier will struggle with Johnson’s power and have a hard time finishing takedowns. As long as Johnson doesn’t gas himself out looking for the finish, he take the unanimous decision.

That wraps up another emotionally charged edition of the Downes Side! Follow me on Twitter @dannyboydownes. Also, don’t forget to leave your own predictions, syllogisms, red herrings and favorite emo band that could double as the title of a UFC event on the page here. I’ve been pitching Panic! At the Disco for years.