The Downes Side: UFC 186 Predictions 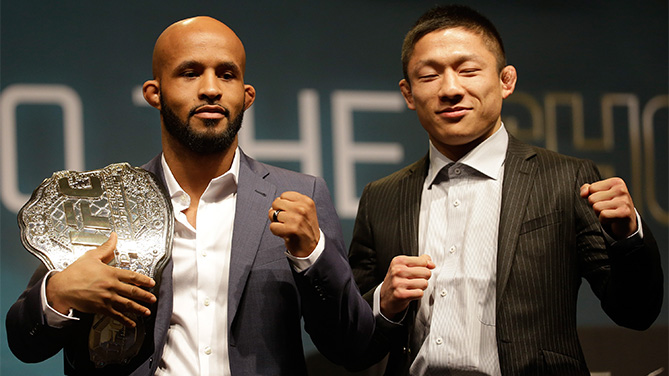 Cover your starches with gravy boys and girls, it’s time for another French-Canadian version of the Downes Side! Find a comfortable place to lay down, because these predictions are going hit you harder than a serving of poutine and a six pack of Molson.

If you’re looking for action that can match that calorie count, you’ve come to the right place. UFC 186 comes to you live from Bell Centre in Montreal, Quebec, Canada. In the main event of the evening, flyweight champion Demetrious “Mighty Mouse” Johnson defends his belt against Japanese powerhouse Kyoji Horiguchi. In the co-main event, Quinton “Rampage” Jackson returns to the UFC to take on Fabio Maldonado. It’s fight time.

We begin the main card in the bantamweight division for Yves Jabouin and Thomas Almeida. Stepping into the Octagon for the ninth time, Tristar-trained Yves “Tiger” Jabouin has traded wins and losses in his last four fights. The 35-year-old will have his hands full against rising prospect Thomas Almeida. A dangerous striker, 13 of his career wins have come via KO.

Jabouin has rounded out his abilities, but he’s still primarily a kickboxer. His takedowns aren’t particularly strong, and Almeida has proven he has capable defense. The difference maker here is output. Almeida strings together combinations, and has the far superior volume. Jabouin will crowd Almeida early and maybe even hold him against the fence. Just like his fight against Gorman, though, the young Brazilian eventually finds his range, and lets the punches and kicks fly. Almeida by decision.

Next we move to lightweight for some Canadian on Canadian violence between John Makdessi and Shane Campbell. Another Tristar product, Makdessi’s three-fight win streak came to a halt after dropping a decision to Alan Patrick at UFC 169. A Muay Thai striker, Campbell makes his UFC debut after finishing his last three opponents by TKO.

The prediction game is a lot like a Downes family Christmas -- emotions only get in the way (or ruin things, I forget). That being said, there’s no way I can pick against Campbell. I mean, he shot a Hadouken at his last opponent! This time I hope he busts out a Metsu Shoryuken. Regardless, Campbell should have the edge tactically. Makdessi may be the “Bull,” but he’ll struggle to get inside Campbell’s range. Even if he does close distance, Campbell’s clinch game should provide the necessary counter. We may not see a Tatsumaki, but we’ll see Campbell win by unanimous decision.

That brings us to the middleweight division for Michael Bisping and CB Dollaway. Number 10 in the rankings, but number one in our hearts, “The Count” attempts to bounce back after a submission loss to Luke Rockhold. Dollaway could use some momentum, too. After back-to-back wins over Cezar Ferreira and Francis Carmont, Lyoto Machida only needed a minute to put him away in December.

There’s a tendency to overreact when a fighter loses. Especially after Bisping’s loss to Tim Kennedy last year, people seem to have forgotten how good his takedown defense has been. Yes, Dollaway may win a wrestling match between the two, but wrestling in MMA is completely different. For his career, Dollaway has only converted 54.72% of his takedowns. He may get Bisping down briefly, but don’t expect him to hold the Englishman down. Bisping boxes his way to the decision win.

Let’s shift to light heavyweight for Fabio Maldonado and Quinton “Rampage” Jackson. Lovingly known as the “Iron Hillbilly,” Fabio Maldonado has won four of his last five fights. Most recently, he defeated 90s action movie bad guy Hans Stringer by TKO. Known to us as “Rampage,” Quinton holds 18 career knockouts and five submissions (I know, I couldn’t believe that number either).

Maldonado and Rampage are perfect opponents for one another. They’ll stand in each other’s faces, throw leather and neither will even consider a takedown. Both fighters may look forward to this opportunity, but this type of fight benefits Rampage far more. Maldonado may have an iron chin, but Jackson still has KO power. Rampage may not threaten for the belt any time soon, but he’ll punctuate his UFC return with a second round TKO.

Time for the main event! The greatest (and only) flyweight champion in UFC history, Demetrious “Mighty Mouse” Johnson defends his title for the sixth time. One of the most technically sound fighters in MMA, Johnson blends striking and wrestling seamlessly. Holding a 4-0 record inside the UFC, 24-year-old Kyoji Horiguchi can go from unknown to world champion.

The Nostradamus of MMA is no stranger to fearless predictions. There is a difference, though, between fearlessness and foolishness. The time I said that Joey would be a hit sitcom -- fearless. Picking Horiguchi -- that’s foolish. Horiguchi does have a lot of potential and power, but he still needs time to develop. Johnson has too many weapons, and his speed will be too much. Johnson has shown defensive lapses in the past, but Horiguchi will never have the chance to make it count. Johnson by second round rear-naked choke.

That wraps up another provincial edition of the Downes Side. Follow me on Twitter @dannyboydownes. Also, don’t forget to leave your own predictions, insecurities and humble-brags on the page here.