The Downes Side: UFC 177 Predictions 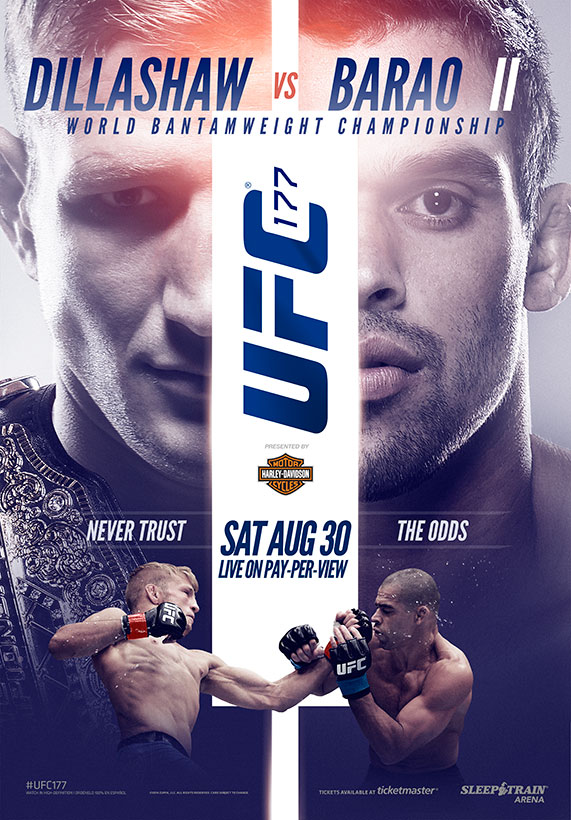 That’s right boys and girls, we’re heading to Sacramento for another edition of the Downes Side! Unfortunately, I’m stuck in Sacramento, Kentucky instead of California. The Civil War reenactment was a lot of fun, but I probably won’t make it to the event.

While I enjoy the sights and sounds of McLean County, the world’s best MMA fighters roll into the Sleep Train Arena for UFC 177. In the main event of the night, T.J. Dillashaw will defend his bantamweight title for the first time against the man he took it from just over three months ago. In the co-main event of the night, Danny Castillo and Tony Ferguson battle to set themselves apart in the crowded lightweight division.

The main card starts in the lightweight division for Yancy Medeiros and Damon Jackson. Winless in three Octagon appearances, Medeiros has shown flashes of brilliance in his short career. An explosive and aggressive fighter, his tendency to push the pace leaves him open to counter attacks. Stepping in for an injured Justin Edwards, Damon “The Leech” Jackson lives up to his nickname with a strong submission game and clinch attack.

Medeiros needs to stuff the takedowns. Jackson’s wrestling game matches his jiu-jitsu skills, but he’s still pretty raw on the feet. Medeiros should be able to capitalize with his power strikes, but he’s a lot like a Chinese food buffet -- it can be incredible or terrible. Either way, someone is going home hurting. Despite his inconsistency, Medeiros’ power and speed advantage will be too much for Jackson to overcome. Medeiros by second round TKO.

We stay with the 155-pound fighters for Ramsey Nijem and Diego Ferreira. Runner-up on season 13 of The Ultimate Fighter, a regenerated Nijem tries to run his win streak to three after back-to-back wins over Justin Edwards and Beneil Dariush. Known for his wrestling and top control, Nijem showcased his power with a first-round TKO in April. A slick jiu-jitsu artist with six submissions to his credit, Ferreira burst on to the UFC radar with a 38-second submission over Colton Smith in June.

Nijem has incredible cardio, but struggles in the early frames of a fight (three of his four career losses have come in the first round). There are questions surrounding Nijem’s chin, but Ferreira has never really shown the ability to hurt opponents with his hands. It’s certainly possible that the Brazilian cinches a rear naked choke, but the more likely outcome is Nijem by decision.

Next, we shift to the women’s bantamweight division. Looking to take out the second member of the Four Horsewomen, Bethe Correia’s two UFC appearances against Julie Kedzie and Jessamyn Duke have catapulted her into the top ten. An 11-year veteran of the WMMA game, Shayna “Queen of Spades” Baszler makes her first official UFC appearance after a stint on TUF 18.

If this were sparring in the gym, the Queen of Spades wins it. This is a fight, though. Correia may not have as many tools as Shayna Baszler, but how many do you really need? I fix 90% of the things around my house with a hammer and duct tape. In this case, Correia has her hands and clinching (you decide which one’s which). The Pitbull’s tenacity and physical advantage push her to the unanimous decision. What do I do about the other 10%? It doesn’t matter.

We return to lightweight for Tony Ferguson and Danny Castillo. Winner of season 13 of The Ultimate Fighter, “El Cucuy” Ferguson has finished his last two opponents in the first round. A Division II national champion wrestler, he also has nine knockouts to his credit. A Team Alpha Male product fighting out of his own backyard (not literally...I think), “Last Call” Castillo bounced back from a close majority decision loss to Edson Barboza with a second-round knockout over Charlie Brenneman at UFC 172.

In his WEC and early UFC days, Castillo looked like a wrestler who tried to strike. If you watch his last few fights, however, you can see how much his boxing has evolved. He doesn’t overwhelm opponents with numbers, but he has enough power in his hands and his counter striking has improved, too. Ferguson does well when he can move forward and dictate the engagements, but Castillo won’t give him that opportunity. He might not convert many takedowns, but Last Call takes the decision.

Time for the main event! After shocking the world in their first meeting, T.J. Dillashaw can prove it wasn’t a fluke with a win here. A gifted wrestler, Dillashaw actually picked Barao apart with his hands back in May. His constant footwork and stance changes confused Barao, and the Brazilian just couldn’t read his timing. Even though he no longer has the belt, many people have been quick to forget what propelled Barao to a 35-fight unbeaten streak.

I picked Dillashaw in the first fight, and I’m sticking with him here. Barao has beaten plenty of athletes in his tenure, but never someone with Dillashaw’s movement. Leg kicks are effective against static opponents that will stand in front of you. Dillashaw never afforded Barao those opportunities, and “The Baron” just couldn’t seem to recover. Barao is still one of the best fighters in the world; Dillashaw is just a bad matchup for him. The gameplan may not be a surprise this time around, but he’ll implement it the same way and defend his title with a unanimous decision win.

That wraps up another geographically confused edition of the Downes Side. Follow me on Twitter @dannyboydownes. Also, don’t forget to leave your own comments, opinions, muses, interrogatives and favorite tourist destinations on the page here. I’ve always been a fan of Stuttgart, Arkansas.