The Downes Side: UFC 175 Predictions 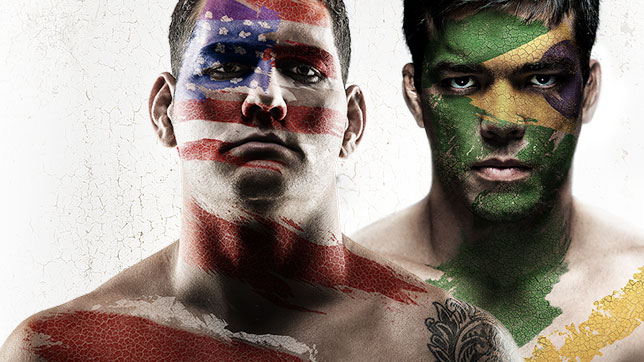 That’s right boys and girls, Tom Cruise was born on the Fourth of July, and so was the Downes Side! [Editor’s note: neither one of those facts are true]. Even if you aren’t a citizen of the United States of America, strap yourself in for the only MMA predictions column that combines the leadership of George Washington, the ruggedness of Davy Crockett and the masculinity of Christian Bale. Who could be more American than Batman?

Even the caped crusader himself would have a hard time analyzing the incredible night of fights planned for UFC 175. Live from the Mandalay Bay Events Center in patriotic Las Vegas, Nevada, the main event of the evening will determine the middleweight championship as Chris Weidman defends the belt for the second time against Lyoto “The Dragon” Machida. In the co-main event of the night, women’s bantamweight champion Ronda Rousey looks to continue her unbeaten streak against Alexis Davis.

We open up in the featherweight division with Marcus Brimage and Russell Doane. A veteran of TUF 14, Brimage suffered the first loss of his UFC career when Conor McGregor KOd him in the first round last April. Primarily a striker, the “Bama Beast” prefers to wear down opponents with his pace and aggression. A Hawaiian fighter who trains with UFC fighters like Max Holloway and Louis Smolka, Doane has six career wins via KO and five via submission.

Both of these fighters like to keep the fight on the feet. Brimage has a 100% takedown rating, but that’s like saying I have a 100% successful marriage rate. Each of us have only tried it once, so let’s see how it works. This fight will look like a kickboxing match, and since that’s the case, I have to give the edge to Doane. Brimage is a much more capable striker than how he looked against McGregor, but his fight against Jimy Hettes is much more telling. He’s prone to standing flat-footed and retreats when faced with an attack. Doane has a much more active attack and will slip and counter Brimage’s punches. As long as he can maintain his cardio, Doane takes the unanimous decision.

We move to middleweight for Uriah Hall and Thiago Santos. The breakout star of TUF 17, Uriah Hall struggled in his first two UFC fights. After dropping two split decisions to Kelvin Gastelum and John Howard, he bounced back with a TKO over Chris Leben last December. Nicknamed “Primetime,” Hall has impressive striking techniques, but can be susceptible to takedowns. After losing his UFC debut to Cezar Ferreira, Santos responded with a first round TKO over Ronny Markes in March.

It’s difficult to determine Santos’s true skill level. His fight against Ferreira lasted 47 seconds and his win over Markes was only 53 seconds. If my mathematical prowess is as strong as I think it is, that means he’s only been in the Octagon for 100 seconds. Hall has a lot of talent, but he hasn’t lived up to it. His greatest weakness has been his tendency to coast and not attack. There’s always a chance that Santos blitzes Hall and overwhelms him, but “Primetime” just has too much ability to fall victim to that. I’ve picked against Hall in the past (and been right), but this time he wins by second round TKO.

We bump up to heavyweight for Stefan Struve and Matt Mitrione. After overcoming a severe heart condition, Stefan Struve steps back into the Octagon for the first time since his third round knockout loss to Mark Hunt in March 2013. A hard swinging southpaw whose first professional fight was the TUF 10 finale, Mitrione can prove that he still belongs among the upper echelon of heavyweight fighters with a win here.

Much like how meatheads aren’t necessarily known for their progressive beliefs, Meathead Mitrione hasn’t progressed much in his UFC career. His power still commands respect, but he hasn’t shown many other threats. A functional aorta may help Struve’s conditioning, but it won’t help his tactics. Despite his 7-foot frame, he still doesn’t use it to its maximum potential. Having said that, Struve has faced heavy hitters in the past, and he’s still found ways to defeat them. He may not win a kickboxing match against Mitrione, but he’ll get the fight to the ground and win by first-round triangle choke.

That brings us to the first title fight of the night. She may not win any popularity contests, but Ronda Rousey has won every single MMA fight of her career. Even the quickest championship turnaround in UFC history didn’t stop her from beating Sara McMann in the first round at UFC 170. After studying a lot of film, I’ve come to the conclusion that she has an excellent armbar submission. In fact, eight of her career wins have come that way. With a 3-0 record inside the UFC, Davis is a jiu-jitsu black belt with her eyes on the upset.

The battle inside the clinch will determine this fight. Every single one of Rousey’s takedowns has come from there, and Davis likes to attack from the clinch herself. Even on the ground, you have to wonder about Rousey’s effectiveness. Not only has Davis never been submitted, she’s also been able to shut down opponents so thoroughly that a submission has never been attempted against her. Much like Harlem Shake videos or old people using the word “twerk,” this too shall pass. Davis survives the first, but Rousey wins with her armbar in the second.

Time for the main event! Regardless of how you feel about Chris Weidman’s two wins over Anderson Silva, you can’t deny that the man is the reigning middleweight champion. He can put all doubters to rest with a win over #1 contender Lyoto Mcahida. Since dropping to middleweight, Machida has shown off the skills that made him light heavyweight champion. High takedown defense plus brilliant counters striking makes Machida the most dangerous dragon since puff (don’t do drugs or buy Peter, Paul and Mary CDs kids).

Everyone knows about Chris Weidman’s wrestling, but they fail to recognize that he’s outstruck every single opponent that he’s faced. That streak will continue, but that’s only part of the story. Machida may be outstruck in pure numbers, but his counter shots with be more effective. Weidman avoids damage by taking opponents down, but has vulnerabilities on his feet. Machida will exploit these openings and his left hand will dictate the engagements. Lyoto Machida becomes your new middleweight champion with a decision victory.

That wraps up another Yankee Doodle Dandy-approved edition of the Downes Side. Follow me on Twitter @dannyboydownes. Also, don’t forget to leave your own predictions, compliments, thoughts, adulations or plans for the weekend on the page here. The best ones might gain the privilege of my presence.