The Downes Side: UFC 172 Predictions 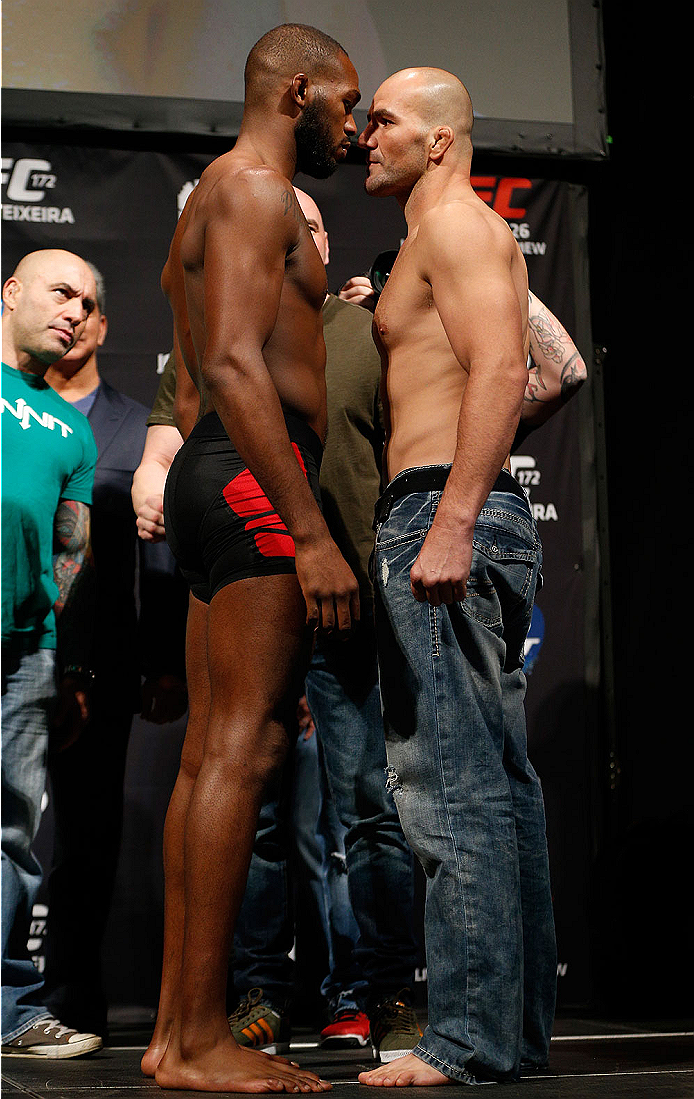 April showers bring May flowers, but they also bring another edition of the Downes Side!    Coincidentally, I’ve had many readers tell me that the Nostradamus of MMA often gives them sunshine on a cloudy day. Others though, accuse my articles of being a ball of confusion, and that I let my imagination run away with me.

No matter how you feel, I suggest that everyone give into temptation and order UFC 172. Live from Baltimore Arena in (you guessed it) Baltimore, Maryland, this night of fights will bring some order to the top-heavy light heavyweight division. Reigning champion Jon Jones will defend his title for the seventh time after the most challenging fight of his career. The challenger, Glover Teixeira, looks to increase his win streak to 21 and bring the belt back to Brazil. In the co-main event of the evening, Phil Davis can continue to make his case for the #1 contender spot with a win over Anthony “Rumble” Johnson.

The main card begins in the featherweight division with Max “Blessed” Holloway and Andre Fili. After two straight losses to Dennis Bermudez and Conor McGregor, Holloway bounced back with a 2nd round TKO over Will Chope in January. A rangy fighter that throws a lot of numbers, Holloway keeps a constant pace that overwhelms opponents. After being denied the opportunity to fight Nick “The Promise” Ring for pun nickname supremacy, Andre “Touchy” Fili takes a big jump up in competition. After making his UFC debut on short notice back in October, the Team Alpha Male product punished Jeremy Larsen en route to a second round TKO of his own.

Fili was lucky to finish Larsen in the second round because he gassed himself out going for the finish in the first. His aggression often bordered on recklessness, and left a lot of holes for counter attack. Then again, he took that fight on short notice so it’s hard to really gauge his skill level. Holloway has technical striking, but he’s a volume puncher. Fili’s pressure will prevent him from stringing together long combinations, and could even put Holloway on his back. The young Hawaiian has excellent defensive jiu-jitsu, but won’t pose much of a threat on his back. Even if Fili does tire out, he’ll do enough to keep Holloway on his heels and pick up a touchy unanimous decision.

We move to lightweight for Jim Miller and Yancy Medeiros. Fresh off a first round armbar of Fabricio Camoes at UFC 168, Jim Miller tries to work his way up the 155-pound rankings again. A respectable boxer, he uses his hands as a means to secure the takedown rather than searching for the knockout. Stepping in for an injured Bobby Green, Yancy Medeiros searches for his first official win in the UFC. An aggressive fighter who always comes forward, only one of his eleven career fights have gone the distance.

Despite only spending 5:19 inside the Octagon, Medeiros has shown promise. He has a lot of power in his hands, but he needs to be better about when to go for broke. In his fight against Yves Edwards, his lunging shots caused him to get caught with a number of counter hooks. Against Jim Miller, that same tendency leaves him vulnerable to the takedown. Medeiros tags Miller early, but it will only be a matter of time before he gives up the takedown. From there, Miller will do what he does best. After grinding Medeiros down, he finishes with a rear naked choke in the second.

We then shift to the middleweight division for Luke Rockhold and Tim Boetsch. A former Strikeforce champion, Rockhold holds the record for the most finishes in the organization’s history. His UFC debut made highlight reels for the wrong reasons when Vitor Belfort knocked him out with a vicious spinning heel kick. In his second UFC fight, he answered back with a first round KO of his own against Costas Philippou. Tim Boetsch found initial success when he moved down to middleweight, but he’s struggled in his last three fights. An accurate striker who’s been attempting a lot more takedowns as of late, he’s most comfortable fighting on the inside.

Boetsch may want to initiate the clinch, but he’ll have a difficult time reaching his opponent. Rockhold has fast kicks, and can change his attack levels very easily. “The Barbarian” won’t lose as drastically as the last Conan movie, but his arms will be too busy defending kicks to throw power shots. After softening him up on the outside, Rockhold catches Boetsch with a head quick and ground and pounds his way to a second round TKO.

That brings us to the co-main event between Phil Davis and Anthony Johnson. Everyone knows about Phil Davis’ wrestling game, but they ignore his striking defense. “Mr. Wonderful” actually absorbs the fewest strikes per minute of anyone in the entire division. He used that ability, plus some well-timed takedowns, to take a controversial split decision win over Lyoto Machida. Striking defense will be even more important against Anthony “Rumble” Johnson. Returning to the UFC for the first time since January 2012, it doesn’t matter what weight class he fights in -- he hits hard.

Much like the Machida fight, expect Davis to stay outside and not engage. That strategy worked against “The Dragon,” but I’m not sure how effective it will be this time around. Machida is a counter puncher that uses opponent’s attacks against themselves. Johnson crushes opponents with brute force. If I were to draw a movie analogy, Machida would be Rumble in the Bronx while Johnson embodies Ready to Rumble. You don’t want to be hit by either, but they take a different set of skills to avoid. Johnson’s been known to fatigue, so conditioning will be a big factor. If he gets tired, there’s no way he’ll be able to stuff Davis’s takedowns. Despite those concerns, Johnson wins with a second round TKO.

Time for the main event! After an incredible fight against Alexander Gustafsson that pushed Jon Jones to the limit, many are ready to usher out the current light heavyweight champion. A true mixed martial artist with few holes in his game, “Bones” attacks with a wide repertoire of kicks, knees and elbows. Glover Teixeira brings a ton of offensive power to the fight too. Not only have his heavy hands led him to 14 career KOs, but his significant strikes land at a higher rate than any other fighter in the organization.

In this business, you’re only as good as your last fight. Jon Jones looked vulnerable in his last fight, so the aura of invincibility has been stripped away. Well, I’m here to tell you that the emperor does in fact have new clothes (not here, but you get my point). Teixeira lands a lot of strikes, but he also absorbs a lot.  His last fight against Ryan Bader is a perfect indicator of that. He finished the fight with a big punch, but he won’t have the opportunity here. Gustafsson gave Jones trouble because of his range and speed. Teixeira’s style relies more on big, single shots. Jones’s reach advantage wears down Glvoer. Then, once they reach the later rounds, the champ pours it on, takes Texeira down and locks up a guillotine in the fourth round to retain his belt.

That wraps up another masterpiece edition of the Downes Side. Follow me on Twitter @dannyboydownes. Also, don’t forget to leave your own predictions, thoughts, adulations and favorite flower name on the page here. Anyone else a fan of the Bat Face Cuphea?