The Downes Side: UFC 169 Predictions 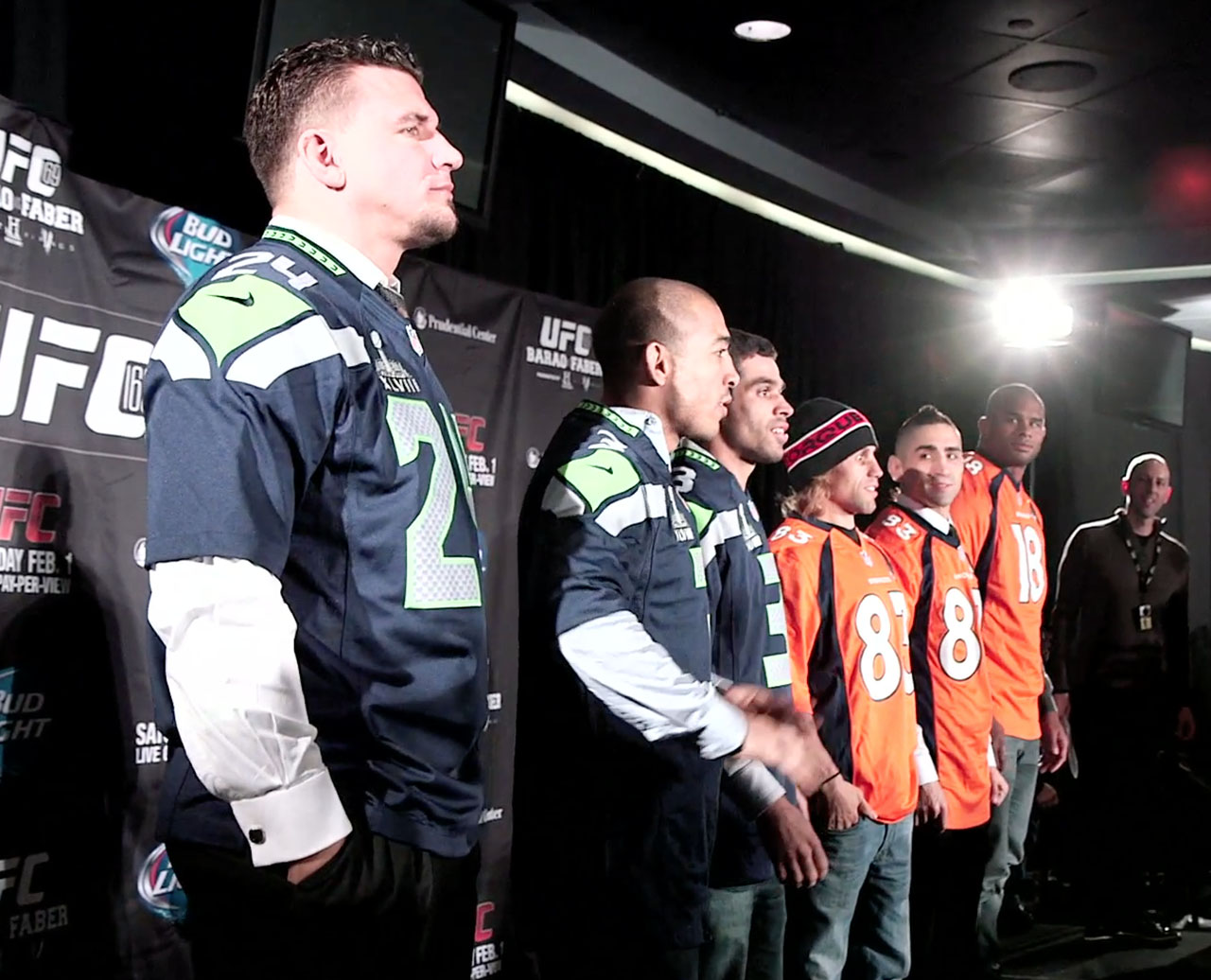 That’s right boys and girls, it’s time for another super edition of the Downes Side! Apparently there’s some large American Football match this weekend, but I can’t be bothered with such trivialities. I have to sort through my Mumford and Sons vinyls and get my MacBook checked out.

If you’re looking for a totally nonconformist athletic endeavor this weekend, look no further than UFC 169. Live from the Prudential Center in Newark, New Jersey, it promises more fun than reading Jack Kerouac at the farmers market. The main event of the night will decide the undisputed bantamweight championship as Renan Barao defends his title against Urijah “The California Kid” Faber. The co-main event doubles up the championship fun, as Jose Aldo defends his belt for the sixth time against Ricardo “The Bully” Lamas. So trim up your mustache and grind your organic coffee beans, it’s time to get down to business.

The main card opens up in the lightweight division with Jamie Varner and Abel  “Killa” Trujillo. As the doors closed on the WEC, the same thing happened to Varner’s career. After a brief retirement and some success outside the Zuffa banner, he made an immediate impact in his UFC return with a shocking upset over Edson Barboza at UFC 146. Since that high point, he’s dropped two of his last three and finds his back right back against the wall. After a controversial no contest against Roger Bowling in August, Abel Trujillo left no doubt with a brutal TKO in their rematch four months later. The hard hitting Team Blackzilians member throws everything with bad intentions and has finished opponents in 7 of his 11 wins.

Jamie Varner may not have the same grappling prowess as Khabib Nurmagomedov, but he’ll treat Trujillo the same way. Trujillo has a lot of power in his hands, but he throws his punches so hard that he falls out of his stance. This will make it easy for Varner to grab a waistlock, push Trujillo against the fence and finish the takedown. Trujillo will be able to get back to his feet, but he won’t be able to stop the repeated takedowns. Varner drags and tosses his way to a unanimous decision victory.

We move down to flyweight for John Lineker and Ali Bagautinov. Living up to his “Hands of Stone” nickname, three of Lineker’s four straight wins have come via TKO. After missing weight on three separate occasions (and nearly a fourth yesterday), the only struggles he’s had lately are with the scale. Usually a couple extra pounds only earns you a few insults from your relatives during the holidays (family time is so precious), but this time it’s cost him title contention. Neither scales nor opponents have bothered Ali Bagautinov lately. The Russian holds a ten fight unbeaten streak, including two wins in the UFC. Nicknamed “Puncher,” this Sambo champion is much more than a boxer.

Next to John Dodson, Lineker has the most dangerous hands in the division. His offensive striking capabilities are impressive, but he lacks the defensive skills to match. Bagautinov utilizes his superior movement and guard to avoid Lineker’s big punches and eventually brings the fight to the mat. From there, he’ll advance position, lock in a rear naked choke and secure the tap out in the second round.

We jump from the lowest weight division to the highest as heavyweights Frank Mir and Alistair Overeem try to end their current losing streaks. Former UFC champion and possible bad guy in every Revenge of the Nerds movie, Frank Mir has dropped three in a row to Junior Dos Santos, Daniel Cormier and Josh Barnett. Always a threat on the ground, he has steadily improved his boxing to round out his skills. Former Strikeforce heavyweight champion and possible bad guy in every (Dutch spinoff) Revenge of the Nerds movie, Alistair Overeem has lost his last two fights against Antonio “Bigfoot” Silva and Travis Browne.

I know Frank Mir told himself it was going to be a great year, but it’s not going to start out that way. He struggles against athletically superior heavyweights, and that streak continues. Overeem will not only beat him to the punch, but he’ll fend off any takedown attempts. Mir will get on the inside, but he’ll find himself stuck inside Overeem’s clinch.  As long as hubris doesn’t get the better of him like it did during the Silva fight, The Reem batters Mir with knees and takes the first round knockout. Looks like it’ll be time for Mir to start working on his new lines.

That brings us to the first title fight of the night. The first and only featherweight champion in UFC history, Jose Aldo’s explosive, aggressive striking has given him the records for most wins and knockouts in featherweight history. Another fighter undefeated during his UFC tenure, Ricardo “The Bully” Lamas lived up to his nickname with some brutal ground and pound in his TKO win over Erik Koch last January. Capable on the feet, he uses his wrestling and top position skills to earn the majority of his victories.

Jose Aldo has yet to dispel the criticism that he fades as fights progress. He may have finished Chan Sung Jung late in their fight, but a lot of that could be accredited to a timely shoulder injury. We can play “What if?” all day (as long as it’s not the Kevin Sorbo movie), but the fact of the matter is that Jose Aldo remains champion and he’s beaten high level wrestlers before.  Ricardo Lamas may be a worthy challenger, but he doesn’t offer anything that Aldo hasn’t already faced. Lamas finds success when he can keep opponents on their heels retreating. Aldo won’t back himself into the fence like Koch and others, and that will prevent Lamas from working his ground and pound. Aldo low kicks and strikes his way to a unanimous decision win.

Time for the main event! Referred to by some as “A MONSTER!” Renan Barao has been running through elite 135-pound fighters without a care in the world. Not only did he drop Eddie Wineland in September with a spinning back kick, he even showed off his dancing skills. Arguably in the best form of his career, Urijah Faber fought just six weeks ago, submitting Michael McDonald via guillotine in the second. Unsuccessful in his last few title shots, Faber could find himself in bantamweight limbo with a loss here. And no, that’s not a fun party game they do at UFC Christmas parties.

As human beings, there are some things we do that defy logic. We fall in love. We create art. We make Nickelback one of the best-selling rock groups of all-time. Am I comparing all those things to picking Urijah Faber to win? You bet I am. Faber’s come up short in his last few title shots because of an inability to close the gap and mount a prolonged offensive attack. Now that he has a better reading of Barao’s speed, he solves this problem. People think that a short notice fight only harms the challenger. Switching from Dominick Cruz to Faber will affect Barao’s timing and allows Faber to connect with his right hand and finish takedowns. The California Bridesmaid becomes the bride and captures the bantamweight championship by unanimous decision.

That wraps up another totally not mainstream edition on the Downes Side. Follow me on Twitter @dannyboydownes. Also, don’t forget to leave your own questions, predictions, falsehoods and tips on how to be counter cultural on the page here. I’ll go with anything this guy does.