The Downes Side: UFC 165 Predictions 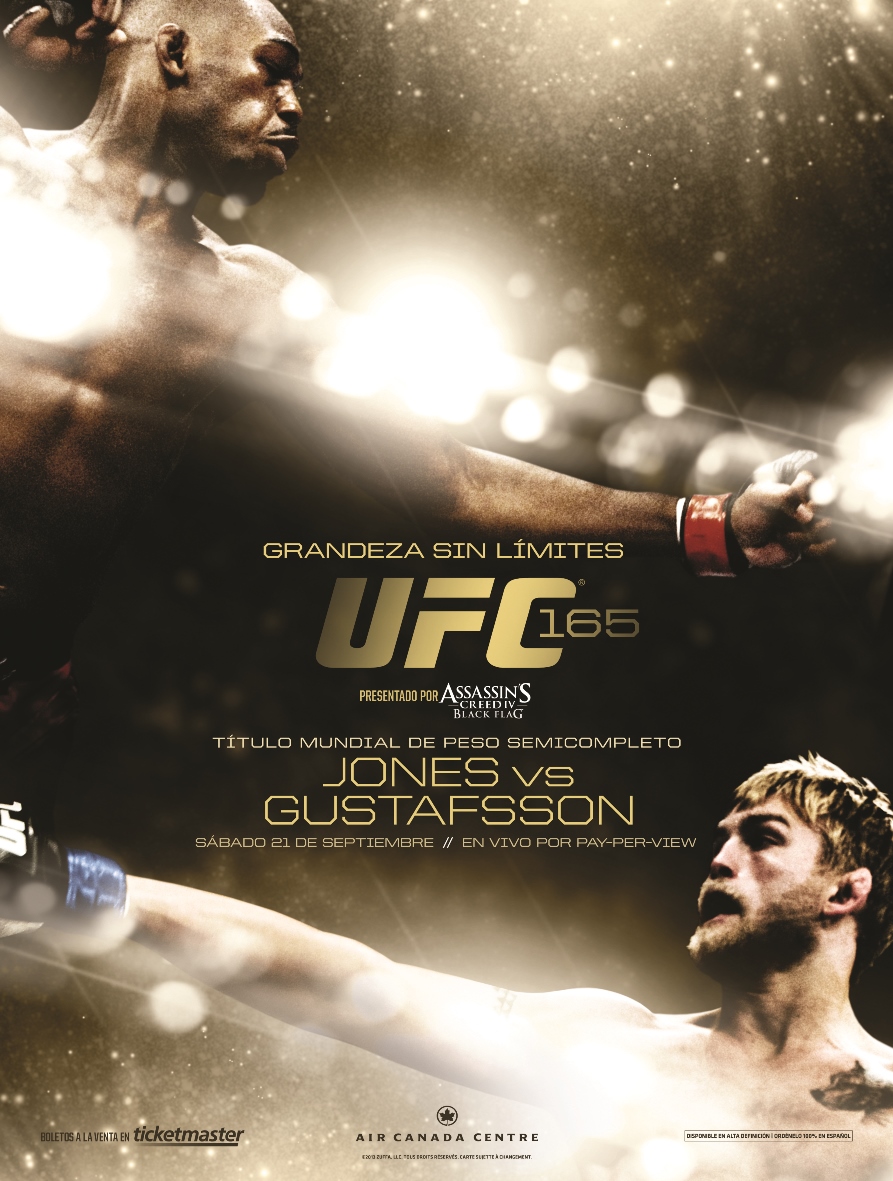 That’s right boys and girls, it’s time for another Canadian edition of the Downes Side! North America’s favorite constitutional monarchy has housed many incredible UFC events, but this one takes place in a place that the kids call, “T-dot.” Not only does its fight scene eclipse that of the Tennessee Department of Transportation, but it also features the the Bata Shoe Museum.

Whether you’re sneaker devotee or prefer a classy French chestnut crushing clog (so much more useful than Doc Martens), UFC 165 has something for everyone as it rolls into the Air Canada Centre this weekend. In the main event, light heavyweight champion Jon Jones attempts to seize another record as he makes his sixth title defense. Looking to prevent that record from breaking will be another young 205-lb wrecking house in Alexander “The Mauler” Gustafsson. The co-main features another title bout as Renan Barao puts the interim bantamweight belt on the line against against longtime WEC/UFC mainstay Eddie Wineland. 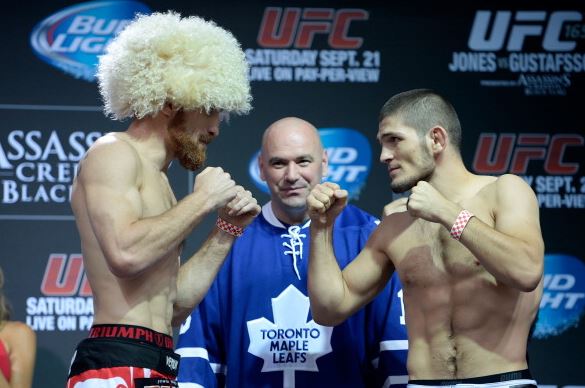 The main card kicks off in the lightweight division with a veteran trying to knock off a rising star as Pat Healy and Khabib Nurmagomedov square off. With 47 career fights, Healy has knocked off many touted prospects in his day with his punishing top position and submission skills. A Sambo world champion, the undefeated Nurmagomedov steps inside the Octagon for the 5th time after taking Abel Trujillo down 21 times en route to a unanimous decision victory at UFC 160.

Neither one of these fighters are incredible strikers. They use their punches as a means to get the fight to the ground and it’s served them both well so far. Nurmagomedov dominated Trujillo, but the problem with taking someone down 21 times is that it means you let them stand up 20 times. Healy has the ability and durability to grind out a victory, but if there’s one thing that Napolean taught us (besides the dangers of short man complex), it’s that you should never enter a war of attrition with a Russian. The Eagle won’t be able to keep Healy on the ground, but he’ll get enough takedowns and press forward to take the unanimous decision. 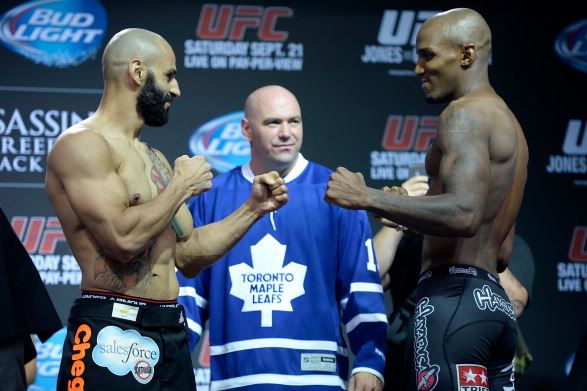 We bump up to middleweight for two under-the-radar fighters riding five-fight win streaks inside the UFC as Costa Philippou and Francis “Limitless” Carmont look for a breakout win in the division. Fighting for the first time since a 3rd-round TKO over Tim Boetsch in December, Philippou possesses technical boxing and the best takedown defense rating (88.9%) in the division. After career filled with ups and downs, Carmont’s career changed once he started training at the world renowned Tristar gym and he hasn’t lost a fight in over five years. He also holds the second highest takedown defense rating (85.7%) behind Philippou.

Carmont didn’t earn any new fans with his win over Lorenz Larkin in April. You could argue that he shouldn’t have received the nod from the judges, but it did show two things: 1) Carmont’s punch defense is solid and 2) he’s relentless with takedown attempts. Philippou’s biggest question mark has been his affinity for fading as the fight progresses. Sure, he beat Boetsch in the third, but the MMA Holy Trinity had played a large part. (That’s an eye poke, head butt and broken hand for those of you wondering.) Carmont’s defense is strong enough to avoid the first-round onslaught. After that, his ability to push forward and pursue the takedown earns Carmont the biggest win of his career and a potential top-10 matchup next time. 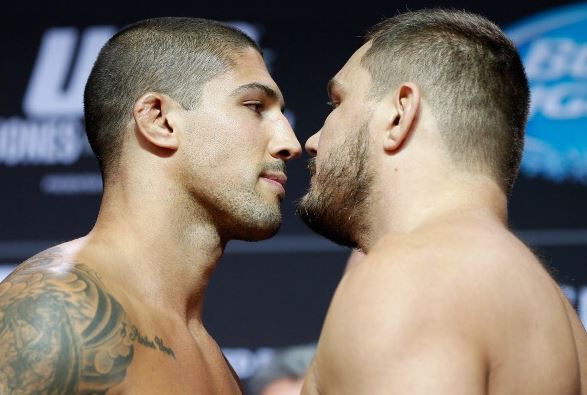 The next fight pits two castmates of The Ultimate Fighter: Season Ten as heavyweights Brendan Schaub and Matt Mitrione place their friendship aside. After two first-round KO losses to Ben Rothwell and Minotauro Nogueira, Schaub bounced back with a decision win over Lavar Johnson at UFC 157. Matt Mitrione also found some momentum after losing two in a row by taking out Phil de Fries in 19 seconds in April.

I never thought we’d hear the word “frenemy” be used in an MMA context, but it should come as no surprise that it’s in the heavyweight division. Those big guys are just so sensitive (just look at Roy Nelson’s emotional eating problems). Schaub moved out to the LA area to train at the Reign Training Center with the likes of Chael Sonnen and Mark Munoz and showed those improved wrestling skills against Lavar Johnson. He may be more well-rounded than Mitrione, but there are questions surrounding his chin. Mitrione has repeatedly shown that he has the power to finish people with his left hand and that happens again here. He’ll defend the takedowns and drop Schaub in the first. They’ll hug and make up afterwards, but they’ll start sniping at each other again once Schaub criticizes Matt’s car interior. 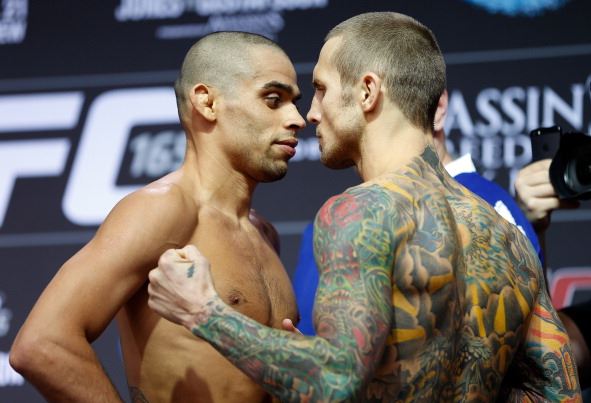 That brings us to the co-main event of the night. It may be for an interim title, but the entertainment will be undisputed as current champ Renan Barao tries to continue his 30+ fight unbeaten streak. After dispatching of the likes of Michael McDonald, Brad Pickett, Scott Jorgensen and Urijah Faber, Barao will look to cement his place on top of the division with a win over Wineland. A former WEC bantamweight champion, Wineland has the heaviest hands in the division.

No one can deny Wineland’s power. Even his jab has caused many elite bantamweights to recoil. If there’s a weakness in his striking, though, it’s the fact that he wastes a lot of shots. His inaccuracy will cost him dearly against someone with Barao’s speed. Wineland looks incredible against opponents who stand directly in front of him. Renan Barao is not one of those fighters. Barao’s speed and low kicks will wear down Wineland and as the fight enters the later rounds, the champ will score a takedown and start attacking from the top. This will open up another opportunistic submission like against McDonald and Barao retains the belt with a 4th round RNC. 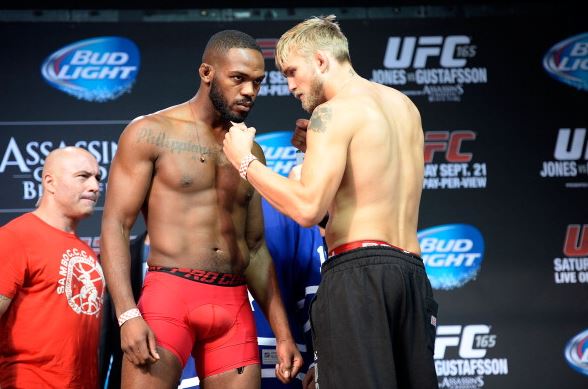 Time for the main event! At only 26 years old, Jon Jones already has people talking about his legacy and potential to be the greatest MMA fighter of all time with dominant wins in all of his performances. The greatest Swedish fighter since Dolph Lundgren, Alexander Gustafsson’s high striking rate and boxing would make even Drago envious.

Leading up the the fight, much has been made about how the two fighters have similar measurements. Height and reach may be quantifiable, but Jon Jones’s abilities are not. He’s outstruck Shogun Rua, outwrestled Chael Sonnen and even did this to Bruce Buffer. Gustafsson relies on extended combos and volume striking, but often leaves himself open to counters. Jones will spend the first round reading his Gustafsson’s movements and timing him. Then, in the second round he’ll strike and drop The Mauler with a right hand and earn the TKO. On the bright side, Gustafsson has a victory over Matt Hamill the only man to ever beat Jon Jones (technicalities count!), so at least he has that.

That wraps up another maple leaf approved edition of the Downes Side. Follow me on Twitter  @dannyboydownes to let me know how brilliant you thought these predictions were. Also, don’t forget to leave your own thoughts, prophecies, questions, comments or favorite shoe type on the page here. As much fun as I love the casual yet fierce look of the chestnut crushing clog, I’m all about the utilitarian and comfortable Lebanese kabkab.