The Downes Side: UFC 164 Predictions 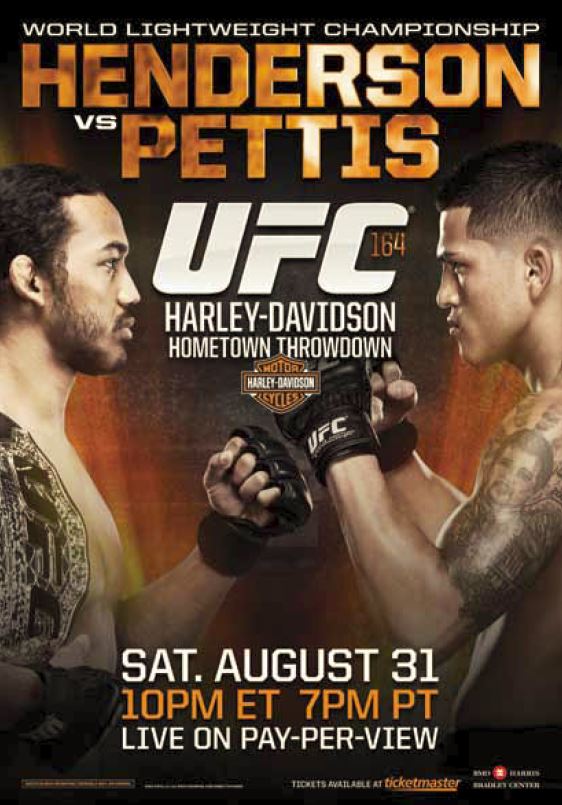 Thats right boys and girls, it’s time for the homecoming edition of the Downes Side! With so much going on, I think we all know the major news story heading into the weekend is the return of the Nostradamus of MMA to Milwaukee, Wisconsin.

In other news, there will be some type of mixed martial arts competition at the BMO Harris Bradley Center as a small upstart promotion by the name of the Ultimate Fighting Championship comes into town for an event simply titled, “UFC 164.” With a main event nearly three years in the making as Benson Henderon attempts to find a version of Oxi Clean that can remove soul stains as he defends his lightweight title against Anthony “Showtime” Pettis. In the co main event of the evening, former champion Frank Mir tries to make Josh Barnett’s return to the Octagon more unpleasant than if someone stole Barnett's comic books. 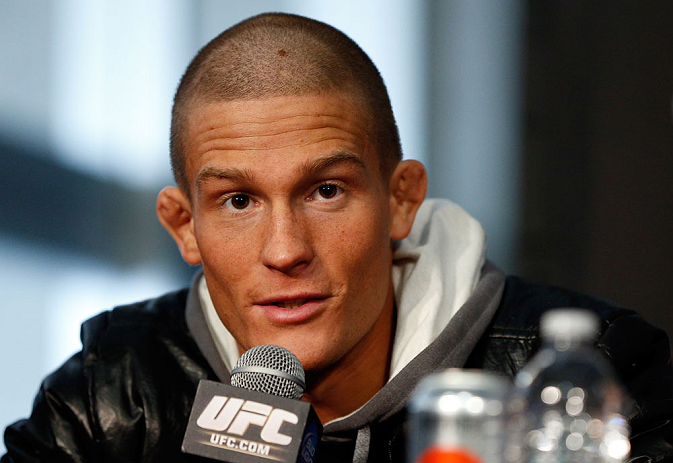 The main card begins in the featherweight division with two former top contenders looking to get back in the win column. It’s been a rough couple of years for Erik Koch (-150). He earned a title shot against Jose Aldo, lost it to injury and then suffered a brutal TKO loss to Ricardo Lamas in January. A Duke Roufus-trained striker with an extensive TKD background, Koch pairs his dynamic striking with seven career submission wins (including eight in the first round). After a five-fight win streak in the WEC/UFC, Dustin Poirier (+120) has dropped two of his last three, though those losses came to top contenders Chan Sung Jung and Cub Swanson. Another well-rounded fighter, he not only has an exciting, aggressive striking strategy, but the also holds the most submission wins in the division.

Despite their recent downfalls, both these fighters have the ability to make this a fast-paced, entertaining fight. Poirier struggled to keep up with Cub Swanson’s speed in his last fight and the same will hold true here. Koch has an unorthodox style that makes it hard for people to read where he’s attacking. Poirier will then try to get it on the ground, but Koch has the third highest takedown defense in the division so that will be quite the task. The first round will start slow, but Koch will get his timing by the second. He’ll catch Poirier with a high kick and then follow up for the TKO. 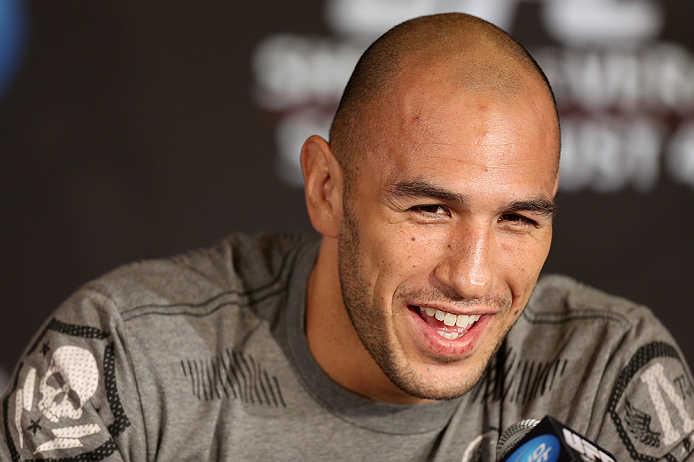 We jump up to heavyweight for Ben Rothwell (+105) and Brandon “The Truth” Vera (-120). A Kenosha, Wisconsin native and the missing link to the Sasquatch, Rothwell has alternated wins and losses his last eight fights. Brandon Vera hasn’t had good go of it lately, either. With only win in his last five fights, he returns to heavyweight division for the first time in five years. Adding some extra pounds to achieve success? When will we get to see that on the cover of Cosmo?

We should always be skeptical whenever a fighter talks about how great their conditioning is (especially a heavyweight), but Rothwell has come a long way from that ugly fight against Mark Hunt at UFC 135. Vera can use his speed and clinch to victory, but lately he’s shown big gaps in his defense. Rothwell’s fight against Brendan Schaub showed that he has one-punch knockout power and he’ll show it off again. Big Ben drops Vera worse than that Taco Bell clerk in high school (true story) and takes the first-round KO. 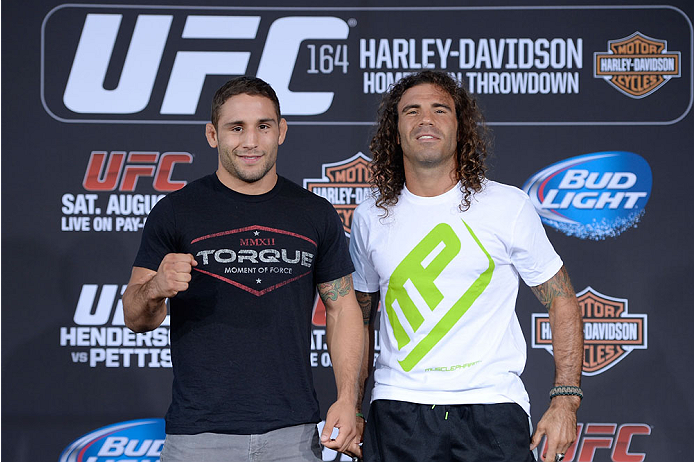 We return to featherweight for Chad Mendes (-450) and Clay Guida (+350). After sustaining the only loss of his career to Jose Aldo, Mendes has rattled off three straight first-round KOs. Guida had a successful, albeit questionable 145 lb debut in January against Hatsu Hioki. Honestly, it seems like Clay Guida has been involved in more controversial decisions than William Jennings Bryan.

Both fighters are strong, relentless grapplers who use their wrestling to set up their striking. Unfortunately for “The Carpenter,” Mendes does everything Guida does, but better (dancing and awesome hair excluded). Mendes has the best takedown percentage in the division. Couple that with his newly-harnessed power and striking accuracy from coach Duane Ludwig, and Guida’s chances of winning are as about as good as Bryan’s in the presidential election of 1900. Guida has never been knocked out, so at least he’ll have that going for him as Mendes takes all three rounds and wins the unanimous decision. 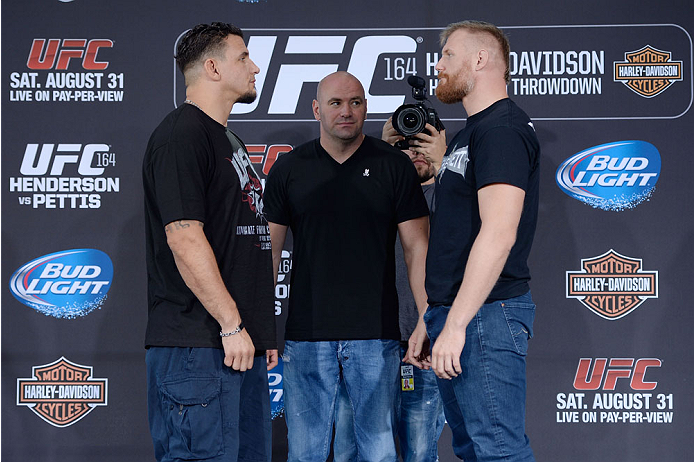 Back up at heavyweight, former champions and UFC 34 veterans Frank Mir (+145) and Josh Barnett (-175) finally fight one another. A legend in the division, Mir holds the most wins, finishes and fastest submissions in heavyweight history. Barnett returns to the UFC for the first time in a decade. With a high finish rate and takedown accuracy, Barnett has made quite a career for himself both in the US and Japan.

Mir has slowly been improving his standup, but his footwork isn’t quick enough to stop Barnett from closing the distance. Barnett will be able to get inside, tie up and slowly work Mir down to the mat. Once on the ground, Mir definitely can threaten, but Barnett has never been finished with a submission hold and that trend isn’t likely to change. Beating Mir will be harder than picking on a skiny heavy metal bassist, but the Warmaster still takes the takes the UD victory, gives an awkward interview and then retires to the hotel room for the manliest game of Magic the Gathering this town has ever seen. 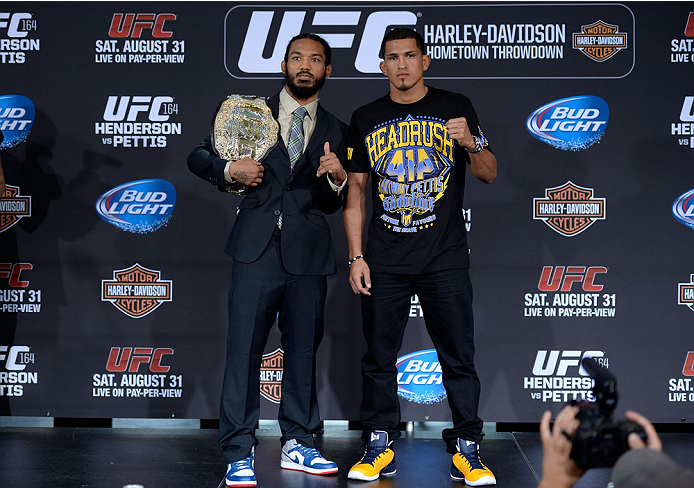 Time for the main event of the evening! After an unsuccessful UFC debut, Anthony Pettis (-105) has won three fights in a row (including devastating knockouts against Joe Lauzon and Donald Cerrone) to earn a shot at the UFC lightweight title.  Fighting in front of his hometown crowd, he looks to take the belt away from Benson Henderson (-125)  just like he did at WEC 53. Henderson has come a long way since that fateful December night. He’s won seven fights in a row using his demanding pace, incredible striking accuracy and powerful wrestling.

A lot has been made about their first meeting. I don’t know if any of you have seen it before, but Anthony Pettis actually pulled off quite an impressive kick during that fight. Nostalgia aside, when these two step inside the cage, their first meeting is like when  your wife suggests you should go on one of those five-day juice cleanses -- throw that crap out the window. The only way to defeat Pettis is to hold him down and control him so he can’t get any of his offense off. Henderson holds the strength/power advantage, but Pettis’s wrestling ability has evolved to the point where Henderson won’t be able to smother and control him like he’s done to previous opponents. In the standup game, Henderson can hold his own, but Anthony’s strikes are faster and of a far greater variety. The fight will be evenly matched throughout, but as it progresses, Henderson will get worried. Saying Pettis “stained his soul” is not hyperbole to promote a fight -- it’s in Henderson’s head. In the fourth, he’ll try to go into cruise mode and tie up Pettis. In the process, he’ll eat a kick that will rattle him. Pettis follows up with the ground and pound and becomes the newest UFC lightweight champion.

That wraps up another lactose-fueled edition of the Downes Side. Be sure to follow me on Twitter @dannyboydownes. Also, don’t forget to leave your own thoughts, predictions, or favorite cheese pairing on the page here. Personally I think that Schlitz and fried cheese curds can’t be beat. I usually sub Lite Ranch for a dipping sauce, heart disease runs in the family.