The Downes Side: UFC 163 Predictions 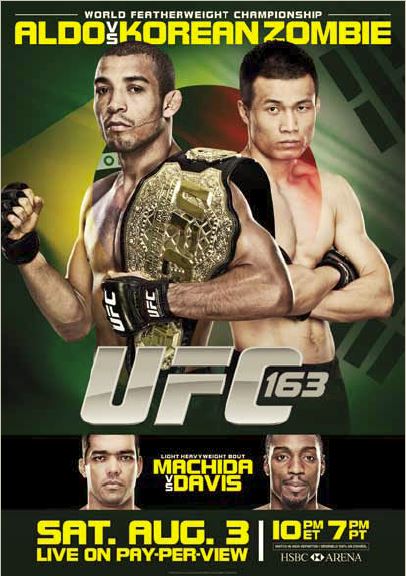 That’s right boys and girls, it’s time for another world championship edition of the Downes Side! Especially with the Finnish government shutting down the World Sauna Championship, UFC title fights are more popular than ever.

At least twice as entertaining as sitting in an uncomfortably warm room with senior citizens will be UFC 163 this weekend, live from the HSBC Arena in Rio de Janeiro, Brazil. The main event of the evening pits featherweight champion Jose Aldo as he defends his title against Chan Sung Jung. (Some people know Jung by his nickname, “Korean Zombie,” but no way that catches on.) The co-main event of the night will shake out the top rungs of the 205-lb ladder as Lyoto "The Dragon" Machida tries to defeat “Mr. Wonderful” Phil Davis for another shot at the title. Time to sweat the details.

John Lineker (21-6) vs Jose Maria (33-3 2NC)
The main card begins in the flyweight division with John “Hands of Stone” Lineker and Jose “No Chance” Maria. Lineker makes his fourth appearance in the Octagon, and looks to keep the momentum going after two big wins against Azamat Gashimov and Yasuhiro Urushitani. Primarily a striker, he showed a much more well-rounded game when he fought last May and placed his stone hands on Gashimov’s face for a 2nd-round TKO. Another flyweight who can threaten from anywhere, Maria holds 15 KOs and 13 submission victories.

Experience is one of those intangibles that we often talk about in MMA. It certainly matters, but where and who you fight count just as much as the total number of fights. Maria has the ability and skill set to threaten, but maybe his nickname should be the “Recycling Man” for all the cans he’s crushed. His last ten opponents have a combined record of 28-32. I wouldn’t say that he has no chance, but another potential nickname could be, “not that great of a chance,” (NTGC for brevity’s sake). He’ll find himself overwhelmed early, and unable to handle the big step up in competition. Lineker is one of the more powerful fighters in the division and he finishes this one with a 1st-round TKO and a solid case for calling out Mighty Mouse.

Thales Leites (20-4) vs Tom Watson (16-5)
We bump up to the middleweight division for Thales Leites and Tom “Kong” Watson. Leites returns to the Octagon for the first time since August 2009. This may come as a shock to most of you, but this gentleman from Brazil has a black belt in something called “jiu jitsu,” and has used these skills to earn 13 career submissions. After losing his UFC debut, Watson came back strong with a Fight of the Night performance against Stanislav Nedkov in February, earning the 2nd round TKO with brutal knees in the clinch.

This is one of those rarely-seen striker vs grappler battles. Simply put, Leites’ ground game is on an entirely different level. Watson’s best path to victory is to keep it standing. Unfortunately, his striking style relies heavily on standing in the pocket and clinching. The closer you get to Thales Leites, the easier it is for him to grab you and put you on the ground. When Watson crowds his space, that’s exactly what’s going to happen. Severely outgunned on the ground, Leites locks in a rear naked choke in the first and wins it.

Cezar "Mutante" Ferreira (6-2) vs Thiago Santos (8-1)
We remain at middleweight for Cezar Ferreira and Thiago Santos. "Mutante" steps into the Octagon for the second time; he last fought at UFC 147, where he won the first season of The Ultimate Fighter Brasil. Thiago Santos makes his UFC debut on short notice, stepping in for the injured Clint Hester. Ferreira has offensive capabilities all around, but has shown a lack of defense in the past. Despite questionable grappling, Santos has solid Muay Thai and a reach advantage.

Combining the fact that it’s short notice and a step up in weight class, Santos may have bitten off more than he can chew. Mutante's chin has been suspect in the psat, so there’s a possibility for him to win, but the size and power advantage will likely be too much for him to overcome. Look for Ferreira to bully Santos around and pick him apart on the feet. As long as Mutante doesn’t gas out in the third like it appeared in his last fight, he’ll be able to push his way to a unanimous decision win.

Lyoto Machida (19-3) vs Phil Davis (11-1 1NC)
That brings us to the co-main event of the night. Since losing to Jon Jones at UFC 140, “The Dragon” has rattled off wins against Ryan Bader and Dan Henderson. Responsible for the biggest influx in karate students since Ralph Macchio, Machida’s footwork and brilliant counter-punching have have made him a light heavyweight force for the last five years, much of which he spent undefeated and as champion. Phil Davis also rides a two-fight win streak with wins against Wagner Prado and Vinny Magalhaes, both Machida's countrymen. A four-time All American wrestler at Penn State, Davis utilizes smothering top control and a wide array of chokes to win.

There’s nothing surprising about either fighter’s strategy coming into this fight. Davis wants to bring it to the ground and Machida wants to work that karate magic. Mr. Wonderful may be outmatched in pure striking, but he has steadily improved enough to find a way to close the distance without getting caught. Once he has the tie-up, he’ll be able to finish the takedown and take top position. Davis’s last fight against Magalhaes showcased his jiu jitsu defense and he’ll be able to avoid Machida’s submission attempts. This pattern will repeat all three rounds and Davis takes the UD.

Jose Aldo (22-1) vs Chan Sung Jung (13-3)
Time for the main event of the evening! Jose Aldo makes his fifth title defense in the UFC after ruining Frankie Edgar’s featherweight debut in February. Extremely aggressive, he holds pretty much every record in the 145-lb division. Since coming over to the UFC from the WEC, Chan Sung Jung has gone undefeated. Known for his entertaining fighting style, the majority of "The Korean Zombie's" wins have come via submission.

Everyone knows that the Korean Zombie can take a shot. When you’re facing Jose Aldo, however, that strategy is about as sound as playing dead during a bear attack. Jung has a chance if he can bring it to the later rounds when Aldo tends to fade, but it’s not likely to happen. The Korean Zombie likes to press forward and stalk his opponents. It will be effective in limiting Aldo’s vicious leg kicks, but he’ll absorb a lot of damage in the process. This will cause him to try harder to bring the fight to the ground, but by then the damage will be done. A weathered Jung won’t be able to finish the takedown, Aldo will reverse and attack from top position. He’ll unleash a flurry and take the 2nd round TKO.

That wraps up another gold plated edition of the Downes Side. Be sure to follow me on  Twitter @dannyboydownes. Also, don’t forget to leave your own predictions, compliments, laudations and favorite World Sauna Championships memory here. Just look at how much fun we used to have....