The Downes Side: UFC 162 Predictions

That’s right boys and girls, it’s time for another 4th of July version of the Downes Side! Whether you’re an American celebrating the Declaration of Independence or a German celebrating the canonization of Saint Ulrich of Augsburg, MMA fans of all stripes will be celebrating what usually ends up being once of the best UFC events of the year.

Ulrich may be the patron saint against fevers, but things will be at a fever pitch as the Ultimate Fighting Championship returns to the MGM Garden Arena in Las Vegas (current home of above-febrile temperatures) for UFC 162. The main event features a middleweight title fight as current champion Anderson Silva takes on Chris Weidman. Considered by many to be the greatest MMA fighter of all time, Silva looks to add to his already impressive legacy while Weidman tries to create one of his own. The co-main event of the night pits former champion Frankie Edgar as he looks to make his way back to a title shot against Charles Olivaeira. 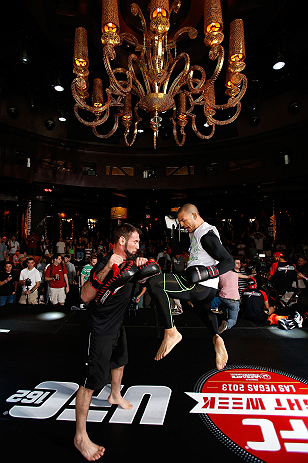 The main card kicks off with a featherweight contest between Cub Swanson and Dennis Siver. Since losing his UFC debut to Ricardo Lamas, Swanson has won four in a row with a combination of athleticism and technical striking. While his striking acumen certainly deserves praise, people often overlook his grappling ability, and he actually holds the highest takedown accuracy in WEC/UFC history. Another dangerous kickboxer, Dennis Siver is undefeated since dropping down to the 145-lb division. With a career 10-5 record in the UFC, the 34-year-old looks to make one last push towards gold.

An early favorite for Fight of the Night, this fight won’t make it to the ground as both fighters will aggressively search for the knockout. At first glance, this looks to be a power vs speed battle. Upon closer inspection, though, I don’t believe Siver has the power advantage that many perceive. He hasn’t KOd an opponent in some time, and while that doesn’t mean he’s not dangerous, his ability to change the course of a fight with a single strike has diminished. Look for Cub to string combos together and move away to avoid the counter attack. Swanson will win by unanimous decision and move closer to the front of the line, which is currently about as long as the one for those cronuts, for a featherweight title shot. 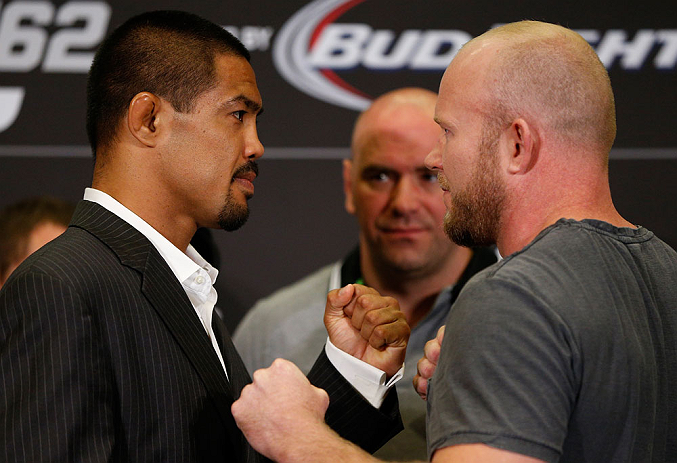 We jump up to middleweight for a bout between two super-nice guys with super-menacing nicknames: Mark “The Filipino Wrecking Machine” Munoz vs. Tim “The Barbarian” Boetsch. A string of injuries and a KO loss to Chris Weidman last July put Munoz in a bad place. This caused him to transform into the Filipino Eating Machine and balloon up 260 lbs. (see his set of before and after pics worthy of an Oprah ep). Munoz looks to get back to the level that earned him a reputation for one of the most feared right hands in the sport. Another positive product of weight loss, Tim Boetsch has seen a career resurgence since dropping down a weight class. Incredibly strong with a dangerous clinch, Boetsch hurts opponents from a variety of positions.

Evenly matched, both fighters are relentless, highly active guys with big power. Despite their equivalent skill sets, Munoz’s pace will be the difference here. In the bouts against Okami and Costa Philippou, Boetsch seemed to struggle when his opponent was the aggressor. Yes, he finished Okami in one of the best third rounds of the last few years, but Munoz won’t make that same mistake. He’ll tie up Boetsch and push him against the cage. With a combination of grinding wrestling and power shots on the breaks, Munoz works his way to a unanimous decision win. Will he then reveal that his real weight loss secret was the Tony Little Gazelle? Don't blink! 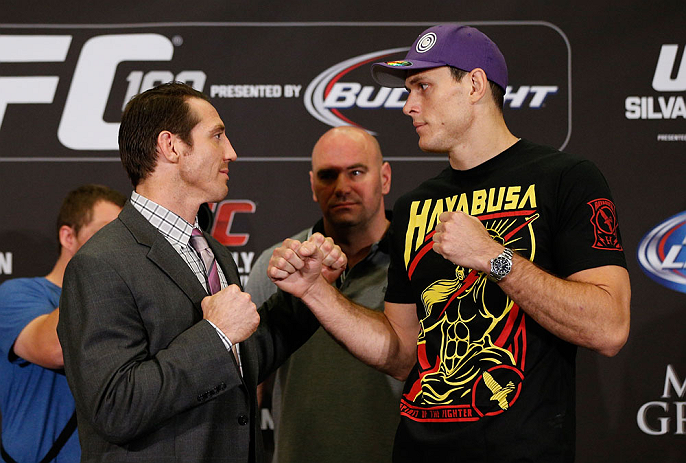 We stay at middleweight as a pair of Strikeforce vets make their Octagon debuts. Always the bridesmaid, Tim Kennedy’s only two missteps during his Strikeforce career came in title fights. A strong wrestler with solid boxing, he actually holds the record for most submission wins in SF history. Roger "Yes, That Kind of Gracie" Gracie also knows a little bit about submissions and has jiu-jitsu world championships to prove it. Despite a relatively short professional career, Gracie has faced stiff competition from the beginning and risen to the occasion.

There’s no secret to Gracie’s strategy. He wants to bring this to the ground and work his world champion level jiu-jitsu. He’s still finished high-level opponents despite this obvious M.O., but if there’s one thing Kennedy’s coach Greg Jackson enjoys more than Lewis Carroll poems, it’s developing a game plan. Kennedy will foil Gracie’s attempts to bring the fight to the ground in the first round. As the second begins, Roger will force the issue and eat a big right hand. With a frumious Bandersnatch, Tim Kennedy scores a 2nd round TKO. 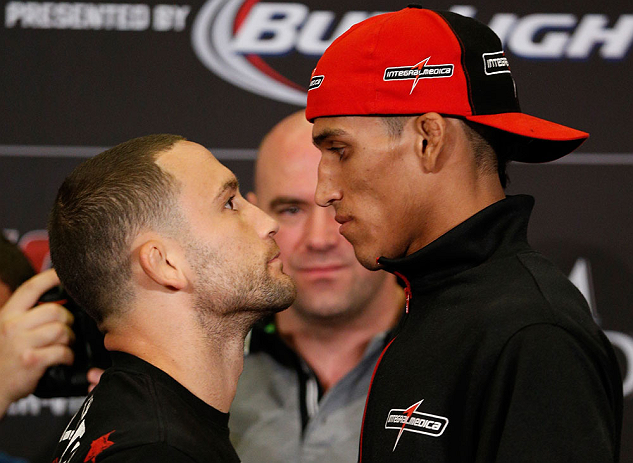 We return to the featherweight division for the co-main event of the night. After giving champ Jose Aldo his greatest test yet, Frankie Edgar looks to make Bruce Springsteen, Jon Bon Jovi, Justice Samuel Alito and all the other New Jersey rockers proud. Despite losing his last three fights, Edgar still deserves to be one of the top fighters in either the 155- or 145 lb-divisions with his takedowns, fast hands and relentless pace, Standing in his way will be 23-year-old submission specialist and Lincoln tunnel rival Charles “Do-Bronx” Oliveira. With the third-shortest average fight time among active fighters, Oliveira holds 9 career submission wins.

Edgar hasn’t had a three-ound fight since 2009. It may just seem like useless trivia, but it will be interesting to see how he adapts to the 15-minute time limit. Five round fights seem to fit his style better, but he’ll have to start fast against someone as explosive as Oliveira. No one questions Oliveira’s skills on the ground, but he leaves much to be desired on the feet. His last three losses have come via first round-T/KO. It won’t happen a fourth time, but that’s where the good news ends. Edgar has the speed and wrestling to counter Oliveira’s quickness. He’ll do his usual thing, mixing up strikes and attacking from a variety of angles. When the third round comes, a fatigued Oliveira will fade just as Frankie starts to heat up. Edgar takes this in the third with a TKO so impressive, even Justice Ruth Bader Ginsberg will give Alito a fist bump. 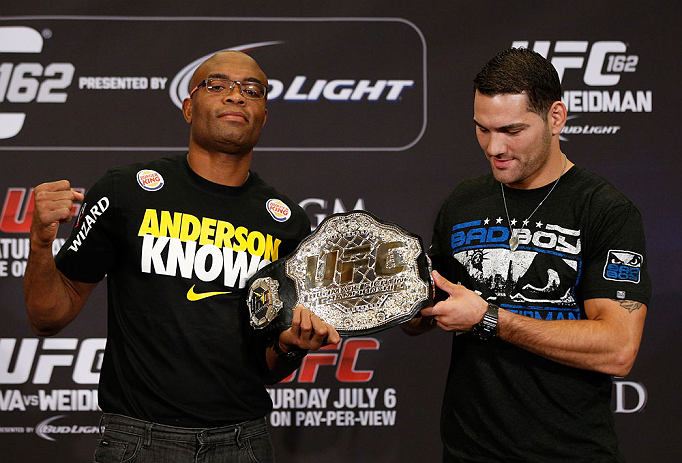 That brings us to the main event of the evening! After defending his title ten times and not losing a fight since the movie Meet the Fockers was #1 at the box office, there’s not much else to say about Anderson Silva. Even at the age of 38, he still appears to be on a completely different level than his opponents. After two impressive wins against Demian Maia and Mark Munoz, two-time All-American wrestler Chris Weidman tries to bring the champion back down to Earth.

Many (including high-profile UFC fighters) have said that Chris Weidman is the man to end Silva’s reign. Their reasoning follows one of two ways: 1) Silva is getting old and he has to show weakness sometime or 2) Chael Sonnen gave Anderson a hard time and Weidman has the wrestling ability to duplicate it, then follow up with a finish. The first line of reasoning follows the same path as the guy who keeps betting black at the roulette table because, “It has to come up some time.” It might have worked for Wesley Snipes, but then again, the IRS sent that dude to prison for three years. The simple fact of the matter is that while Weidman is an excellent wrestler, people have read too much into the first Silva/Sonnen fight. Was Anderson in trouble 95% of that match? Yes, but that was a simple aberration on an otherwise flawless UFC career. Always one to play with his food before he eats it, Silva will mess around and come out slowly for the first round. Then in the second, he’ll drop Weidman with a knee and secure the TKO win.

That wraps up another St. Isidor of Seville approved edition of the Downes Side. Be sure to follow me on Twitter @dannyboydownes. Also, don’t forget to leave your own thoughts, predictions, pot luck recipes or favorite saint on the page here. If I know the internet like I think I do, I’m sure they’ll all be well reasoned and considerate.