The Downes Side: UFC 161 Predictions

That’s right boys and girls, it’s time for the first ever Manitoban edition of the Downes Side! It’s been a long time coming and I’m sure you’ve all marked your calendars for the province’s premier summer event. Take that, Winnipeg Fringe Theatre Festival!

With matchups of fan favorites meaning that someone's hero has to lose, there will be as many broken hearts once the UFC rolls into the MTS Centre in Winnipeg as there are among job-hunting theater majors. The main event of the night features two stars who have put on tremendous one-man shows over the years as “Suga” Rashad Evans and Dan Henderson compete for another chance to be in the light heavyweight title mix. In the co-main event, Sir John Falstaff  Roy Nelson looks to run his KO win streak to four in a row against Stipe Miocic. 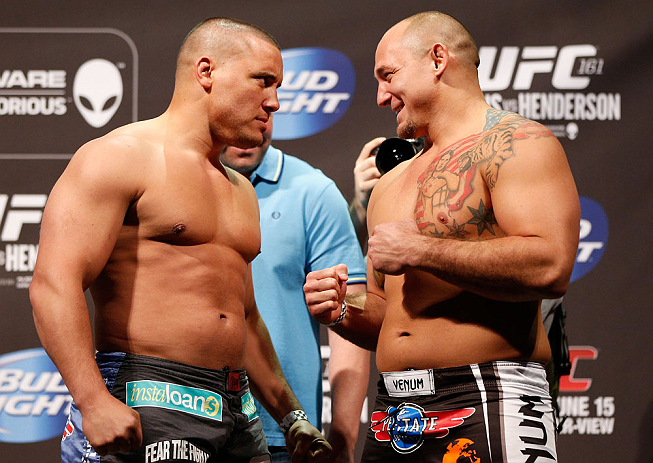 The main card begins in the heavyweight division with an all-LSU alum showdown between Pat “HD” Barry and Shawn “The Savage” Jordan. Known for his kickboxing, his post-fight tears and his LOVE FOR CAPSLOCK, Pat Barry embodies his “Hype or Die,” philosophy inside the Octagon. His aggressive striking has earned him seven career knockouts, but the style has also put him on the receiving end of a number of losses. Jordan is another powerhouse who's beaten the likes of Lavar Johnson, Oli Thompson and Mike Russow. The odds of this one not going the distance are about the same as the products of famous Winnipegger Irvine Robbins being delicious.

People constantly point out the flaws in Pat Barry’s ground game, but his last couple of of fights should have quelled those doubts. Couple that with the fact that he actually defends 80% of all opponents' takedowns, and Barry isn’t as one dimensional as others may want him to seem. Another criticism against Barry is his size, but in this case he’s only giving up a 1” height and reach disadvantage. Jordan may be strong and powerful, but he doesn’t have Barry’s striking pedigree. Late into the first round, Pat will drop Jordan with a big left hook then ground and pound his way to a TKO win. 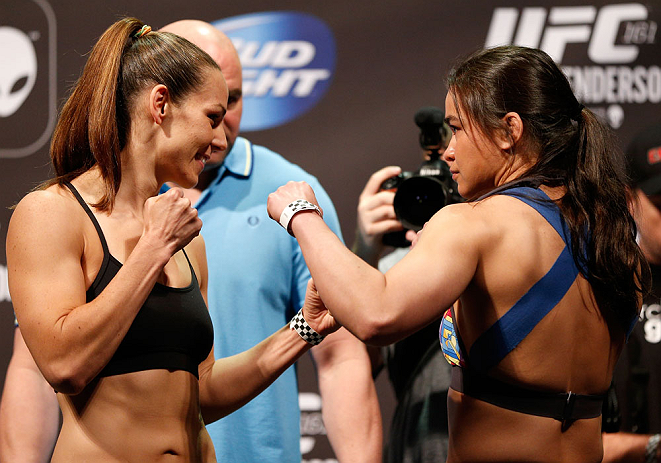 We move to the women’s bantamweight division for Canada's Alexis Davis and the UK's Rosi Sexton. A member of Cesar Gracie fight team, Davis has used her impressive ground game en route to seven career submission victories. Manchester’s Rosi Sexton also prefers a ground-based attack, but hers revolves around bringing her opponents to the ground and beating them up.

I give Sexton the slight advantage on the feet, but it won’t be enough. Eventually she’ll find herself in Davis’s grasp, and then it’s only a matter of time. Once on the ground, Sexton will be completely outmatched. Davis will overwhelm her smaller opponent worse than the Winnipeg Jets did the Soviet national team in 1978. Davis may not defeat Communism (THIS time), but she’ll defeat Sexton with a rear-naked choke in the 2nd. 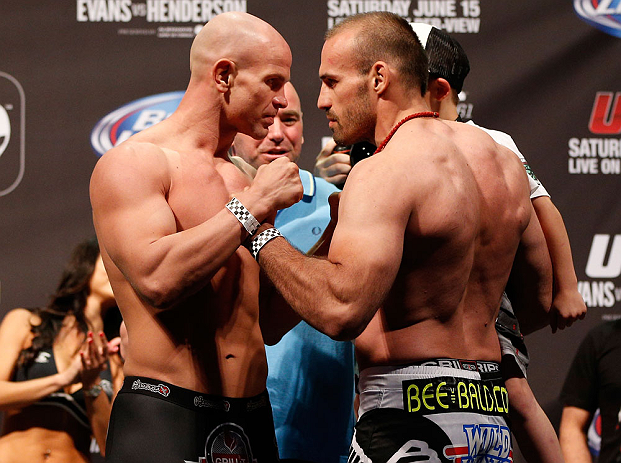 We jump up to light heavyweight for Ryan “Big Deal” Jimmo and Igor “The Duke” Pokrajac. After an amazing seven-second knockout against Anthony Perosh at UFC 149, Ryan Jimmo dropped a decision to James Te Huna in February. Since making his UFC debut in 2009 Pokrajac has kept his spot on the roster with a combination of grizzled determination and heavy hands. Basically he’s a lot like Sergeant Slaughter, minus the G.I. Joe sponsorship ("Pokrajac" would be too hard to pronounce for American audiences).

Both fighters are big, strong individuals with comparable grappling abilities, and we all know what that means...STRIKING! Pokrajac certainly has the power to stop Jimmo, but he’s one-dimensional. Despite being 34 years old with 35 career fights, he still plods forward and looks to brawl. Jimmo is a much more diverse striker and will use that to his advantage. He’ll pick his shots and incapacitate “The Duke” like that flight of stairs in the movie The Wings of Eagles. Look for Pokrajac to charge forward but be stifled at every attempt. Jimmo counters effectively, avoids the haymaker and secures a unanimous decision victory. 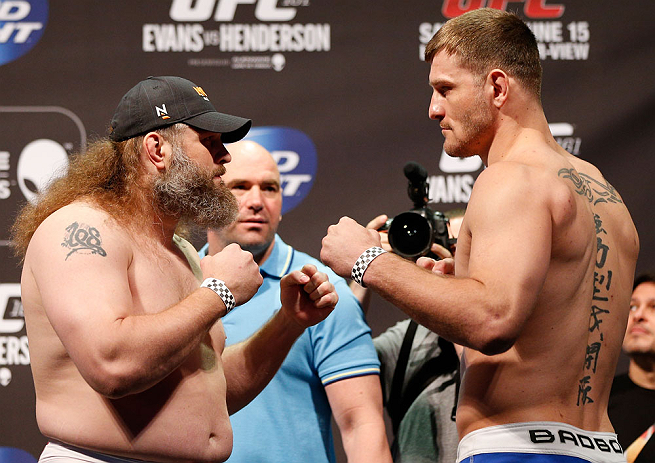 That brings us to the co-main event of the night between Roy “Big Country” Nelson and Stipe Miocic. After finishing his last three opponents in the first round, Nelson is on the cusp of making himself a true contender in the division. While he may hold a Brazilian jiu-jitsu black belt, his right hand is the real star of the Roy Nelson Show. A former collegiate wrestler and Golden Gloves boxer, Miocic looks to rebound from a TKO loss at the hands of Stefan Struve in September.

Despite the fact that he refuses to follow Jared Fogle’s diet advice, Big Country has carved out the quite the impressive resume in the UFC. His iron chin and big punches have helped him cruise past more aesthetically-pleasing opponents. Miocic’s best chance to win this fight will be to take it to the ground and attack from top position. In order to do that, though, he’ll have to charge into the Big Country customs enforcement. Anyone trying to cross his borders without proper clearance is in for  rough time. That overhand right will make itself known once more as Nelson wins via TKO in the first. 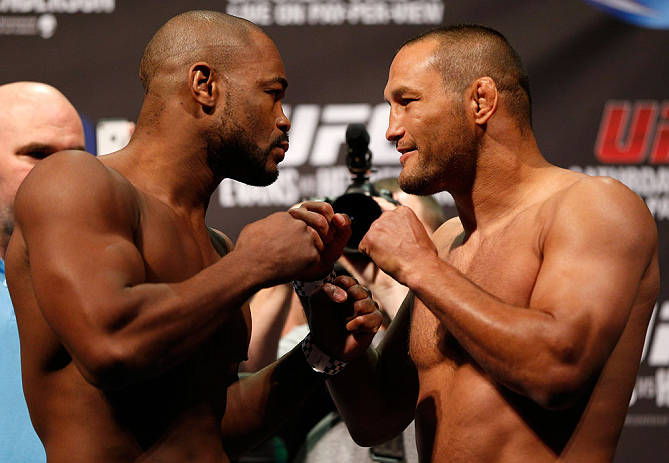 Time for the main event of the evening! Former UFC champion Rashad tries to rebound from two lackluster showings against Jon Jones and Antonio Rogerio Nogueira and reclaim his spot among the division’s elite. A former Strikforce/PRIDE champion, Dan Henderson also tries to recover from a disappointing performance against Lyoto Machida at UFC 157. The oldest active fighter in the UFC, Hendo has a Greco-Roman wrestling base and a devastating right hand known in many circles as “the H-bomb.”

If the movie Harold and Maude taught us anything, it’s that age is just a number... at least when it comse to geriatric adoration. In MMA, on the other hand, numbers matter (take 10-9, for example). Henderson’s power can certainly be a game changer, but there’s no way he competes with Rashad’s athleticism. Evans’ speed will help him dart in and out and avoid being caught by Hendo’s right hand. If Henderson finds a way to bridge the gap, I still don’t think he’ll be able to hold Rashad down and grind him out. As Maude would say, “Grab the shovel Harold” -- Evans by UD.

That wraps up another Winnipeg City Council approved edition of the Downes Side. Remember to follow me on Twitter @dannyboydownes. Also don’t forget to add your own thoughts, predictions, comments, insults and favorite upcoming fringe festival acts here. Hopefully Saucy Jack and the Space Vixens make the trek up north.