The Downes Side: UFC 160 Predictions 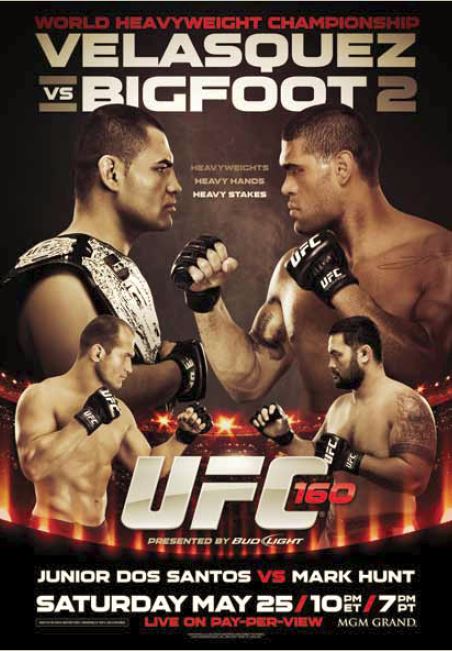 That’s right boys and girls, it’s time for another Memorial Day Weekend edition of the Downes Side! While many of you in the United States will be celebrating one of your federally mandated holidays with barbecues, my progressively-minded friends and I will be celebrating the birth of actor Todd Bridges.

Different strokes move the world, and so will the Octagon’s finest this weekend for UFC 160. Live from the MGM Garden Arena in Las Vegas, Nevada, the main event puts the heavyweight title on the line as the champion Cain Velazquez gives everyone’s favorite Bigfoot (well, besides this guy) a rematch. The co-main event of the evening showcases another exciting heavyweight matchup as Junior Dos Santos looks to get a few punches (and some words) in against the most loquacious man in the division -- Mark Hunt.

Donald Cerrone (19-5 1 NC) vs KJ Noons (10-5)
The main card begins in the lightweight division with the Donald “Cowboy” Cerrone and K.J. “King” Noons. With an arsenal as impressive as his Stetson, Cerrone looks to rebound from his January loss against Anthony Pettis’, whose left leg punished Cowboy’s liver worse than the first time someone introduced you to Long Island Iced Teas. Noons also seeks to get on the right track after dropping four of his last five fights, the most recent one a controversial split decision dropped to Ryan Couture. Making his UFC debut, he’ll try to use his technical boxing and pick up his ninth career knockout.

The smart move for Cerrone would be to take Noons down and work his far superior submission game. But do you think that’s what John Wayne would have done? Never! He’d walk right up to his enemy and punch him square in the face. It worked for Lieutenant Colonel Kirby Young in Rio Grande and and it’ll work for Cowboy here. His much more diverse striking style will be able to throw off his opponent’s rhythm. He’ll also utilize his reach advantage to avoid Noons’ power punches. Not the safest strategy, but Cerrone strikes his way to a unanimous decision victory.

Gray Maynard (12-1-1 1 NC) vs TJ Grant (20-5)
We remain in the lightweight division for a fight that will determine the #1 contender. After a knee injury forced Maynard out of his fight against Joe Lauzon, “The Bully” has not competed since June 22, where he secured a split decision win over Clay Guida. Known for his strength and wrestling ability, Maynard has routinely shown that he can change the course of a fight with a single punch. Since dropping down to lightweight, TJ Grant has gone undefeated with wins over Shane Roller, Carlo Prater, Evan Dunham and Matt Wiman. A striker with a wide array of techniques, Grant uses both distance striking and clinch work to batter his opponents more heavily than the deep-fried Oreo stand at the carnival.

Grant does have tremendous striking skills, but he has a glaring susceptibility. As he strings combinations together, his footwork and stance tends to become sloppy. When you’re facing someone with Gray Maynard’s wrestling, you can’t be caught off balance. Grant will tag Maynard in the early part of the round, but eventually The Bully will get a hold of him and bring it down to the mat. Maynard wins via unanimous decision and gets a late-summer title matchup with Bendo.

James Te Huna (18-5) vs Glover Teixeira (20-2)
We jump up to light heavyweight for another fight with title implications as James Te Huna takes on Glover Teixeira. A much more popular Australian export than Paul Hogan, James Te Huna has compiled a 5-1 record in the UFC including two first round finishes. Riding an 18-fight win streak, Teixeira most recently ended Quinton Rampage Jackson’s UFC career in January. A jiu-jitsu black belt, the majority of his wins have come from his fists.

Despite picking up the win, Glover Teixiera’s fight against Rampage slowed down the hype train. He attacked relentlessly, but tired easily and looked clumsy by the end. As long as he avoids the initial onslaught, this fact will allow Te Huna to make a tremendous jump up the 205-pound ladder and put his name in the mix. Teixeira will land big punches, but he’ll tire himself out trying to take down the Aussie brawler. Te Huna will catch his exhausted opponent with a big uppercut, drop Teixeira and secure the ground-and-pound victory in the second round. Sound crazy? So does handing me a Vegemite sandwich.

Junior Dos Santos (15-2) vs Mark Hunt (9-7)
We step up to the heavyweight division for the co-main event of the night. After settling his visa issues, the talkative Mr. Hunt looks to go from MMA afterthought -- most thought he'd let the UFC buy out his contract when they took over PRIDE, but he insisted on taking a fight and started racking up wins -- to number-one contender for the most illustrious title in the world. It’s your typical Cinderella story; you know, if she were 265 lbs., Samoan and broke people’s jaws. Looking to play the role of the nicest evil step-sister you’ve ever met will be former champion Junior dos Santos. After losing his title in December, “Cigano” wants that rematch sooner rather than later.

Much like Donald Cerrone, the smart move for this fight would be for JDS to bring it to the ground and earn the easy (by comparison) win. Some fighters, though, don’t fight to win. They do it because it’s something they love to do. JDS is one of these people, but that passion comes at a cost. The two will stand toe to toe and this benefits Hunt. The Super Samoan will land an overhand right that will stun dos Santos. He’ll then follow through with his signature left hook and set himself up for a heavyweight title shot. Can’t wait to hear all his press conference soliloquies? Me neither. Mark Hunt via KO round 2.

Cain Velasquez (11-1) vs Antonio Silva (18-4)
Time for the main event of the evening! Heavyweight champion Cain Velasquez makes his first title defense since taking the belt back from Junior dos Santos at UFC 155 in December. Owner of the highest striking rate in UFC history, he also owns seven first-round finishes. Since being one of those first-round victims in 2012, “Bigfoot” Silva has won two in a row including an amazing third-round knockout of Alistair Overeem.

When these two first met at UFC 146, Velasquez completely dominated, and the same will happen here. Cain will not make the same mistake as Overeem and taunt or disrespect his opponent. He’ll go in there with his killer instinct and try to finish it as soon as possible. As Lawrence Peter Berra once said, it’ll be “déjà vu all over again.” Velasquez will put Bigfoot on his back, work his ground-and-pound and likely give Silva a scar to match theone from their first encounter. Velasquez retains the title and posts another dominant first-round victory.

That wraps up another memorable edition of the Downes Side! Be sure to follow me on Twitter at @dannyboydownes and make your UFC 160 predictions here. Also, don’t forget to leave your own thoughts, predictions, pasta salad recipes or favorite Todd Bridges roles in the comments.