The Downes Side: UFC 159 Predictions 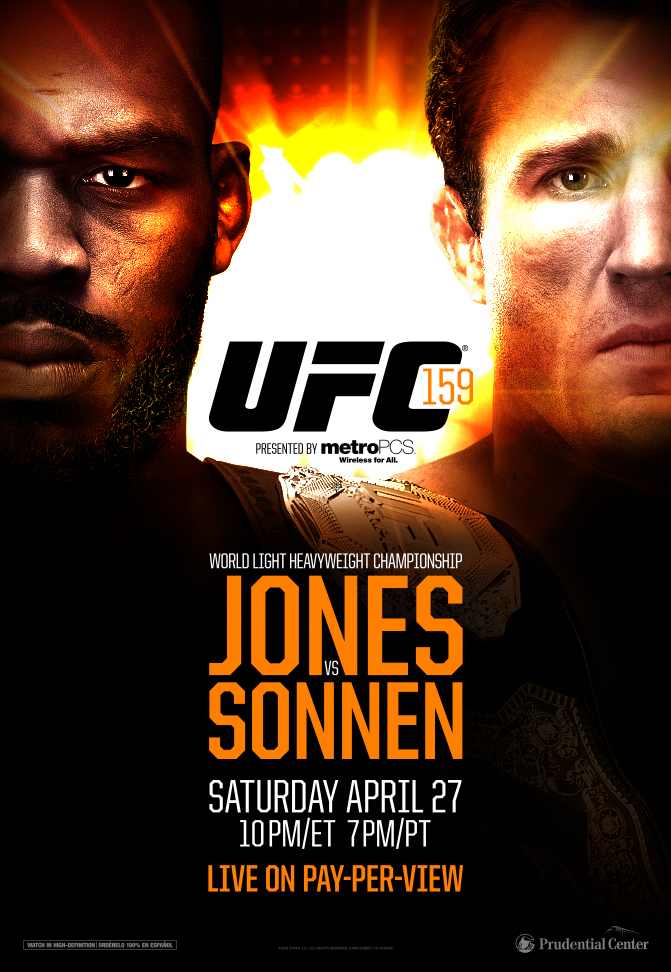 That’s right boys and girls, it’s time for another New Jersey-based edition of the Downes Side! If you thought the last one was great, this one promises to be more fun than the Garden State's upcoming Earth, Wind & Fire concert.

Even though it’s not September, the Shining Stars of the UFC roll into the Boogie Wonderland of Newark, New Jersey for UFC 159. Live from Prudential Center, Jon Jones will defend his light heavyweight belt against Chael Sonnen. With hostilities beginning in September, the conflict will finally end with some intellectual discussion held in the form of fisticuffs. The co-main event of the evening features two other men who probably won’t exchange Christmas cards, as Michael Bisping and Alan Belcher look to climb up that middleweight ladder.

Jim Miller (22-4) vs Pat Healy (29-16)
The main card kicks off with a lightweight contest between Jim Miller and Pat Healy. At UFC 155 in December, Miller earned his 11th UFC victory (most in lightweight history) by beating Joe Lauzon in an event that was about as bloody as the last Rambo movie. When he’s not busy busting up on opponents with elbows, Miller has used his wrestling and ground game to score 12 career submission victories. Making his UFC return after a one-and-done stint in 2006, “Bam Bam” Healy holds a six-fight win streak and the most takedowns in Strikeforce history.

Relatively unknown, Healy has more than enough skills to compete in the UFC lightweight division. Much like the Soviets in Rambo III, though, he’s simply outgunned by one man. Miller’s superior hands will control the standup exchanges. Healy will move in to initiate the clinch, but Miller will defend. As the fight goes on, Miller will bring the fight to the ground himself and start working submissions. Healy will be able to hold on, but only long enough to see himself lose the unanimous decision.

Phil Davis (10-1 1 NC) vs Vinny Magalhaes (10-5 1 NC)
We bump up to light heavyweight for another grudge match, this one between Phil “Mr. Wonderful” Davis and Vinny Magalhaes. After his first fight with Wagner Prado ended in a no contest (due to an eye poke), Davis secured an anaconda choke victory in the rematch. A four time All-American wrestler at Penn State, he’s taken down every opponent he’s ever fought. An Abu Dhabi gold medalist, Malgalhaes could arguably be the best pure submission grappler in the division.

Magalhaes finally got this fight after calling out Davis on Twitter. Just like I did with all those POGs I have laying around my parents' basement, Vinny will learn that sometimes you regret getting what you want. This fight will be another textbook victory for Mr. Wonderful. He’ll use his reach advantage to keep the distance, use that to transition to a takedown and control from top position. Magalhaes’ grappling ability will save him from submissions, but not from the ground and pound. Davis by 3rd-round TKO.

Roy Nelson (18-7) vs Cheick Kongo (18-7-2)
We move on to the heavyweight division for Roy Nelson and Cheick Kongo in a playful showcase of the body type spectrum of the heavyweight division. In a performance much more impressive than his 40-yard-dash performance against Shane Carwin in the TUF 16 coaches' challenge, Big Country delivered a first-round KO against Matt Mitrione at the Finale. After suffering a first-round knockout at the hands of Mark Hunt, Kongo bounced back with a win over Shawn Jordan last July. With the second-most wins in UFC heavyweight history, Kongo actually has an underrated takedown game with a 63% success rate.

We all know that Roy Nelson has a great chin and hits hard. If that right hand strikes flush, it’ll be all over for Kongo. That’s not going to be how it plays out, though. Kongo will get the clinch and bring this fight to the ground. Despite his grappling accolades, we haven’t seen Nelson threaten with his ground game. Look for Kongo to smother Nelson from top position and pick up the unanimous decision win.

Michael Bisping (23-5) vs Alan Belcher (18-7)
We roll onto the co-main event of the evening between Johnny Cash’s #1 fan and the guy that fans would most like to Hurt.  Things certainly aren’t cordial between Michael Bisping and Alan “The Talent” Belcher. Looking to rebound from his recent loss to Yushin Okami, Belcher prepares for another push into the elite level of 185-pounders. Bisping also looks to bounce back from a loss after Vitor Belfort’s brutal head kick in January. Never one to mince words, Bisping has called Belcher’s career “pathetic" said that “No one gives a [expletive] about Alan Blecher.” Certainly not gentlemanly, that type of language will never get him invited to Buckingham Palace for Queen Victoria’s 194th birthday next month.

This fight is going to be a kickboxing fight. The Count’s grappling has steadily improved, but he doesn’t have the same ability as Okami to smother Belcher. The Talent’s superior footwork will allow him to mix his punches with knees and elbows. By the third round, this will frustrate Bisping enough that he will try to rush in for a takedown. This will give Belcher the opening he needs as he locks up the third round guillotine victory. Afterward, I’m sure Bisping will do the proper thing and apologize. Then, and only then, will he be welcome at the Derbyshire Well Dressings.

Jon Jones (17-1) vs Chael Sonnen (27-12-1)
Time for the main event of the evening! After competing as coaches for our amusement during season 17 of The Ultimate Fighter, Jon Jones and Chael Sonnen will finally fight each other...for our amusement. At the age of 25, Jon Jones is already on the cusp of becoming the most decorated light heavyweight in UFC history. This time around he’ll be making his fifth title defense and seeks to take Tito Ortiz’s record before setting his sights on bigger prizes.  At 36 years old, Chael Sonnen may go down in history as the most decorated talker in UFC history. He steps inside the Octagon for the first time since losing to Anderson Silva at UFC 148 in July.

We all know that Sonnen can’t stand with Jon Jones. That only leaves one other option. While he did have success taking down Anderson Silva, Bones is much larger and holds a takedown defense rating of 100% (that means he’s never been taken down). In recent media events, Sonnen has stated that Jon Jones could beat Mike Tyson and Muhammad Ali in the same day. I know Chael is not stranger to hyperbole, but I think this change in tone is significant. Accuse him of being rude and  disingenuous all you want, but the man is cunning. He’s smart enough to know that he’s written a check that he sure as hell can’t cash. Jones via first-round TKO.

Well everyone, That’s the Way of the World. Be sure to follow me on Twitter @dannyboydownes and make your UFC 159 predictions here. Also, don’t forget to leave your own thoughts, comments and favorite 70s funk bands on the page here.