The Downes Side: UFC 158 Predictions 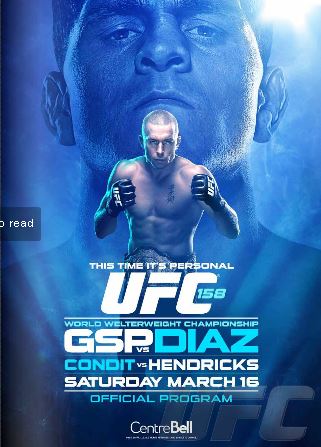 That’s right boys and girls, it’s time for the early bird edition of the Downes Side! With a little extra time on your side, this set of predictions looks to be much more exciting than even 2-4-1 appetizers at your favorite strip-mall-based casual dining restaurant.

Speaking of refined cuisine, the UFC returns to the Bell Centre in Montréal, Québec, Canada for UFC 158. The main event pits French-Canadian superstar Georges St-Pierre as he defends his welterweight title against 209 treasure Nick Diaz. The two have already put on a conference call that should be enshrined in the Smithsonian, so there’s no telling what the fight will bring. The co-main event of the evening could decide the next top contender in the 170-pound division as Carlos Condit takes on Johny Hendricks.

Mike Ricci (7-3) vs Colin Fletcher (8-2)
The main card kicks off in the lightweight division with a matchup between TUF runners-up as TUF 16's Mike “The Martian” Ricci takes on TUF Smashes' Colin “Freakshow” Fletcher. A Tristar product, Ricci cruised his way through the house to the TUF 16 finals with a solid striking game and powerful left cross. What I’ll remember most about him, though, is the hype video where he’s chatting with his girlfriend over white wine like they’re in a plug-in air freshener commercial. Colin Fletcher used his 6’2” frame, wacky hats and superb submission skills to make it to the finals of TUF Smashes. What I’ll remember most about him, though, is that time he got covered in toxic waste in Robocop.

In his official UFC debut, Ricci was completely dominated by Colton Smith’s wrestling -- but that was at 170 pounds. Fletcher may possess the grappling superiority, but he lacks the strength, size  and technique Smith used to hold Ricci down. Despite the reach disadvantage, Ricci will dictate the outside striking game and catch Fletcher with his left hand. This will be enough to drop the Englishman and earn Montreal's Martian a 2nd-round TKO on his home turf. All is not lost for "Dr. Freakshow," though. He’ll be able to resurrect his career portraying Dr. Robert Romano on ER.

Nick Ring (18-5) vs Chris Camozzi (13-1)
Next we move to middleweight division for a fight between two TUF 11 castmastes. Chris Camozzi holds the third-highest striking rate among active middleweights and wins with a combination of knees, elbows and scrappiness. In the the other corner stands Nick “The Promise” Ring. Besides reminding us of second-wave emo bands and symbols of sexual abstinence, the former professional kickboxer rebounded from his only career loss to TIm Boetsch by beating Court McGee at UFC 149.

Camozzi has won three in a row, but he’s taken a lot of damage in the process. His keys to victory have been to outlast his opponents and close things up in the third round. That strategy won’t work this time. Ring may not be able to put Camozzi away, but his all-around technical superiority will make it easy for him to win the stand up exchanges. He’ll also maintain the cardio and defensive instinct to not fall prey to a late surge. Look for Ring to take the unanimous decision win. Then, in an effort to show his commitment to the fans, he’ll change his nickname to “Wedding.” 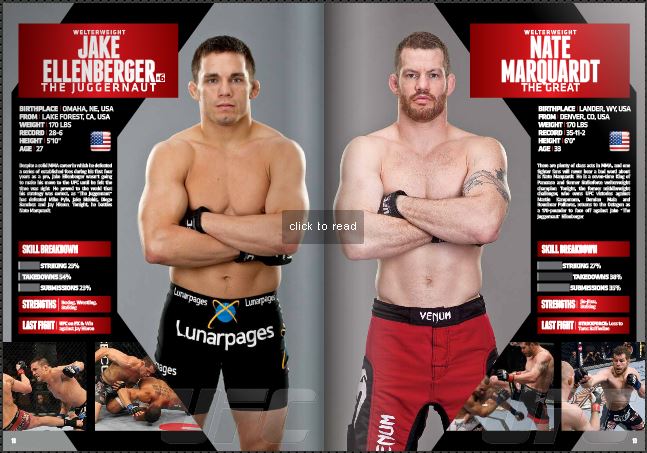 We drop down to welterweight -- where we'll be spending the rest of our fair evening -- for Jake Ellenberger vs. Nate Marquardt. After Martin Kampmann put "The Juggernaut's” six- fight win streak to an end last year, Ellenberger bounced back with decision victory over Jay Hieron in October. Known for his power punching, Ellenberger's brutal knees from the clinch can also get things done in a pinch. A former Strikeforce welterweight champion and UFC middleewight, Marquardt returns to the UFC looking to rebound from an unexpected loss to Tarec Saffiedine in January. Extremely well-rounded, Marquardt actually holds the second-highest takedown success rate in UFC history, behind GSP.

Marquardt’s lack of defense in the Saffiedine fight is certainly a cause for concern against someone with the KO power of Ellenberger, but he’ll be able to weather that initial storm. From there, his ability to push the pace will keep him strong. He’ll avoid Ellenberger’s big punches, get the tie-up and even put The Juggernaut on his back. In the third round, Ellenberger’s aggressiveness will cause him to rush in, and Marquardt will catch him the same way Kampmann did. Marquardt via 3rd-round TKO. 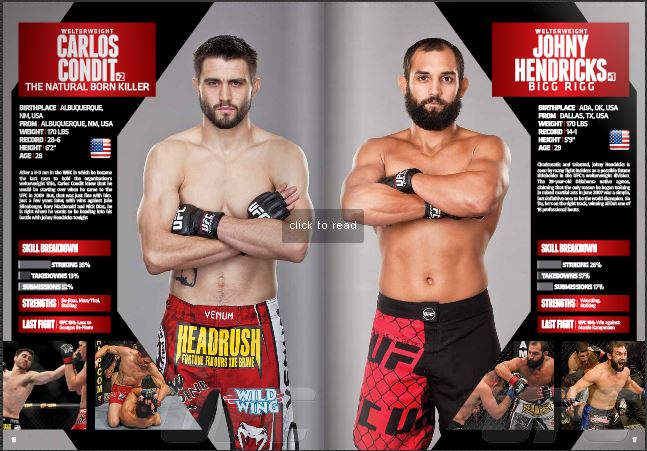 We remain at 170 for Carlos “The Natural Born Killer” Condit -- the man to last face St-Pierre -- and Johny “Bigg Rigg” Hendricks -- the man many expected would be next. Condit looks to rebound from that loss, a bout in which he gave the champ the toughest fight GSP had seen in a long while. Before that loss, Condit had rattled off a 13-1 record with 11 finishes among those wins. Winner of five in a row, Hendricks has earned the right to add superfluous g’s to his nickname with incredible knockout power. He claimed another victim when he dropped Martin Kampmann in 46 seconds at UFC 154.

There’s no denying that Hendricks' left hand is more dangerous than the food quality at the diner by my house. Greg Jackson’s strategy and Condit’s chin (he’s never been KOd), however, will act like Tums and protect him from danger. Condit’s grappling defense should be the real worry here since he’s shown a propensity for giving up takedowns to people with lesser wrestling chops than Hendricks. Having said that, Hendricks has never faced someone with as diverse a striking game as Condit. Other fighters have been content to box with him, but Condit won’t make that same mistake. He’ll use leg kicks to keep Hendricks at bay, avoid prolonged exchanges and secure the unanimous decision victory. 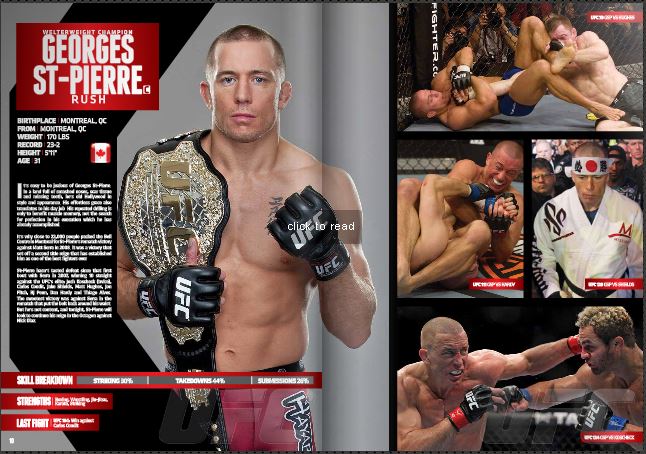 Eighteen months after it was first booked, it's time for the main event! Looking to run his win streak to 11, GSP makes his eighth consecutive title defense after a close call against Carlos Condit in his last outing. Nick Diaz returns to the Octagon for the first time in over a year when he dropped a unanimous decision in a close call against Carlos Condit. Known for his prodigious punching numbers, the Stockton native not only holds a Cesar Gracie black belt, but he may have also acquired anti-bull[expletive] super powers. 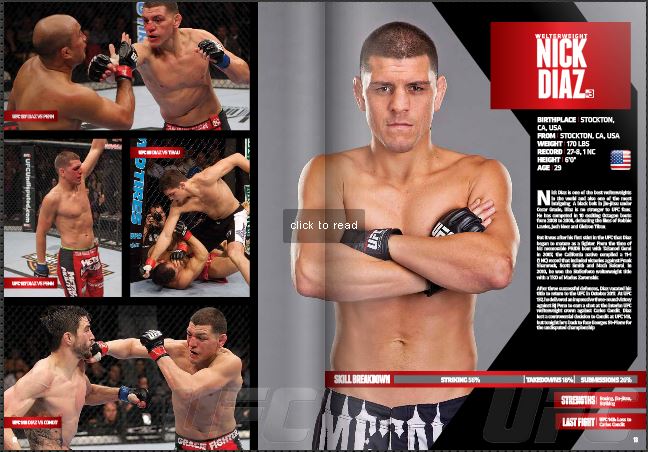 There’s no mystery about the deciding factor in this fight (it’s wrestling just in case you were wondering). Many believe that it will play out similar to Benson Henderson’s last fight against Nate Diaz, with strong stifling the volume punching. But just because the two are brothers doesn’t mean they share the same takedown defense. The Diaz elder does not possess GSP’s wrestling ability, but he is a dangerous grappler. St. Pierre will take the first two rounds, but then Diaz will start to turn the tide. In the fifth round, he’ll start teeing off on GSP, the champ will go for a desperation takedown and Diaz will lock up a choke to become your new UFC welterweight champion! You may say that I’m a dreamer (or worse), but I’m not the only one. Someday you’ll join us, and the world will live as one (at the Asparagus Festival in Stockton, which will be lifted up on the wings of its champion and no longer appear on this annual list).

That wraps up another antediluvian edition of the Downes Side! Don't forget to make your own picks in the UFC Fantasy game and after that -- if I know the internet like I think I do -- I’m sure you’ll all use this extra time to put cogent, responsible and well thought out ideas in the comments section.