The Downes Side: UFC 157 Predictions 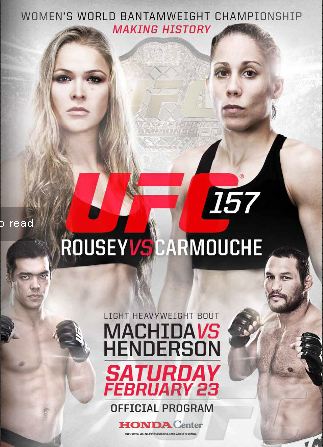 That right boys and girls, it’s time for the first-ever feminist edition of the Downes Side! Frankly it’s about time. The Feminine Mystique was written in 1963 and it’s taken 50 years to get to the point where we let women fight in a UFC cage for our entertainment.

The stage for history will be set inside the Honda Center in Anaheim, California for UFC 157. A Pay-Per-View that would make Gloria Steinem proud, the main event of the night is between Ronda Rousey and Liz Carmouche for the UFC women’s bantamweight title. The co-main event is no less important (okay, maybe a little bit less) as Dan Henderson battles Lyoto Machida for potential rights to a light heavyweight title shot.

Josh Koscheck (17-6) vs Robbie Lawler (19-9)
The main card kicks off in the welterweight division as “Ruthless” Robbie Lawler returns to the UFC for the first time since 2004 to face Josh Koscheck. A powerful southpaw with 16 KOs to his credit, Lawler looks to earn some momentum after a 3-5 stint in Strikeforce. After being sidelined with a bulging disc, Koscheck hasn’t fought since a split decision loss to Johny Hendricks in May. After such a long layoff, Kos will certainly welcome the opportunity to be ferociously booed again.

Lawler needs to keep this on the feet to have an opportunity to win. Koscheck needs to keep his mouth shut to have an opportunity to make friends. What do both of these things have in common? Neither is going to happen. Lawler has a penchant for clinching and while he’s used that tendency to hurt opponents, it’s going to give Kos the opening he needs. Once in the tie-up, Koscheck secures the takedown and gets to work. He’ll grind Lawler out in the first and second round, then take advantage of a fatigued opponent to lock in a third-round RNC.

Court McGee (14-3) vs Josh Neer (33-12-1)
We stay in the 170-lb division for Court “The Crusher” McGee and Josh “The Dentist” Neer. Winner of season 11 of The Ultimate Fighter, McGee looks to get back on track in a new division after two straight losses to Costa Philippou and Nick Ring. Grizzled veteran and top-10 MMA nickname holder (avoiding random noun alliteration automatically qualifies you) Josh Neer rides a two- fight losing streak of his own.

Both fighters have similar streaks, but the manners in which they lost have been quite different. McGee’s fights have gone to the judges' scorecards, while Neer holds two first-round KO defeats. McGee has the ability to outlast his opponents and push the pace, even into the final round. Neer doesn’t raise the same sort of confidence. Plus McGee’s chin (or is it his beard?) helps him weather the first-round onslaught. His conditioning, clinching and wrestling will wear out his opponent and he’ll take the decision with 29-28 across the board. At 29 years old, Neer still has time to go back to school and earn that DDS. I just hope he’s saved enough to avoid the worst adversary of all -- student loans.

Urijah Faber (26-6) vs Ivan Menjivar (25-9)
We drop down to the bantamweights for a contest between Urijah Faber and Ivan Menjivar. Always the bridesmaid and never the bride, "The California Kid" is on a roll -- in all non-title fights -- with his ability to close the distance and finish the fight on the ground. Extremely aggressive, Menjivar has earned fans all over the world with his tendency to stand in the pocket and push the pace. After a disappointing performance against Mike Easton, Menjivar finished Azamat Gashimov (which may or may not be the name of a Bond villain) with a first-round armbar at UFC 154.

Menjivar has the highest striking rate in the division. Normally I tend to favor volume strikers against wrestling-based fighters like Faber. I also normally don’t eat at places that get shut down by the health examiner. You know what? Life’s about switching things up. Faber will use that big right hand to close the distance and bring Menjivar down to the mat. Menjivar certainly is dangerous off his back, but I don’t see him being able to lock one in against the California Kid. Faber holds top position for the majority of the fight and wins by unanimous decision. He’ll feel great and so will I...hopefully.

Lyoto Machida (18-3) vs Dan Henderson (29-8)
A lot of times the co-main event of a show is merely the second-to-last thing to happen. In this case, though, it’s something truly special. In one corner stands Lyoto “The Dragon” Machida. Former champion and most entertaining karate practitioner since Rocky Douglas, he’s coming off a second-round starching of Ryan Bader in August. In the opposite stands another former champion, Dan Henderson. Winner of four in a row, he competes for the first time since beating Shogun Rua in a five-round "Fight of the Century" by decision at UFC 139 in November.

Hendo’s right hand can change the scope of a fight in an instant. His strong wrestling and takedowns have grounded some of the greatest fighters in MMA history, too. Unfortunately, for those things to work, your opponent needs to be in front of you. Machida’s accuracy and footwork will save him from the appendage that still causes Michael Bisping to wake up with cold sweats. After avoiding Hendo’s haymaker, Machida will effectively counter and hand the former PRIDE and Strikeforce king his first KO loss. Think that’s impossible? Well you clearly have never seen Lyoto Machida Out for a Kill.

Ronda Rousey (6-0) vs Liz Carmouche (8-2)
In the main event, we shall witness history in the making as “Rowdy” Ronda Rousey fights Liz “Girl-rilla” Carmouche in the first-ever women’s MMA bout in UFC history. Everyone knows Rousey’s story: Undefeated in six professional fights, she has won all of them in the first round via armbar. Challenger (and maybe Urijah Faber’s long-lost sister) Carmouche looks to get of takedown of her own so she can use the ground-and-pound techniques that vaulted her to this position.

Remember that meteorite that struck Russia recently? That’s going to pale in comparison to the sound inside the arena when Liz Carmouche shocks the world. Rousey has only shown us one move. It’s a hell of a move and it’s gotten her this far, but you can only make a career of one thing for so long (Larry the Cable Guy excluded, of course). Carmouche defends the takedown and makes this a standing affair. This will bring Rousey into uncharted waters, where the Girlrilla has tread before. Carmouche gets top position on a frustrated Rousey and takes the belt with a 3rd round TKO.

That wraps up our gender-inclusive edition of the Downes Side. Be sure to follow me on Twitter @dannyboydownes. Also, don’t forget to leave your own thoughts, Fantasy picks, comments or favorite Mary Wollstonecraft work here, too.