The Downes Side: UFC 156 Predictions

That’s right boys and girls, it’s time for another exceptional edition of the Downes Side. I’d like to regale you with the exploits of last weeks event in Chicago, but let’s be honest, you don’t care.

What you do care about, however, is that the UFC is back in Las Vegas for UFC 156 inside the Mandalay Bay Events Center. The main event of the evening puts the featherweight title on the line as champion Jose Aldo seeks to make the former lightweight belt holder Frankie Edgar’s 145-pound debut an unfortunate one. The co-main event of the night features a pair of light heavyweight superstars as The Ultimate Fighter Season 2 winner and former 205-pound champ Rashad Evans looks to begin another title run against Antonio Rogerio "Lil Nog" Nogueira. 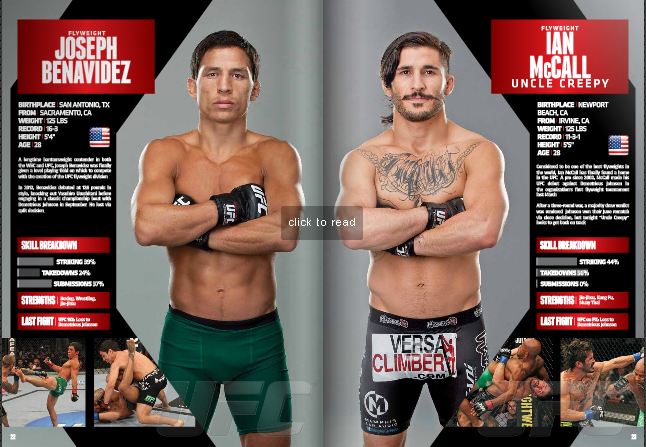 Joseph Benavidez (16-3) vs Ian McCall (11-3-1)
The night kicks off in the flyweight division with Joseph Benavidez taking on Ian “Uncle Creepy” McCall. The favorite to win the flyweight tournament, Benavidez lost the finals in a split decision to current champion Demetrious Johnson at UFC 152. Training out of Team Alpha Male, the “Joe-jitsu” master is known for his guillotine chokes and holds eight career submission finishes. Extremely well-rounded, McCall’s two career UFC fights have both been against Demetrious Johnson. After falling prey to an arithmetically-challenged Australian judge in March, McCall dropped the rematch to “Mighty Mouse” last June.

In their short stint in the UFC, the 125-pound fighters have taught us two key things. Firstly, despite what Randy Newman says, you should never pick on short people. Secondly (and more importantly), the elite members of the division are evenly matched, and the same holds true for this fight. When you have evenly-matched opponents, the difference comes down to conditioning and work rate. Using those ciriteria, Benavidez has the advantage. He’ll be able to beat McCall to the punch early on, and by the time the third round comes around, he’ll secure the takedown and ground Uncle Creepy to get the unanimous decision victory.

Jon Fitch (24-4-1) vs Demian Maia (17-4)
We jump up to the welterweight division for a clash of elite grapplers as AKA’s Jon Fitch faces BJJ black belt Demian Maia. 14-2-1 in his UFC career, Jon Fitch has used his dominant wrestling to smother opponents like Thiago Alves, Mike Pierce and (most recently) Erick Silva. A former middleweight number-one contender, Demian Maia has rejuvenated his career since dropping down to 170 with finishes of Dong Hyun Kim and Rick Story.

Fighting Jon Fitch is like battling a horror movie monster: You can run as much as you want, but eventually he’ll grab you, take you down and grind you to a decision victory. Ok, sure it’s not the scariest monster, but it’s still more believable than Gary Busey. Maia’s improved striking will give Fitch some problems in the beginning, but Maia doesn’t possess the same power in his left hand as Johny Hendricks. Fitch hasn’t been submitted since his pro debut in 2002, so he’ll avoid Maia’s dangerous guard and secure the UD win. It won’t be the best horror movie death, but still better than Death by Umbrella. 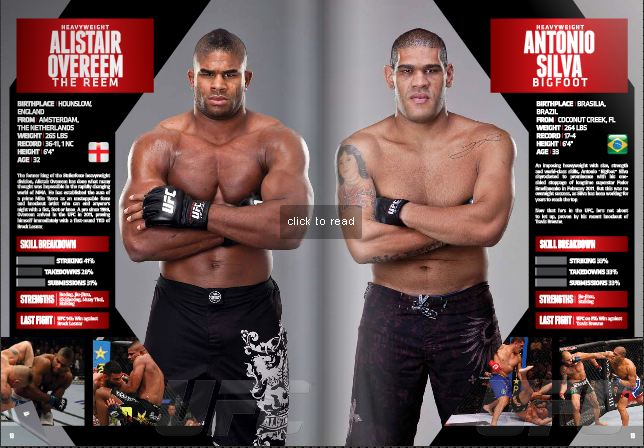 Alistair Overeem (36-11) vs Antonio Silva (17-4)
Next we head to the heavyweight division for Alistair Overeem and Antonio “Bigfoot” Silva. Elite kickboxer and action figure personified, Overeem has a gone the distance only five times in his professional MMA career. Known for his KOs, he actually holds 19 career submission victories. The majority of those subs are by guillotine, and I was actually able to find some footage of it here. A powerhouse in his own right, Silva holds 12 first round finishes, the most recent in October against surging star Travis Browne.

Alistair Overeem is a polarizing figure. Some hate him, while others are already poised to crown him the next heavyweight champion. Personally, I don’t care as long as I get to make horse meat jokes. Regardless of how you feel, you can’t deny the man’s talents. He’ll walk into the Octagon, drop Silva and proceed to open Bigfoot up worse than Cain Velasquez did at UFC 146. The Demolition Man takes the first-round TKO and the number one contender spot.

Rashad Evans (17-2-1) vs Antonio Rogerio Nogueira (20-5)
Dropping to the light heavyweight division, Rashad Evans prepares himself for another title shot. Standing in his way will be PRIDE legend and Wonder Twin, Antonio Rogerio Nogueira. Holder of the second most wins in UFC light heavyweight history, Evans looks to rebound from a loss to Jon Jones in April. After dropping decisions to Phil Davis and Ryan Bader, “Lil Nog” hasn’t fought since disposing of Tito Ortiz in the first round back in December 2011. 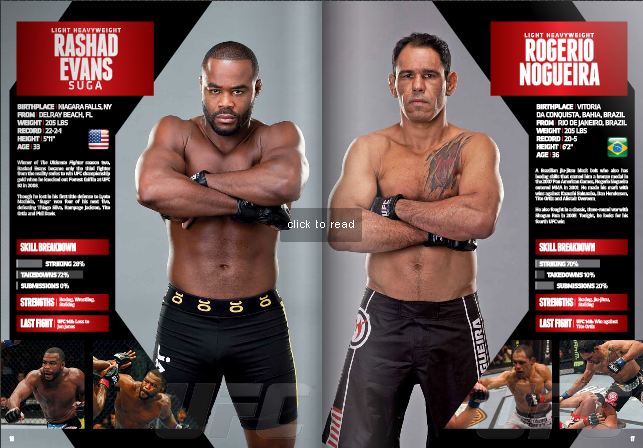 Despite a takedown defense rate of over 70%, Nogueira’s losses to Davis and Bader have shown that he can be outwrestled. Evans will secure a couple of takedowns early, and while he won’t finish, it will cause Nogueira to be less aggressive on the feet. This will play into Rashad’s advantage and open up his boxing game. In the third round, he’ll finally drop Rogerio and earn the TKO win.

Jose Aldo (21-1) vs Frankie Edgar (15-3-1)
Time for the main event of the evening! The challenger, Frankie Edgar, has made a career of proving people wrong. He tried out for the first season of TUF but didn't make the final cut... and soon after, got a call asking him to take a fight in the Octagon. After hearing people tell him to drop to featherweight for years, Edgar became the 155-pound champion... and then dropped to featherweight. The champion, Jose Aldo, is 11-0 in his WEC/UFC career. By all objective accounts the most dominant fighter in 145-pound history, Aldo’s last title defense was just over a year ago when he dropped Chad Mendes with a well-timed knee at the tail end of the first round.

Despite a renowned career, Edgar is still the biggest underdog since Seabiscuit competed in the All Valley Karate Tournament with his Jamaican bobsled team. Despite making a career of proving people wrong, it’s not going to continue tonight. Edgar used his speed advantage at lightweight to attack opponents at angles and keep them guessing with a blend of strikes and takedowns. Unfortunately, this advantage disappears against Aldo. Couple that with the fact that "Scarface" has stuffed 52 of 55 takedowns, things don’t look good for New Jersey’s second-favorite son (Springsteen forever, bro). Benson Henderson used leg kicks to beat Edgar twice, and despite how questionable you may find those decisions, Aldo will do the same. After beating up his legs, Aldo will catch Frankie with a right hand and put it away in the third round.

That wraps up another cromulent edition of the Downes Side. Be sure to follow me on Twitter @dannyboydownes. Also, be sure to make your own predictions in the new UFC Fantasy game, then leave your thoughts, concerns, and neologisms on the page here.