The Downes Side: UFC 143 Predictions 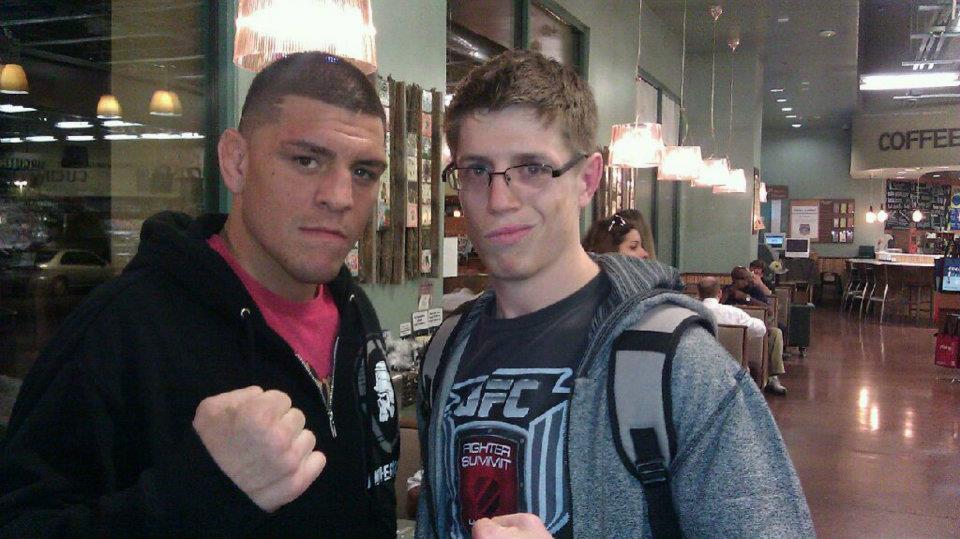 It's been a good week for The Downes Side: I went 5-0 with my FOX picks bringing me to 9 wins in a row. My Chicago homecoming went off almost flawlessly (save a lowlight in which an entire family of four flipped me off on my way to the arena). That's my biggest victory streak since I won the Vocabulary Bee in Mrs. Florian’s 6th grade classroom 11 weeks in a row.

I’ll get another shot at glory this week as the UFC rolls into Las Vegas' Mandalay Bay for UFC 143. The main event is my fellow wordsmith Nick Diaz facing Carlos Condit for the interim welterweight title.

Ed Herman vs Clifford Starks
Ed "Short Fuse" Herman has looked great coming off a nearly two-year layoff from a knee injury with quick wins over Tim Credeur and Kyle Noke. Clifford Starks is another example of the old adage, “Only two things come from Arizona State: drunk college girls and UFC wrestlers.” He made his debut last October with a weigh-in wardrobe malfunction followed by a decision win.

Prediction: Starks is a great wrestler, but Herman's superior striking and submission games will be too much for him. Starks has the potential to grind out a decision, but I’m sticking with the ginger. When you don’t have a soul, you have nothing to lose, and Herman takes this middleweight melee by 2nd round TKO.

Renan Barao vs Scott Jorgenson
Next we have Renan Barao pitted against Scotty “Young Guns” Jorgensen to determine who'll be at the top of the bantamweight heap in the post-Cruz/Faber 3 universe. Jorgensen is searching for another shot while Barao wants to increase his unbeaten streak to 30 straight (showoff).

Prediction: This is my favorite for Fight of the Night. While Barao has the speed advantage, Young Guns’ strength and wrestling can neutralize that. Expect a wild back-and-forth fight with Jorgensen’s grappling taking over as the fight progresses. Scotty will get his takedowns, ground and pound and put on the second best show of the weekend (the first obviously being Puppy Bowl VIII).

Josh Koscheck vs Mike Pierce
In the main card's first welterweight war, irrepressible instigator Josh Koscheck faces off against Mike Pierce, who got the fight by publicly calling out Kos. Both fighters are coming off recent wins and have solid wrestling backgrounds. Koscheck is looking to get back into the welterweight title talk while Pierce gets a taste of the spotlight with a high-profile opponent.

Prediction: Despite being a former Division I wrestler, Pierce has struggled against other wrestlers whose first names start with J (see his fights against Jon Fitch and Johny Hendricks). Pierce has never been stopped, but that streak ends tonight. Koscheck will go for the takedown immediately, get position and go HAM. He’ll look great, then ruin all the goodwill he earned with a solid black-hat performance in the post-fight interview. Koscheck wins via first-round TKO

Roy Nelson vs Fabricio Werdum
After his Strikeforce sojourn, Fedor-beater Fabricio Werdum returns to the UFC with a heavyweight showdown against Roy “Big Country” Nelson. As for Nelson, after two disappointing losses to Junior Dos Santos and Frank Mir that made Big Country reexamine his lovable pudginess, he rebounded with a win against Mirko Cro Cop.

Prediction: Big Country may not be as fat and lovable as he used to, but losing weight hasn’t
slowed down Seth Rogen’s career and it won’t hurt our favorite mulleted
heavyweight, either. Werdum wants this fight to go to the ground, but Roy has the striking ability to keep him on the outside. Big Country keeps the distance and nickel-and-dimes Werdum to a decision win.

Nick Diaz vs Carlos Condit
The main event features everyone’s favorite anti-social fighter against a guy who's surprisingly mild-mannered for being a “Natural Born Killer.” Full disclosure: Nick Diaz is a friend of mine. And by friend, I mean that I once saw him in a Whole Foods in Las Vegas and talked to him for five minutes. But he didn’t call me a punk-ass bitch and we both use the same salad dressing so it’s clear that we’re very much alike.

Prediction: Condit has the wrestling advantage, but I imagine these two will stand toe to toe with one another. Condit says that he plans on testing Diaz’ chin, and that’s usually a recipe for disaster (see Diaz vs. Daley, Diaz vs. Lawler, etc). The 209 will outwork the NBK - Diaz wins the decision after five rounds and becomes the number-one source of pride for Stockton. Take that, Asparagus Festival!

Sadly, that brings an end to this edition of the Downes Side. If you can’t get enough of me, follow me on Twitter @dannyboydownes and add some comments and I’ll respond. Now if you’ll excuse me, I have to go place my bets for the game. For what it’s worth, my money is on Leroy Brown.

Check out Danny's previous predictions for UFC on Fox.