The Downes Side: TUF Nations Predictions 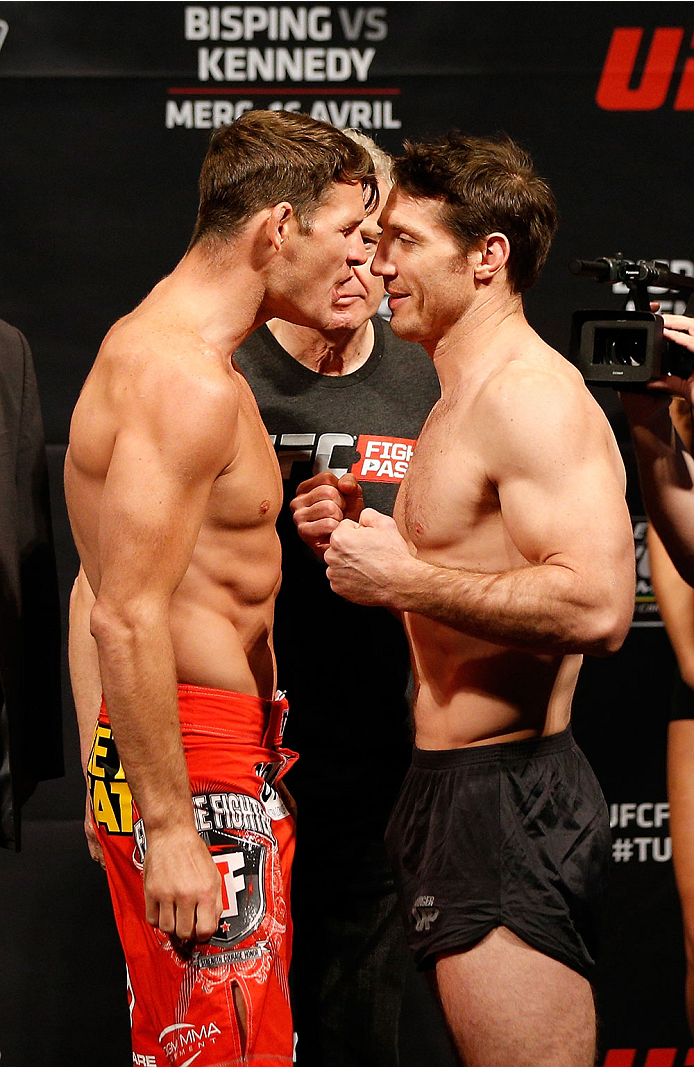 That’s right boys and girls, it’s time for another TUF edition of the Downes Side! Initially, there was some miscommunication with my editor and I wrote a densely worded essay concerning Transports Urbains Français. I was then told such work was “completely useless,” and decided to work on The Ultimate Fighter finale.

It may not have the sex appeal of 21st century mass transit, but these Wednesday night fights will be sure to reach their entertainment destination. We have an all-Canadian finals, as the Canucks ran through Team Australia this season. After crowning a middleweight and welterweight champion, we’ll see if Kyle Noke can help the Aussies save face as he fights opposing coach Patrick Cote. In the main event of the evening, middleweights Michael Bisping and Tim Kennedy can move themselves even closer to title contention with a win.

The main card begins with featherweights Dustin Poirier and Akira Corassani. After two straight wins over Erik Koch and Diego Brandao, Dustin “The Diamond” Poirier tries to maintain his position as one of the elite 145-pound fighters in the UFC. Dangerous everywhere, he’s finished 12 opponents, with an even split between submissions and TKOs. A TUF 14 alum and Taekwondo black belt, Corassani prefers to keep the fight on the feet and blitz his opponents with combination strikes.

Corassani’s best chance for success is on the feet. He’ll have to use his strong footwork and head movement to avoid the takedown. He’s also very good at lulling his opponents into a sense of security and then putting them on their heels with a well-timed flurry. He’s making a big jump in taking on the #6 ranked Poirier, and he should be commended for that. Sometimes when you throw someone into the deep end, nothing happens and they learn how to swim. Other times, though, your mom yells at you for “trying to kill” your little brother and you have to give a statement to the police. Since his loss to Cub Swanson, Poirier has been on fire and he’s not going to slow down. Corassani doesn’t have one-punch knockout power and Poirier is too slick to be out-struck for 15 minutes. Corassani will rush in with a right hand, Poirier slips and finishes the takedown. From there he’ll advance position and finish the rear naked choke in the first round.

We move to the first TUF championship fight between Chad “The Disciple” Laprise and Olvier Aubin-Mercier. Laprise had the most devastating knockout of the season when he shattered teammate Kajan Johnson’s jaw in three places in the semifinals. He’s very good at counter punching and avoids absorbing damage. Dubbed by some on his team as “The Next GSP,” Quebec native Olivier Aubin-Mercier combines his judo background with impressive submission skills. All five of his career wins have come by rear naked choke in the first round.

Whether on the practice mat or in the Octagon, nobody on this season had an answer for Aubin-Mercier’s grappling. His game plan had no surprises, but no one could find the answer. He does have a lot of holes in his striking defense, however. He’s particularly susceptible to overhand rights, and Laprise possesses definite KO power. Laprise needs some time to get into a striking groove though, but don’t expect Aubin-Mercier to let that happen. Unlike his attempt to get the nickname “The Quebecois Kid” to stick, Aubin-Mercier will be all over Laprise and earn the tapout via RNC in the first round. Seriously, the Quebecois Kid? When I hear that I just think of a French Canadian version of Dennis the Menace.

We keep the Canadian on Canadian violence going as we move to crown this season’s  middleweight champion. After surviving an injury-riddled season, Sheldon Westcott didn’t have any difficulties cruising to the finals. He comes hard out of the gate and his aggression earned several first round finishes. He even pulled off his own version of a modified Von Flue choke to earn his place in the finals. Elias Theodorou is a grinder that wore down all his opponents with solid wrestling and top control. “The Spartan” also can wear down your patience with constant references to his “modeling” career and the fact that he still thinks it’s cool to reference the movie 300.

Westcott may not overwhelm Theodorou like his other opponents up to this point, but he should be able to keep Canada’s MMA model on his heels. Theodorou has the more technically sound striking game, so he could be able to connect as Westcott rushes inside. Theodorou’s conditioning is excellent, but he prefers to go at a more steady pace. As long as Sheldon avoids running into strikes with reckless abandon, he’ll clinch up and finish the takedown. Theodorou does have excellent top position, but he does seem a bit unsure on his back. Whereas King Leonidas lost the battle, but won the war (SPOILER!), Theodorou does the opposite. Westcott by unanimous decision.

We drop back down to welterweight for the battle between coaches Patrick Cote and Kyle Noke. A former middleweight #1 contender, Cote made a successful debut at 170 pounds with a decision win over Bobby Voelker. A powerful striker with eight career KOs, “The Predator” feels most comfortable when he can let his hands fly. A Team Jackson/Winkeljohn product by way of Australia, Noke bounced back from a two fight losing streak with a 45 second TKO over Charlie Brenneman at UFC 152. A subsequent shoulder injury sidelined him, and this will be his first UFC appearance since September 2012.

If Cote is allowed to walk into range and start teeing off, it could be a long night for the Aussie. Noke does have a wider repertoire of attacks at his disposal, so he should keep distance with his kicks. Expect Cote to continue to move forward and find a home for his right hand. Like most people, Noke will get tired of that fairly quickly and shoot in for the takedown. Cote defends takedowns at a less than 50% rating, so expect a few of them to be successful. This process repeats for three rounds, and Noke picks up the decision victory.

Time for the main event! Coming off successful detached retina surgery, Michael “The Count” Bisping tries to make one last run at the middleweight title. Not only does he own the highest striking rate in the division, he’s the best British wrestler since Davey Boy Smith. Kennedy is undefeated since coming over from Strikeforce, and he’s only absorbed 27 strikes in his last two fights. If you got sick of all that respect and civility between Noke and Cote, you won’t have to worry about that here.

Kennedy will try to take Bisping down, but the Englishman is extremely difficult to hold down. The Count was able to hold his own against Chael Sonnen, and as talented as Kennedy is, he’s doesn’t have Sonnen-caliber wrestling. Even though he won’t be able to work his submissions, expect Kennedy to win this on the feet. Bisping likes to stick and move. He throws a lot of punches, but doesn’t have a lot of power behind them. It’s served him well in the past, but Kennedy’s speed can close the gaps. The big X factor is conditioning. This is a five round fight, and Kennedy’s athleticism advantage will decrease over time. Bisping will finish strong, but it will be too late. Kennedy by decision.

That wraps up another high speed edition of the Downes Side. Follow me on Twitter @dannyboydownes. Also, don’t forget to leave your own predictions, comments and favorite public transportation system on the page here. It’s hard to go wrong with the Philippines. They have jeepneys.