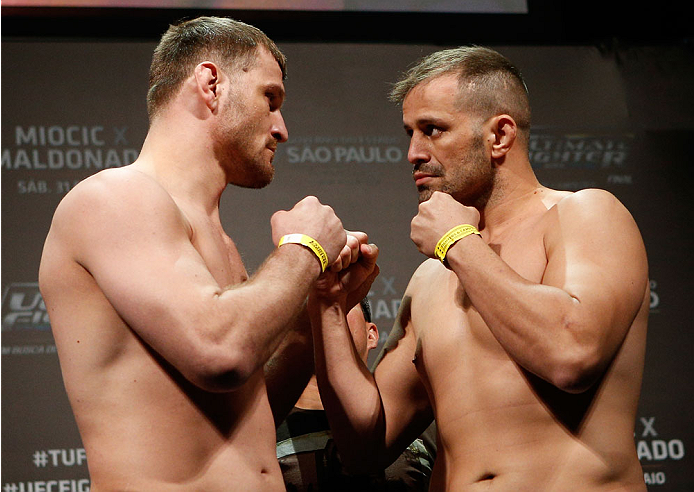 Double the pleasure, double the fun. Double your education with a double dose of the Downes Side! That’s right boys and girls, the UFC is doing double duty this weekend and so is the Nostradamus of MMA. Unlike Doublemint gum, however, my flavor remains with you much longer than five minutes.

Whether you like Big Red, Hubba Bubba or Juicy Fruit, there’s something for every pugilistic palate as the UFC returns to Brazil for a Fight Night in Sao Paulo. The main event of the night showcases heavyweight hitters Fabio Maldonado and Stipe Miocic. In the co-main events of the night, we’ll crown two champions of The Ultimate Fighter Brazil. Vitor Miranda and Antonio Carlos Junior square off in the heavyweight division, while middleweights Marcio Alexandre and Warlley Alves compete. Much like Roddy Piper, all these fighters have come to chew bubblegum and kick ass. [Update: the fighters are all out of bubblegum.]

We open the main card in the featherweight division with Rony Jason and Robbie Peralta. After suffering the first loss of his UFC career at the hands of Jeremy Stephens, Jason came back with a blistering first round KO of Steven Siler in March. A hard hitter with a penchant for brawling, he holds five career KO victories and eight via submission. Another knockout artist, Robbie “Problems” Peralta’s attack primarily comes from his boxing.

When two guys like this step into the Octagon, there’s no real way to determine how things will play out. Both fighters have the potential to end things with a single punch, but they also leave a lot defensive gaps. Having said that, Jason has more tools in his box. He also has the speed advantage. It will be a hectic pace with limbs flying all over the place, but Jason beats Peralta to the punch, takes it to the mat and wins by TKO in the first.

We move to welterweight for Demian Maia and Alexander “Bad Boy” Yakovlev. Struggles against Jake Shields and Rory McDonald may have dropped Demian Maia out of the immediate title race, but the jiu-jitsu ace always poses a threat. Alexander Yakovlev may bring back fond memories of Yakov Smirnoff, but this 29-year-old Russian has the potential to make quite the UFC debut. He does a good job of striking at distance, can close the distance very quickly and attack from the clinch.

I understand the temptation in choosing a bad boy. I mean, that’s why Princess Leia ended up with Han Solo instead of that crybaby Luke Skywalker. Yakovlev has the ability and experience to hang in the UFC, but his offensive abilities are still in the grappling department, and they aren’t on Maia’s level. Maia has been smothered by powerful wrestlers, but Yakovlev doesn’t possess those traits. He may be able to rebuff Maia in the first round, but the talent gap becomes more obvious the later the fight progresses. Maia by submission in the second.

That brings us to the first TUF finale between former teammates on the show, Marcio Alexandre and Warlley Alves. Nicknamed “Lyoto” for his karate-based striking style, Alexandre worked his way to the finals with a couple of hard-fought decisions. One of the more promising fighters on the show, Coach Chael Sonnen couldn’t say enough nice things about Warlley Alves. An athletic striker with knockout power, Warlley also showed off a vicious guillotine choke in his semifinal fight against Wagner Silva.

He may have earned his nickname from Lyoto Machida, but Alexandre does not have the same finishing power as the former light heavyweight champion. He was able to land with a lot of accuracy on the show, but opponents were also able to counter him effectively. Against Alves that’s a recipe for disaster. His pace and power will be too much for Alexandre to handle. “Lyoto” does his best work when he has time and space, and Alves will provide none of that as he blitzes his way to the first round knockout win.

We jump up to the heavyweight division for the second TUF finale. Not only will the fight itself be interesting, but we have quite the battle of nicknames as Vitor “Lex Luthor” Miranda fights Antonio Carlos Junior aka “Cara de Sapato” aka “Shoe Face.” A striker that cruised to the finals with TKO wins over Antonio Branjao and Richardson Moreira, Miranda has no desire to bring this fight to the ground. The reason for that is because our friend Shoe Face is a Brazilian Jiu-Jitsu black belt who holds a number of grappling titles.

Due to their dominance en route to the finals, it’s hard to really gauge how “weak” their relative weaknesses are. Junior seemed capable on his feet, but didn’t face that much resistance. Miranda also found opponents that were willing to trade with him so his grappling never came into play. The big question here is, “Can Junior get it to the ground?” If only his wrestling were as distinguished as his chin. Junior will try to get the takedown from the clinch, but he won’t have enough power to accomplish it. Miranda’s power advantage will serve him well as he strikes his way to the unanimous decision victory.

Time for the main event! After losing to Stefan Struve, Stipe Miocic has come back with wins over Roy Nelson and Gabriel Gonzaga. A former Division I wrestler and Golden Gloves champion, Miocic’s performance needs to prove he belongs in the upper echelon of the division. Stepping in on short notice for Junior Dos Santos, Fabio Maldonado moves to heavyweight after three straight wins at light heavyweight. A boxer that likes to attack the body, this iron-chinned fighter refuses to back down from a fight.

Maldonado is certainly susceptible to the takedown. Will Miocic want to take him down, though? The low hanging fruit principle may work in economics, but fighters apply microeconomic principles the same way John Maynard Keynes applies a gogoplata -- not very well. Even if Miocic gives into temptation and goes punch-for-punch with Maldonado, you still have to like his chances. Maldonado usually wins a war of attrition, but it won’t come to that. Miocic wins by knockout in the first.

That wraps up another Downes Side that certainly gave all of you something to chew on. Follow me on Twitter @dannyboydownes. Also, don’t forget to leave your own prognostications, queries, conjecture or favorite brand of gum on the page here. The child in me wants to say Big League Chew, but my adult side says, “Choose Bubbalicious Lightning Lemonade!” Now that I think of it, I better go look into a dental plan.