The Downes Side: TUF 18 Finale 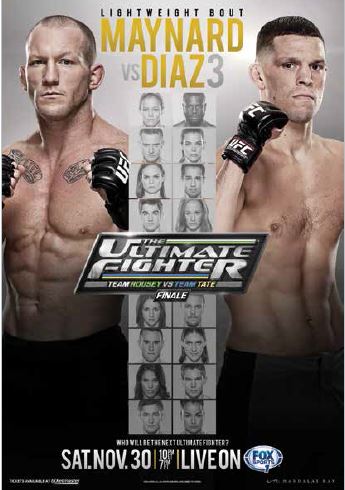 That’s right boys and girls, it’s time for another edition of The Ultimate Predictions (TUP to those in the know) aka the Downes Side! As Americans are still recovering from Thanksgiving food comas, rest assured that the Nostradamus of MMA has an insatiable appetite to deliver the best prognostications on the internet (well, that and mashed potatoes).

Promising a bountiful feast of its own, the UFC is back at the Mandalay Bay Events for The Ultimate Fighter 18 Finale. The main event of night pits the sometimes starchy Nate Diaz against Gray Maynard. Former number-one contenders, both are looking to rebound from recent setbacks. Plus, a whole crop of season 18 bantamweights look to make an impression in the UFC. In the first TUF final, BJJ black belt Chris Holdsworth tries to continue his streak of dominance against British powerhouse David Grant. We’ll also crown the first women’s TUF champion as Julianna Pena and Jessica Rakoczy square off. Whether you like dark meat or white, we all like free fights. 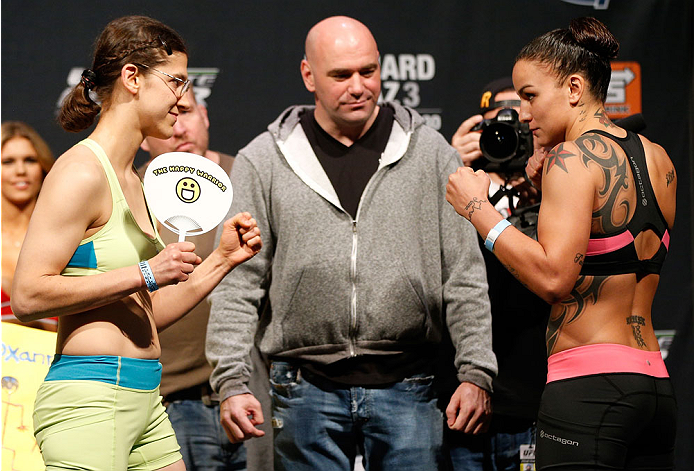 The main card opens up in the women’s bantamweight division with Raquel Pennington and Roxanne Modafferi. After brutalizing Jessamyn Duke in preliminaries, Pennington completely froze in her semifinal fight against Jessica Rakoczy. One of Dana White’s early favorites, Pennington’s boxing is her strongest attribute. A veteran of WMMA for over a decade, “The Happy Warrior” Roxanne Modafferi struggled in her preliminary fight against Rakoczy and lost via knockout. A grappler first and foremost, Modafferi has that strange charisma that only comes from a sci-fi/fantasy aficionado who resembles a librarian.

Fresh off Thanksgiving, it would seem appropriate that a “pioneer” should pick up the victory, but I don’t see that happening. As long as Pennington doesn’t let the pressure get to her, she should win this easily. Despite all her experience, Roxanne’s stand-up lacks finesse and power. Even if the fight hits the ground, Modafferi doesn’t have the athleticism to hold Pennington down. Expect "Rocky" to bully Roxy with her strength, connect on her power punches and take the TKO in the first round. 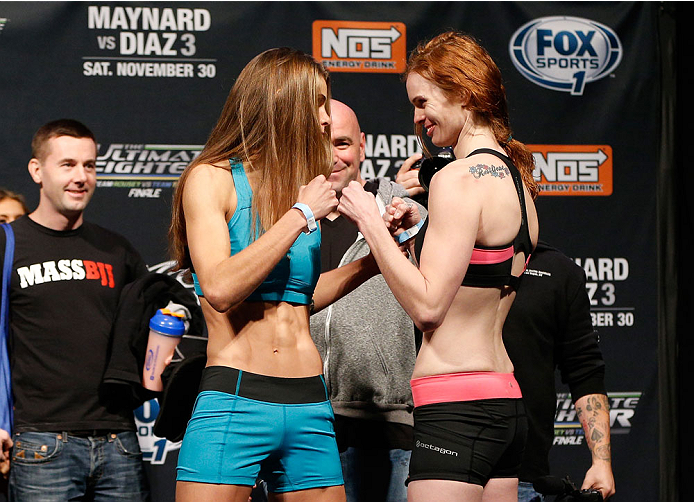 We stay in the women’s division for Peggy Morgan and Jessamyn Duke. Dubbed by Miesha Tate as “The biggest 135-pounder I’ve ever seen,” 6'1" Peggy Morgan uses her size to her advantage with ruthless ground and pound technique. A literary professor from New Hampshire, it’s hard to imagine why someone would rather fight in a cage than lecture about James Joyce. A Muay Thai fighter and former model standing 5'11" herself, Jessamyn Duke spent the majority of the season modeling a pair of black eyes.

Morgan has the distinct power and grammar advantage, but all the predicate nominative and gerundive knowledge in the world can’t save you inside the Octagon (we live in such an unfair world). Morgan is tough, but she gets sloppy. Duke may have lost her fight against Raquel Pennington, but she showed resilience and a much more well-rounded striking game than her opponent. Expect Duke to keep the “Daywalker” at the end of her reach with jabs and low kicks. Morgan will try to bull rush, but Duke’s superior clinch game should protect her from the takedown. By the time the third round comes around, Morgan will tire out quicker than Jonathan Franzen’s prose and Duke connects with a big knee. Duke via TKO in 3rd. 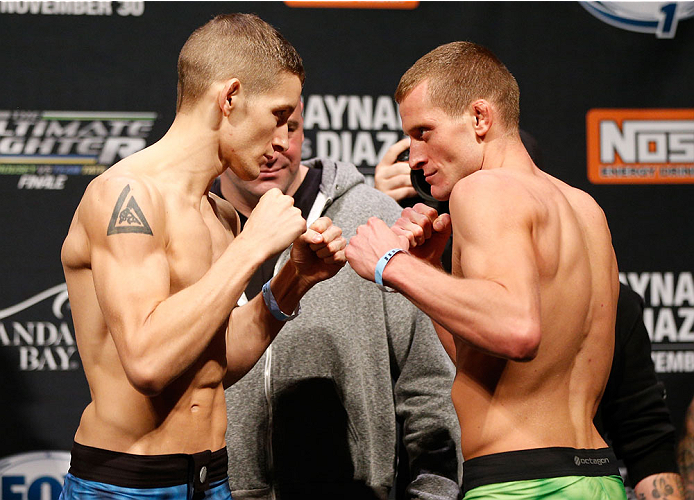 That leads us to the men’s final. A former English DJ, “Dangerous” David Grant submitted Louis Fisette in his first-round fight and then received a pass to the finale when Anthony Gutierrez failed to make weight. Well versed in a number of disciplines, his right hand can change the course of a fight with one punch. A Brazilian jiu-jitsu black belt and Team Alpha Male product, Chris Holdsworth has been the odds-on favorite since the beginning of the show. While his wrestling and jiu jitsu skills have impressed many, he really has a long way to go in the nickname development department. Seriously, “Holds It Down” Holdsworth? I don’t even know if Bruce Buffer can pull that introduction off.

Holdsworth may have been the man to beat the entire season, but he did show some vulnerability. He’s excellent from top position, but his ability greatly diminishes when roles are reversed. Having said that, Grant never showcased the wrestling necessary to plant opponents on their back and hold it down (wow, even in a sentence it just doesn’t seem right). Grant should be able to fend off the takedowns initially, but Holdsworth’s conditioning and relentlessness will eventually bring the fight to the mat. From there, he’ll advance position, find an opening and exploit it. Team Tate's Holdworth becomes the season 18 winner with a rear-naked choke in the second round. 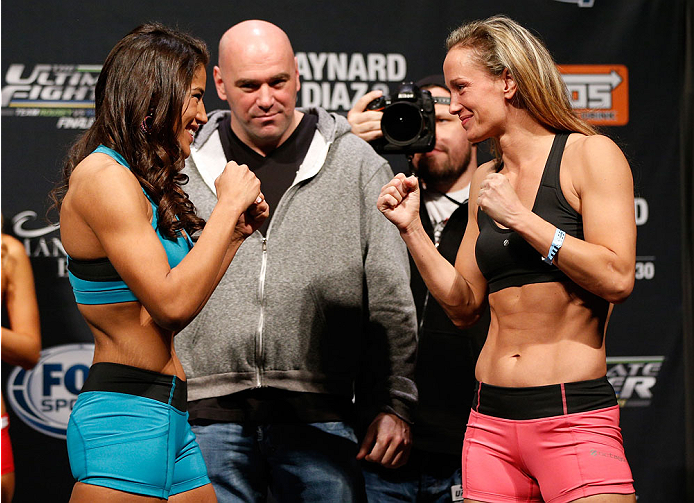 From there we move on to decide the first-ever female TUF champion. One of Coach Tate’s closest friends, Julianna Pena smashed through the competition with her wild, aggressive fight style. The only thing more impressive than her talent was her ability to alienate people in the house. You’d think that speaking in fake accents and disrupting people’s sleep with a blow dryer would endear you to others, but as we’ve already discussed -- life just isn’t fair. A former champion boxer, Jessica Rakoczy battled a nagging shoulder injury the entire season, but it didn’t prevent her from showing the best hands (male or female) on the show.

In a battle between technique and raw aggression, technique often wins. This isn’t one of those cases, however. Pena’s abilities are still very raw, but she has a high ceiling. She can be reckless, but Rakoczy doesn’t have the one-punch power to make her pay for it. Pena might have a hard time getting inside Rakoczy’s jab in the opening minute, but she’ll eventually find her mark. Once she drops Rakoczy, she’ll waste no time transitioning to the takedown and secure the first-round TKO. With Miesha Tate earning the TUF sweep, I think I can predict how Ronda will react. 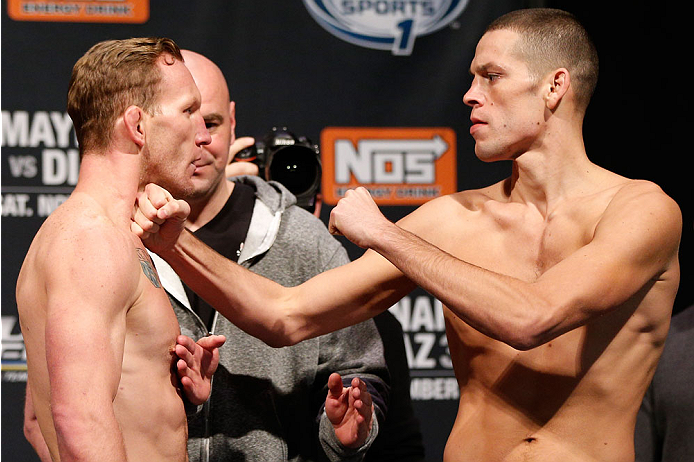 Time for the main event of the evening! After failing to capture the lightweight title on two separate occasions, Gray Maynard headed to the end of the line. His second quest started off well with a win against Clay Guida, but TJ Grant dashed those hopes with a first-round TKO in May. After losing a title shot of his own to Benson Henderson, Nate Diaz was knocked further down the 155 pound ladder via Josh Thomson head-kick TKO in April. While bringing the anger into a fight is never a problem for Diaz, he’ll have an extra bit of frustration since Maynard is forcing him to miss his high school reunion. Now he’ll never know who got fat...

Nate Diaz losses normally come against wrestlers who grind out decisions. In the last two fights against Henderson and Thomson, though, he hasn’t been able to find his timing on the feet. Whatever is wrong with his internal clock, he fixes it Saturday night. Maynard’s power poses problems, but he’ll spend too much time at the end of Diaz’s reach to make use of it. With two fights behind them, Diaz will have figured out the secret to Maynard's game. Nate punches his way to a unanimous decision victory. Fight predictions are easy. What he says in the post fight interview, that’s anybody’s guess.

That wraps up another five course edition of the Downes Side. Be sure to follow me on Twitter @dannyboydownes. Also, don’t forget to leave your own thoughts, comments, vitriol and stuffing recipes on the page here. If you’re not going with cornbread, though, don’t even bother.