The Downes Side: New Orleans Predictions 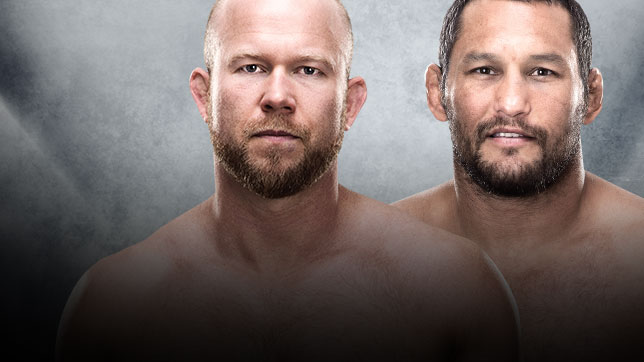 That’s right boys and girls, it’s time for the NOLA edition of the Downes Side! Spicier than jambalaya and slightly less nauseating than the French Quarter on a Sunday morning, it’s the type of predictions piece that Stephen Ambrose would appreciate.

Brining more punch than Emeril Lagasse, the UFC rolls into the Smoothie King Center for a Fight Night this weekend. In the main event, MMA legend Dan Henderson searches for a win against Tim “The Barbarian” Boetsch. In the co-main event of the night, heavyweights Ben Rothwell and Matt Mitrione throw down in a battle that’ll be too intense for James Carville. Who has the beignets? It’s fight time!

We open the main card in the bantamweight division with Francisco Rivera and Alex Caceres. Loser of two in a row (albeit one that was controversial against Urijah Faber), Francisco Rivera needs to get back in the win column. Riding a two-fight losing streak of his own, Caceres looks to steal that momentum for himself.

The major factor in this fight will be whether or not Caceres can bring it to the ground. He can strike at a distance, but Rivera has a distinct power advantage. Rivera may be relatively inaccurate, but he does have a 74.07% takedown defense rate. He’ll keep it standing, and as long as he doesn’t tire out, he takes the unanimous decision.

We stay at 135 pounds for Joe Soto and Anthony Birchak. Fighting for the first time since an unsuccessful debut against TJ Dillashaw, Joe Soto still seeks that first career UFC victory. Extremely well-rounded, 13 of his 15 career victories have been finishes. Nicknamed “El Toro,” Birchak was definitely more of the bull than the matador in his last fight where he lost by first-round heel hook.

It’s difficult to judge where either one of these fighters stand in the division. Soto fought the champion on short notice, and Birchak only lasted 64 seconds. I, for one, never shirk my responsibility to judge and draw broad conclusions from limited evidence. Luckily for Soto, it’ll take him way less time to win this fight than Congress would to enact legislation. He’s simply an overall better athlete with a more diversified set of skills. He wins by second round submission.

Next we move to featherweight for Thiago Tavares and Brian Ortega. A UFC mainstay since 2007, Tavares is currently experiencing the best run of his career. Winner of four of his last five, 13 of his career wins have come via submission. Ortega looked good in his debut against Mike De La Torre in July, but had the result overturned due to a failed drug test.

Both of these fighters have strong grappling games. That means that whoever controls the engagements will control the fight. Tavares may not have the most polished striking repertoire, but he does have a strong clinch and better defense. Ortega may come out strong initially, but he’s making a big jump in competition. The pressure will eventually wear him down and he’ll drop the unanimous decision.

We move to lightweight for Dustin Poirier and Yancy Medeiros. After his first-round loss to Conor McGregor (a little known Irish fighter some of you might have heard of), Poirier moved up a division and bounced back with a first-round knockout of Diego Ferreira. An aggressive striker, Medeiros has shown his growth by winning his last two fights by submission.

Whenever a fighter moves up a division, you have to wonder if they’ll have enough power to contend. We may have a small sample size, but Poirier maintained his KO power and grappling strength. Medeiros may be prone to brawling, but that may work for him. Poirier does best when opponents let him control the pace. Medeiros will come forward and keep “The Diamond” on his heels. Poirier is always a danger to land a clean counter punch, but Medeiros pulls the upset and wins by decision.

That brings us to heavyweight for Ben Rothwell and Matt Mitrione. The only thing more prominent than Rothwell’s size and power is his Kenosha accent. After trading off wins and losses since 2008, Rothwell finally won two in a row, most recently an impressive first-round TKO win over Alistair Overeem. Another hard-hitting heavyweight who has only gone the distance twice, Mitrione currently rides a three-fight win streak (all by first round TKO).

The odds of this fight going two rounds aren’t good. Rothwell may be a bit more patient than Mitrione, but he has no problem going toe to toe with big hitters. Mitrione has the speed advantage, but he also has a much looser guard. This fight could go either way, but Rothwell’s technical superiority and clinch game will be the difference makers. Big Ben takes this one by first-round TKO.

Time for the main event! Much like those Capital One commercials, Tim Boetsch proves that it’s hard for a barbarian to live in the 21st century. Coming off a submission loss to Thales Leites in January, he could use a statement win. Things haven’t been going much better for Dan Henderson lately, either. A legend of the sport, the 44-year-old has gone 1-5 in his last six fights.

You never know what to expect in a Dan Henderson fight. He’s definitely slowed down the last few years, but his fight against Shogun Rua last March shows that he can still end a fight with a single punch. Boetsch doesn’t have that same ability, but he can overwhelm his opponents with volume and pressure. Everyone likes to talk about Henderson’s impressive Greco-Roman credentials, but we haven’t seen him actually wrestle an opponent since the Reagan administration. It won’t be pretty, but Boetsch pressures, scrapes and claws his way to a decision win.

That wraps up another Downes Side as satisfying as Popeyes chicken. Follow me on Twitter @dannyboydownes. Also, don’t forget to leave your own predictions, predications, predikants or predominantly preemptive posits on the page here.