The Downes Side: Goiania Predictions 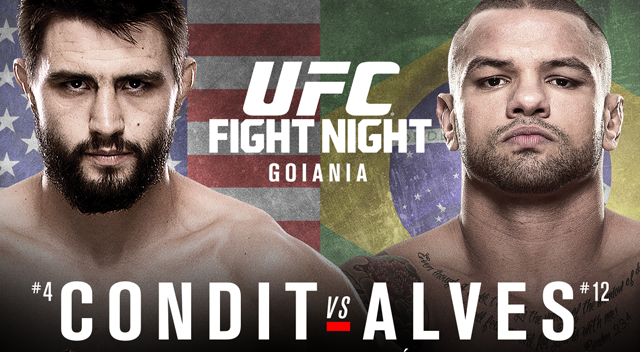 That’s right boys and girls, it’s time for another educational edition of the Downes Side. School may be out for summer, but the Nostradamus of MMA is always teaching lessons.

Way more interesting than a microeconomics lecture, the UFC is back in Brazil for a Fight Night. Live from the Goiania Arena, the main event features welterweights Thiago “Pitbull” Alves and Carlos “The Natural Born Killer” Condit. In the co-main event of the night, Nik Lentz and Charles Oliveira fight for positioning in the crowded 145-pound field. Be sure to take copious notes, it’s fight time!

Wendell Oliveira vs. Darren Till

We open in the welterweight division with Wendell Oliveira and Darren Till. Oliveira is a big-hitting Brazilian who lost his UFC debut against Santiago Ponzinibbio back in September. Primarily a striker, he owns 13 career KOs. Darren Till makes his UFC debut, stepping in for an injured TJ Waldburger. The Brazil-based Brit has a Muay Thai background and 8 career KOs.

I have a soft spot in my heart for pale, rangy strikers. You can’t let emotions get in your way, though. I’d pick against my own father if he were a fighter (mostly because he has terrible cardio). The 22-year-old Till has a lot of upside, but I doubt he’ll be able to handle Oliveira’s initial onslaught. Till takes a slower, methodical approach and Oliveira comes out guns blazing. He takes it by second round TKO.

We move to lightweight for Francisco Trinaldo and Norman Parke. Holding a 6-3 record inside the Octagon, Trinaldo has won his last two fights against Leandro Silva and “Admiral” Akbarh Arreola. Northern Ireland’s Norman Parke saw his five-year undefeated streak come to an end at the hands of Gleison Tibau. A high volume attacker, 12 of his career wins have come via submission.

Trinaldo is another one of those Brazilian powerhouse fighters. Unlike Darren Till, though, Parke has the requisite skills to counter a power-heavy attack. He may not have the best takedown percentage, but he does mix in wrestling to keep opponents off balance. His footwork and patience helps him avoid the KO strike and “Stormin” Norman cruises to the unanimous decision win.

Next we jump up to light heavyweight for Francimar Barroso and Ryan Jimmo. A skilled kickboxer and Brazilian Jiu-Jitsu black belt, Barroso can do a little bit of everything. Jimmo is another fighter with strong all-around ability. His karate based striking has led him to some impressive knockouts (including a seven-second one over Anthony Perosh), but he can also grind opponents down.

Barroso is one of those fighters that’s never really shone through. On paper, he should be terrific, but his background just hasn’t translated to the Octagon. He’s a lot like remakes of hit movies from the 80s. Sounds great in theory, but they’re just missing that little something special (although I have heard good things about Mad Max). Jimmo may suffer from defensive lapses, but he can take control of a fight. He beats up Barroso on the feet, mixes in a couple takedowns against the fence and eventually secures the ground-and-pound TKO in the second.

We return to lightweight for KJ Noons and Alex Oliveira. A former professional boxer, Noons still relies on his hands as his primary weapon. Having said that, he has translated his boxing to MMA and defends takedowns at a 70.33% rate. “Cowboy” Oliveira makes his second appearance in the UFC after losing to Gilbert Burns in March via armbar. That submission won’t hurt nearly as much as the cease and desist letter from Donald Cerrone’s lawyers for nickname infringement. That’s right, even ol’ gunslingers like Cerrone know the benefits of trademark law.

Oliveira has power, but he’s wild. He keeps his hands low and often finds himself out of position. He has a long reach, but he often negates it with a poor sense of distance. All of these things play into Noons’s wheelhouse. He may not have the most diverse attack, but he’s technically sound. He’ll counter punch and slip Oliveira’s blitzes to take the decision.

That brings us to featherweight for Nik Lentz and Charles Oliveira. My favorite carny since the guy that let me ride “The Zipper” for free, Nik Lentz is a former Division I wrestler. Known as a grinder, he’s been making strides with his striking. Oliveira is one of the most dynamic grapplers in the UFC. Six of his seven wins inside the Octagon have come by submission.

This is a rematch a long time in the making. The two fought back in June of 2011, and the action-packed fight was ruled a no contest when Oliveira struck Lentz with an illegal knee. Lentz was losing that fight, but it was because he was so one-dimensional. He was so desperate for the takedown, that he made it easy for Oliveira to defend. This time, the Carny has a few new tricks up his sleeve. Nobody’s going to confuse him for an elite striker, but he can mix up things to hide the takedown. Oliveira has early success, but Lentz takes rounds two and three for the UD.

Time for the main event! Carlos Condit returns to action for the first time since suffering a knee injury against Tyron Woodley at UFC 171. With 14 career KOs and 13 submissions, this is a man who just likes to go out there and fight. To borrow a phrase from Matt Brown -- Condit is a technical brawler. Thiago Alves is another man who likes to throw down. Currently on a two-fight winning streak, he dropped Jordan Mein with a body kick KO back in January.

Both of these fighters have high striking rates and aggressive attitudes. Condit prefers to attack at a distance, while Alves likes to get on the inside. More so than how Condit rebounds from his injury, the real determining factor here is the Pitbull’s cardio. Condit can be a slow starter, but Alves needs to be able to keep his foot on the gas for the entirety of the fight. Outside of the Woodley fight, Condit hadn’t been finished since 2006 against Pat Healy and I just don’t see how Alves keeps up the pressure for the entirety of a five-round fight. Condit pulls away as the fight progresses and locks up the decision.

That wraps up another edifying edition of the Downes Side. Follow me on Twitter @dannyboydownes. Also, make sure to leave your own predictions, instructions, deductions and whether or not you ever qualified for the all-school spelling bee. After making it to the last two a couple times, I finally won when I was in the eighth grade. Take that Urijah Faber.