That’s right boys and girls, it’s time for another heavy edition of the Downes Side! No, I’m not going to be a Danny Downer (although you probably should pay attention to the growing frequency of antibiotic resistant bacteria), I mean that it’s going to be literally heavy.

While you try to avoid reading WHO warnings, the UFC will be live in Zagreb, Croatia. The main event of the evening could have potential No. 1 contender ramifications, as Ben Rothwell tries to continue his winning streak against Junior Dos Santos. In the co-main event, Derrick Lewis sees if he can make the jump to the next echelon as he takes on Gabriel Gonzaga.

We open the main card in the women’s strawweight division with Maryna Moroz and Cristina Stanciu. Moroz suffered the first loss of her career against Valerie Letourneau in August. Primarily a boxer, the “Iron Lady” is more motivated than Margaret Thatcher in 1979. Stanciu makes her UFC debut off three straight first-round submissions.

This is a power vs. technique fight. Stanciu has the heavier hands and more aggressive style, but she can be wild. She also doesn’t have a ton of output and leaves a lot of openings for counter attacks. Moroz, on the other hand, has the more fluid style, but she can be inaccurate (she’s only landed 34.72% of her significant strikes). Moroz will be put in some bad spots, but so was Margaret Thatcher. The Iron Lady comes out victorious via decision. 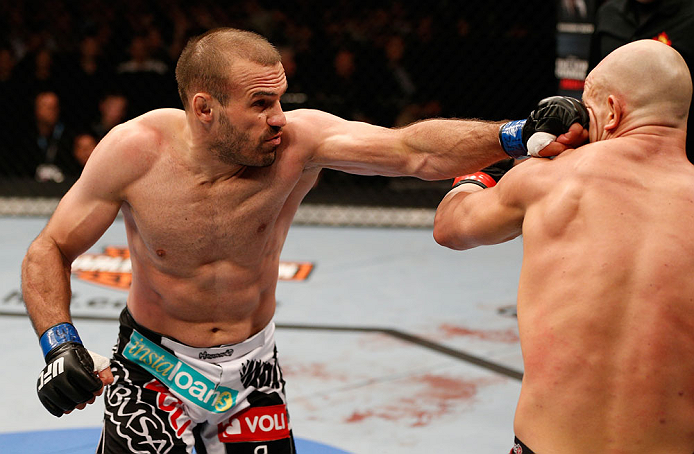 Next, we move to light heavyweight for Igor Pokrajac and Jan Blachowicz. A motivated Pokrajac returns to the UFC to fight in front of his countrymen. In his three fights outside the organization, “The Duke” went 3-0, finishing all of them in the first round. Blachowicz hopes his opponent’s homecoming goes as poorly as the one I had freshman year of high school. At least Blachowicz knows his date won’t ditch him (for his sake, I hope so).

Pokrajac has had success since leaving the UFC, but his opponents had a combined record of 7-8. Blachowicz may have had some recent troubles, but he should maintain his power and speed advantages. This should be a war of attrition, and as long as Blachowicz doesn’t tire himself out, he’ll take home the unanimous decision.

That brings us to the first of the four straight heavyweight fights. Timothy Johnson’s mustache couldn’t protect him from a rough decision loss to Jared Rosholt his last time in the Octagon. A former Division III wrestler with strong movement for the division, all nine of his wins have been finishes (5 KOs and 4 submissions). Poland’s Tybura makes his UFC debut and has a lot of hype surrounding him after winning the heavyweight title in M-1.

Johnson has solid overall skills, but doesn’t really overwhelm opponents in any one facet. Tybura has railroaded opponents, but this is his first real test. Tybura blends his striking and grappling better than Johnson, and that will be the difference. Johnson may be a better pure wrestler, but his entries could use some work. Tybura will catch him with uppercuts and other short shots, then break away to great distance. Tybura still has a lot to prove, but he’ll walk away with the second round TKO. 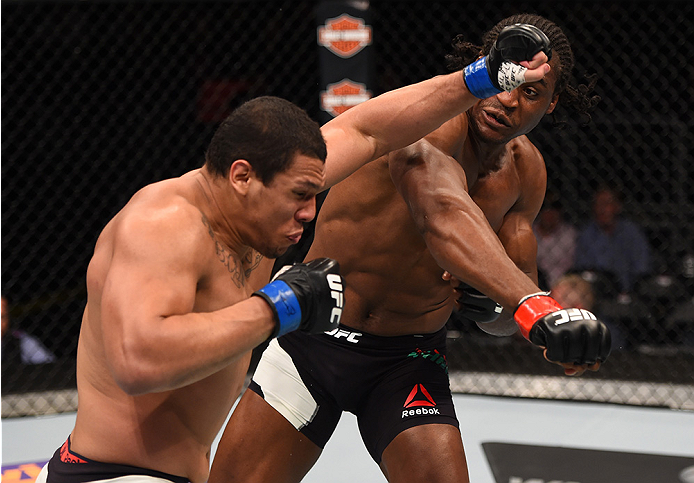 We move on to Francis Ngannou and Curtis Blaydes. A striker with a strong jab, Ngannou knocked out Luis Oliveira in his debut in December. A junior college wrestling champion, Blaydes is another Fight Night debutant. “Razor” (yeah, that’s right) has a lot of power, but can still be a bit wild at times. He’ll have to tone it down if he doesn’t want to get cut.

Once Ngannou finds his range, he can get into a pretty solid groove. He is a bit of a slow starter, though. Blaydes cuts right to the chase. He knows that wrestling is his strong suit and he’ll slice right through opponents to get the takedown. The question here is cardio. Blaydes will be fine in the first round, but I wonder how he’ll look in the second and third. He’ll be fatigued, but his takedowns will be enough for him to take the unanimous decision.

Next we move to Derrick Lewis and Gabriel Gonzaga. Lewis has found some momentum with two devastating KOs over Viktor Pesta and Damian Grabowski. Extremely aggressive, he’s only gone to a decision twice in his entire career. Best known for his head kick knockout of Croatian legend Mirko Cro Cop (although he did lose the rematch two fights ago), Gabriel Gonzaga could be stepping into enemy territory. The 36-year-old has power in his hands, but he’s most effective when he focuses on his Brazilian Jiu-Jitsu skills.

MMA is an unpredictable sport. The heavyweight division is the most unpredictable slice of that crazy pie (here’s also a list of crazy pies). Lewis appears to be on the rise and Gonzaga appears to be on the tail end of his career. Logic would dictate that Lewis should win. But then again, logic would also dictate that Colgate should never had promoted a line of frozen dinners. Well, that executive probably got fired and Derrick Lewis wins by first-round TKO.

Time for the main event! He worked his way into our hearts by dancing and laughing maniacally, but Ben Rothwell has also performed inside the Octagon. He’s won four straight fights (6-3 in his UFC career) including two in a row with his patented “bear trap” choke. Former champion Junior Dos Santos continues his quest for another title shot. That road became a bit more difficult with his most recent loss to Alistair Overeem, but he could regain positioning with a win here.

This is another fight where anything could happen. Dos Santos’s right hand could put Rothwell down, and Rothwell could hurt JDS in the clinch or slap on the bear trap. The key to this fight will be aggression. Both fighters tend to struggle when they’re being passive and allow their opponent to dictate the pace. JDS may have more hand speed, but Rothwell has a better command of range. I believe that this is Rothwell’s time to shine. He’ll make the case for a heavyweight title shot and defeat Junior Dos Santos by unanimous decision.

That wraps up another uplifting edition of the Downes Side! I’m sure it was educational for everyone (even though your brains are already deteriorating by the time you’re 27). Follow me on Twitter @dannyboydownes. Also, don’t forget to leave your own predictions, thoughts, comments or uncomfortable facts on the page here. Did you know that more Americans can name all five members of the Simpsons family than freedoms guaranteed in the First Amendment?