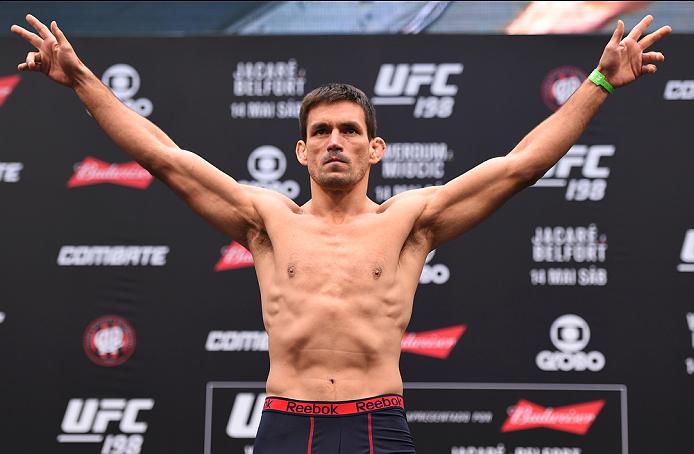 That’s right boys and girls, it’s time for another edition of the Downes Side. It’s back to school time for a lot of children and the Nostradamus of MMA’s class is in session, too. Fortunately for all, I have a very lax truancy policy.

This weekend from the Rogers Arena in Vancouver, British Columbia, the UFC rolls in for a Fight Night on FOX. In the main event of the evening, top 5 welterweights Demian Maia and Carlos Condit square off to see who will be one step closer to a title shot. We’ll break down that fight and a few others. Put the pens and pencils away, it’s fight time!

We start in the middleweight division with Sam Alvey and Kevin Casey. While I still struggle to cope with a misplaced apostrophe in his nickname (Smile’N), Alvey knows how to place a knockout punch. He has 17 career KOs and 12 of them have come in the first round. A veteran of six fights inside the Octagon, Casey has to have one of the oddest UFC career records of all time – a draw, two no contests, a win and two losses.

Alvey is not what you would call an “active” fighter. In fact, he can go minutes at a time without throwing a single strike. He sits back, waits for opponents to move and hopes to land a counter strike. He’s had success with the strategy, but he better hope he gets the finish because he’ll never win on a scorecard. Casey is a strong fighter who attacks in bursts. His takedowns come from muscling opponents more than technique. Coupling that with Alvey’s 87.5% takedown defense, this fight is going to be on the feet, and that favors Alvey. Casey could win the early moments of the round with footwork and distance, but that’s not really his game. He likes to get in there and throw leather. Alvey simply has all the advantages in a fight like that. Smile’N Sam will be add’N another first round knockout to his record.

Next we move to the women’s bantamweight division for Paige VanZant and Bec Rawlings. VanZant returns to the Octagon for the first time since her loss to Rose Namajunas in December. She’s also fresh off her stint on “Dancing with the Stars.” So for any fans of DWTS that are reading this column for the first time, think of me as Bruno, but with far less charisma. A TUF 20 vet, “Rowdy” Bec Rawlings has won her last two fights over Seohee Ham and Lisa Ellis.
RELATED: Road to the Octagon - VanZant vs Rawlings | VanZant's Warrior Code | VanZant embracing the spotlight

We all knew the 22-year-old VanZant had holes in her game, and the Namajunas fight exposed all of them. Offensively, she’s solid. She’s aggressive, high volume and always looks for the finish on the ground or the feet. Defense (both striking and grappling) is where she leaves openings. Bec Rawlings mirrors her in a lot of ways. She, too, likes to charge forward and fight in a box. Primarily a boxer, she will slip in the occasional submission attempt. VanZant’s hand speed and overall quickness will be the difference maker. She’ll still get hit, but she will determine the pace and the points of engagement. Rawlings’s best path to victory would be to make it a clinch fight where her size and technique advantage would shine, but she might not be able to keep VanZant in one place. PVZ wins by unanimous decision.

That brings us to the featherweight division for Anthony Pettis and Charles Oliveira. It’s been a rough patch for the former lightweight champion as of late. “Showtime” has lost three in a row and hopes the drop down to 145 pounds can 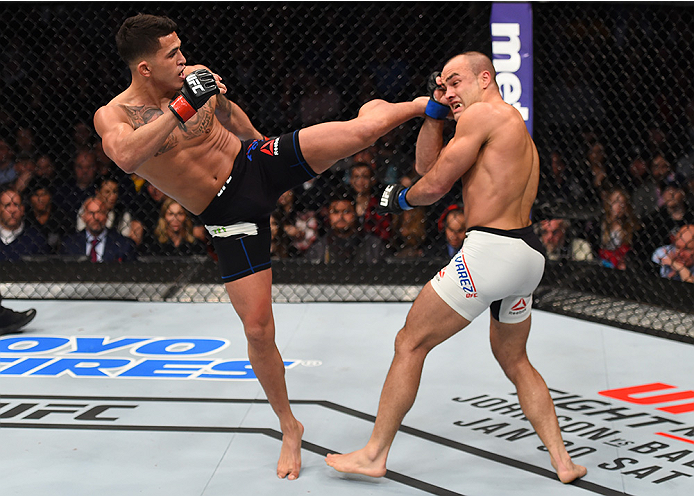 give him a momentum boost. As far as featherweight greeters are concerned, they don’t come much tougher than Charles Oliveira. He’s 4-1 in his last five fights and 19 of his career wins have been finishes (6 KOs, 13 submissions).

If Pettis wants to get off this current skid, he has to be more aggressive. He’s a brilliant, patient counter striker with one of the most dynamic kicking games in the UFC. If you look at his three losses, though, a pattern starts to emerge. Opponents pressure him, crowd his range and refuse to let him get comfortable. Especially in the case of Charles Oliveira, he’s at his best when he’s moving forward. He likes to blitz opponents with combos and then use that momentum to bring the fight to the ground. Pettis needs to have cage awareness. If he allows himself to get pushed up against the fence, he’s in for a rough night. He has a more disciplined approach than Oliveira, and that should help him. Pettis controls the middle, slips in a few counter punches and takes the decision win.

Time for the main event! While a lot of fighters with Brazilian Jiu Jitsu black belts try to force themselves to become standup fighters, Demian Maia has done the exact opposite. He’s embraced grapple-heavy tactics en route to five straight victories. By contrast, Carlos Condit’s last fight against Robbie Lawler had very little grappling. “The Natural Born Killer” has one of the most diverse striking attacks in the UFC. He’ll attack from both stances, at different levels and with any limb possible.
RELATED: Maia makes baseball debut | Maia returns in search of title shot | Condit Warrior Code | Maia vs Condit Watch List

In a way, it’s sort of refreshing that Demian Maia doesn’t mess around with being a striker. If you watch his last two fights against Matt Brown or Gunnar Nelson, he’s shooting for a takedown within ten seconds of the round beginning. Now he may not have the best takedown conversion rate (31.25%), but he’s relentless. Even if his initial attack is rebuffed, he pressed forward and shoots again. I think this tactic can work against Carlos Condit. Robbie Lawler has a totally different skill set, but his greatest success came when he was pressuring Condit and controlling the center of the Octagon. The real question, however, is, “How will this play in the later rounds?” Condit is one of those fighters who becomes stronger as the fight progresses. While most fighters are trying to stall in the fifth round, he’ll still have a tremendous output. Condit will start to pour it on in the late rounds, but it will be too little, too late. A battered, bruised Maia wins by unanimous decision.

That wraps up another scholarly edition of the Downes Side. Follow me on Twitter @dannyboydownes. Also don’t forget to leave your own thoughts, predictions, insights and least favorite teachers on the page here.