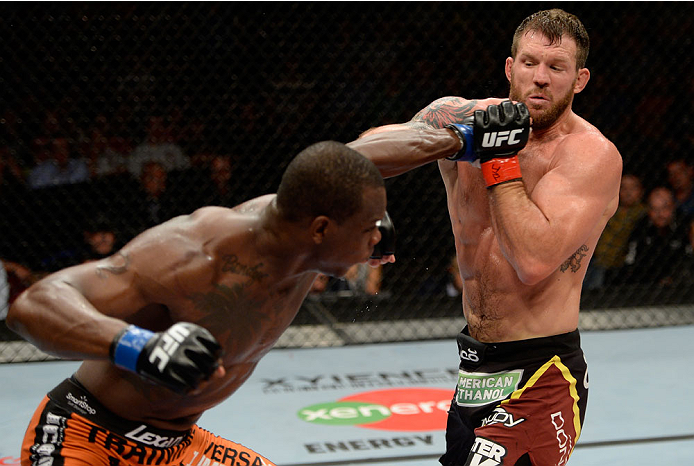 That’s right boys and girls, it’s time for the first Uberlandian edition of the Downes Side! That’s right, Uberlandia is an actual place, and not the setting of a fantasy novel.

There may not be any dwarves, orcs or drows battling in the Ginásio Municipal Tancredo Neves, but there will be some of the best MMA fighters in the world. In the main event, former Strikeforce standout Ovince Saint Preux could earn the biggest win of his career against former champion Mauricio “Shogun” Rua. The co-main event of the night could determine the next flyweight title challenger as Ian McCall and John Lineker compete. It doesn’t matter if you’re a mensch or an übermensch, it’s fight time!

We open in the women’s strawweight division for Juliana Lima and Nina Ansaroff. Lima lost her UFC debut back in July after a hard-fought three-rounder against Joanna Jedrzejczyk. An aggressive striker, she throws a lot of strikes but lacks accuracy. Ansaroff is another striker who’s riding a five-fight win streak.

Ansaroff has the greater technical ability, but that comes at a price. She tries to be too perfect with her strikes and doesn’t pull the trigger enough. Lima, on the other hand, has not problem attacking, but doesn’t focus on the target. If she can push Ansaroff against the fence, Lima could pull out the decision, but in a close fight like this you have to choose the fighter with superior talent. Ansaroff by decision.

We move to welterweight for Claudio Silva and Leon Edwards. A submission expert, “Hannibal” Silva has finished opponents in eight of his ten career victories.  Based out of England, “Rocky” Edwards is an explosive striker on a six-fight win streak (five of those by finish). His grappling skills haven’t been tested much, but he does seem capable on the mat.

Much like the proletariat vs. the bourgeoisie, the striker vs. grappler conflict has gripped man since the beginning of civilization. Some say it’s why cavemen decided to paint [editor’s note: nobody says that]. Normally I give the edge to the grappler, but not in this case. Edwards may not be an outstanding grappler, but he has the basics. I can’t say the same for Silva’s stand-up. He just doesn’t blend his strikes well with his takedown attempts. Edwards stays off his back and will pick Silva apart on the feet with quick combinations. Unless Edwards make me root against him by coming out to the Rocky theme or “Eye of the Tiger,” he wins by third round TKO.

We stay at welterweight for Warlley Alves and Alan Jouban. Winner of season three of TUF Brazil, Alves looks like the real deal. He trains with “Jacare” Souza down at the X-Gym in Brazil and has shown proficiency everywhere. He has power in his hands and a strong submission game (especially his guillotine). Muay Thai standout Alan “Brahma” Jouban will try to derail the youngster’s momentum with his southpaw striking. He lands 5.7 significant strikes per minute and defends at a 61.54% rate.

Jouban has only been finished once in his career, but that mark is going to double after Saturday. If this were a pure kickboxing match, the edge would go to Jouban. He may not have the raw power, but he does use his range well and chooses his attacks wisely. As soon as he kicks, though, Warlley will charge through and fight in close quarters. From there, he’ll finish the takedown, advance position and beat Jouban up from top position. It’ll take some time, but Alves wins his second fight in the Octagon via submission in round two.

That takes us to the co-main event. After a rough beginning to his UFC career, Ian McCall righted the ship and has won two straight over Iliarde Santos and Brad Pickett. As beloved as anybody ever named “Uncle Creepy” could be, McCall mixes his striking and takedowns in a way that keeps opponents constantly off-balance. Lineker doesn’t really mix things up. Then again, after the way he’s been knocking opponents out, there’s probably not much of a need for variety.

While the average fan may not have the same keen powers of observation as the Nostradamus of MMA, it doesn’t take a Dan Downes to realize what McCall should do. When you face someone with the KO power of Lineker, you put him on his back. If his mustache, PBR tallboy and (presumably) apartment full of Apple products were any indication, however, this man is a non-conformist. He’ll try to go toe-to-toe with Lineker and ultimately pay the price. McCall hasn’t finished somebody by strikes since 2007 and November 8, 2014 is the wrong time to try to start again. Lineker wins this by first-round KO.

Time for the main event! The former champion has had a rough go of it as of late. His wife and mother have asked him to retire, people have written him off as “over the hill” and he’s 2-3 in his last five fights. Stepping in for an injured Jimi Manuwa, former collegiate football player Ovince Saint Preux could make some major waves with a win.

They say numbers never lie, and that may be true. But they don’t tell the full story. If you look at Shogun’s last few fights, they’ve been against the elite of the division. Say what you will about Dan Henderson, the man still beats the majority of light heavyweights out there. OSP has a lot of upside, but there aren’t enough tools in his shed. My father-in-law says you can fix anything with a hammer and duct tape. Well, that philosophy didn’t help him when his truck’s transmission went out and it won’t help OSP here. Shogun may be in the twilight of his career, but he’ll sprawl and scrap his way to a second round KO.

That wraps up another uber-entertaining edition of the Downes Side. Follow me on Twitter @dannyboydownes. Also, don’t forget to leave your own analysis, quandaries, quips and Uber Cab Confessions on the page here. Mine involves an inebriated Irishman, the Fourth of July and (probably) illegal explosives in a confined space.