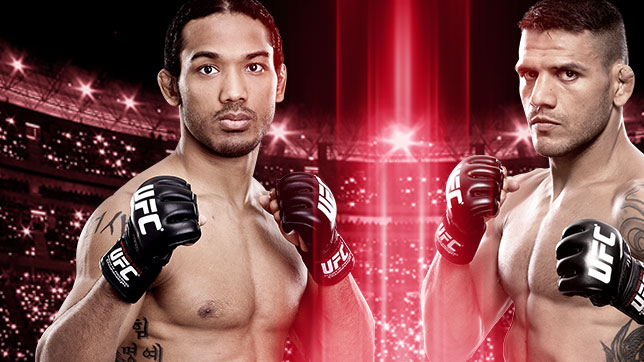 Grab your favorite Rodgers and Hammerstein album boys and girls, because it’s time for an Oklahoma-sized version of the Downes Side! Personally, I’ve always preferred The King and I, but there’s no way the UFC will be going to Siam anytime soon.

While we hold out for a return to Basutoland, the UFC rolls into Tulsa, Oklahoma, for an UFC Fight Night second helping. The main event of the night could determine a future challenger for the lightweight title as former champion Benson Henderson meets Rafael Dos Anjos. In the co-main event of the night, Mike “Quicksand” Pyle looks to maintain his late career resurgence against the “Young Gun” Jordan Mein. It’s only a 30 minute drive to Claremore, so let’s get down to business!

We open up in the featherweight division with Chas Skelly and Tom Niinimaki. Nicknamed “The Scrapper,” Skelly has proven to be much more and has used his well-rounded skills to finish eight opponents. He’ll try to get back to his winning ways after the first loss of his career against Mirsad Bektic. Tom “Stoneface” Niinimaki saw his 12-fight win streak snapped after a first-round submission loss to Niklas Backstrom in May. Besides having more i’s than an Apple product catalog, Niinimaki has seven KO wins and eight submission wins to his credit.

This fight will be won in the clinch. Both fighters want to bring this fight to the ground and make it a grappling affair. Bearing that in mind, Skelly has the physical advantage, and better offensive wrestling. Niinimaki has a dangerous jiu-jitsu guard, but Skelly will smother the attacks for the unanimous decision win.

We move to lightweight for James Vick and Valmir Lazaro. With only five career fights, TUF 15 veteran James Vick made quite the first impression with his first-round submission win over Ramsey Nijem in August. Another fighter from Brazil’s vaunted Nova Uniao camp, Valmir Lazaro is a hard-hitting knockout artist who’s had a lot of success on the Brazilian regional circuit.

Normally, I choose the fighter who can change the course of a fight in a single moment. In this case though, Lazaro is still an unproven commodity to trust with the Nostradamus of MMA’s seal of approval. We just don’t know how he’ll respond to hardship. Vick has the more well-rounded skill tree, plus his defense is tight enough to avoid the wild kill shot. The “Texecutioner” absorbs the initial blitz, and then he’ll slowly work Lazaro down. The Brazilian gasses out and Vick picks up the third round TKO.

We return to featherweight for Max Holloway and Clay Collard. With eight fights inside the Octagon under his belt before his 23rd birthday, “Blessed” Holloway is known primarily for his kickboxing. He’s rounded out his skill set though, and he locked up the first submission win of his career in April at UFC 172. A late replacement for Mirsad Bektic, I haven’t decided if “Cassius” Clay Collard’s nickname is clever or lazy. At the very least, he probably would have lower expectations if he just took my suggestion -- “Henry” Clay Collard.

One day Collard may float like a butterfly and sting like a bee, but expect him to have more in common with Henry Clay’s 1824 presidential bid. Holloway is just too much, too soon.  Holloway will initially come out tentative in order to get a read on Collard. Once the Hawaiian starts to pick up on his opponent’s timing, he’ll start to pick him apart. Collard will tie up to avoid damage, but Holloway puts him on his back and wins by first round TKO.

We move to middleweight for Francis Carmont and Thales Leites. Carmont may be “Limitless” but he’s suffering a mid-career hangover after losing two straight. A Tristar gym product, Carmont wins with a steady, grinding approach. Another grapple-heavy fighter, Leites showed off some KO power with a 45-second TKO over Trevor Smith in April.

Many people expect another clinch-heavy win from Carmont, but Leites is my upset special . Carmont does well when he can physically overpower opponents. He may have the strength advantage, but not enough to control Leites for extended periods of time. Furthermore, Carmont may be known for his smothering top game, but he hasn’t shown much in the way of jiu-jitsu skills. Leites has slowly improved his striking, and he’ll wear Carmont down in the clinch to take the unanimous decision.

That brings us to the co-main event of the evening. Mike “Quicksand” Pyle’s MMA career resurgence is seconded only by Matt Brown’s. After losing to the aforementioned Brown in 29 seconds, the 38-year-old bounced back with a third-round TKO over TJ Waldburger at UFC 170. An accomplished grappler, Pyle has been showcasing some of that old man strength, as four of his last five wins have come via knockout or TKO. Mein suffered a TKO loss of his own to Matt Brown, but gained some momentum back with a split decision win over Hernani Perpetuo in April.

This one has Fight of the Night written all over it. Both fighters will stand in front of one another and let the leather fly. You always wonder about a fighter with as many years under his belt as Pyle, but Mein has logged a lot of miles for being only 24 years old. Mein is a better counterpuncher, but he leaves a lot of openings for overhand rights. Mein does have the striking advantage at distance, but anticipate Pyle to attack from the clinch. After landing a couple knees and short punches, Quicksand will come over the top with a vicious elbow. He’ll follow up with some ground-and-pound and take the second round TKO.

Time for the main event! Former UFC and WEC champion (and least likely member of the Anthony Pettis fan club), Benson “Smooth” Henderson continues to make his case for another shot at the title. Last time he stepped into the Octagon, Henderson out-grappled sambo star Rustam Khabilov en route to a fourth round rear naked choke. The #5 ranked lightweight, Rafael Dos Anjos has quietly put together an impressive resumé with wins over Jason High, Donald Cerrone, Evan Dunham and Mark Bocek.

Henderson often receives criticism for not putting opponents away. While his fights certainly look close on the judges’ scorecards, it’s hard to think of a time when he’s looked vulnerable inside the cage against someone not named Anthony Pettis. His sense of range and underrated power have just proven too much for the majority of 155-pound fighters in the world, and Dos Anjos will add his name to the list. The Brazilian can create opportunities at distance, but he won’t be able to contend when the fight moves into close range. Henderson mixes his clinch attack with takedowns for another impressive unanimous decision win.

That wraps up another Downes Side that would cause even the most stoic Prussian to smile. Follow me on Twitter @dannyboydownes. Also, don’t forget to leave your own predictions, fallacies, inquires and favorite fictional cities on the page here. I’m going to go with Walla Walla, Washington. No way that could be a real place. It’s like a Narwhal being a real animal.