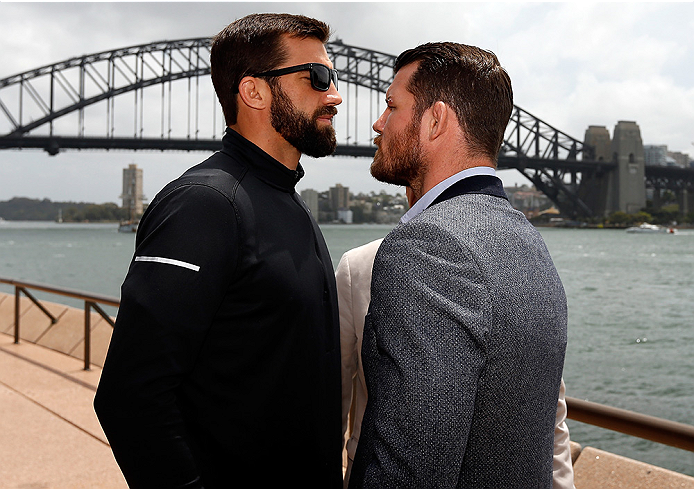 That’s right boys and girls, it’s time for another Australian version of the Downes Side!

No matter what direction your toilet flushes, I think we all can agree that we should direct our attention to UFC Fight Night this Friday. Live from the Allphones Arena in Sydney, Australia, the main event of the evening features a middleweight clash between Luke Rockhold and Michael “The Count” Bisping. In the co-main event of the night, lightweights Ross Pearson and Al Iaquinta try to move up the crowded 155-pound ladder. Northern Hemisphere or Southern Hemisphere, it’s fight time!

We begin in the heavyweight division with Soa Palelei and Walt Harris. After winning three straight in his return to the Octagon, “The Hulk” Palelei dropped a unanimous decision to Jared Rosholt in June. A strong wrestler with brutal ground and pound, he’s struggled with his cardio. Harris returns to the UFC after losses to Jared Rosholt and Nikita Krylov. A fast starter who has won all his fights in the first round, he can lack discipline inside the cage.

Harris may be “The Big Ticket,” but so was the one I received from the San Diego Police Department for parking in a loading zone (seriously, I was only there for like a minute!). Expect Palelei to make Harris feel as unwanted as a traffic citation. Harris has a lot of athleticism and power, but he’s still raw. I worry about the Hulk’s sub-par stand-up defense, but he’ll survive long enough to drag Harris to the ground. From there, he’ll drop punches until the ref has had enough. Palelei by first round TKO.

We move to middleweight for Robert Whittaker and Clint Hester. Winner of TUF Smashes, Whittaker moves up to 185 pounds after a 2-2 record at welterweight. Well-rounded with wins by both KO and submission, he hopes to use speed and footwork to his advantage against larger and presumably slower opponents. A veteran of season 17 of The Ultimate Fighter, Clint Hester holds a 4-0 record inside the Octagon. Originally a professional boxer, the “Headbussa” has transitioned well to MMA, developing other skills to go along with his power.

This is my early favorite for Fight of the Night. Both fighters have capable wrestling, but expect this fight to be a kickboxing match. There are a lot of question marks surrounding Whittaker and how he’ll handle the move up in weight. He darts in and out well, but leaves openings for counter attacks. Hester may struggle in the opening frame, but he’ll start to read Whittaker’s timing. The Headbussa wins by KO in the second.

The brings us to lightweight for Ross Pearson and Al Iaquinta. A native of Sunderland, England who now trains with Alliance MMA in San Diego, “The Real Deal” Pearson is 3-1 with one no contest in his last five fights. Primarily a boxer who likes to push the pace, Pearson still defends takedowns at a 79.25% rate. Runner-up on season 15 of TUF, “Raging” Al Iaquinta is another fighter that relies on his hands to do the majority of damage. He’s also is the only UFC fighter who could be an extra on the set of Grease. Seriously, if he doesn’t have a leather jacket and an old Cadillac in his garage, I don’t know what to think anymore.

Iaquinta may be Greased Lightnin’ on the mat, but Pearson is the one that I want. The Englishman attacks from a variety of angles and mixes up his timing to disguise his offense. Iaquinta has the power advantage, but lacks the accuracy needed. Once in a blue moon  Pearson’s defense fails him, but plan on him winning by unanimous decision. Looks like Iaquinta will be Lonely at the Drive-In Movie again.

Time for the main event! A dynamic kickboxer with seven career submission victories, Luke Rockhold searches for the signature win of his short UFC career. Powerful at a distance, he also knows how to attack off his back. With a UFC career spanning 21 fights and over eight years, Michael “The Count” Bisping still lacks one thing -- a title shot. This could very well be his last chance to make a run at the title, and a win over Rockhold would be a great start. A technically sound boxer, he has upper level wrestling that often gets overlooked (probably because he’s British).

There may be a temptation to call this a “grudge match,” but it’s nothing of the sort. It’s just a Michael Bisping fight. After his poor performance against Tim Kennedy, people were ready to say Bisping is washed up. I would call that fight an aberration and I still think that the Englishman has something left in the tank. Rockhold is bigger and stronger, but he’s only made it out of the first round twice in his career. Bisping will survive the initial onslaught, take Rockhold into deep waters and ultimately pull out the decision win. You may not like The Count, but you will respect him. Or not, this is the internet after all.

That wraps up another longitudinal edition of the Downes Side! Follow me on Twitter @dannyboydownes. Also don’t forget to leave your own thoughts, posits, queries and equatorial facts on the page here. Did you know that it was Uriah Heep’s sixteenth album?