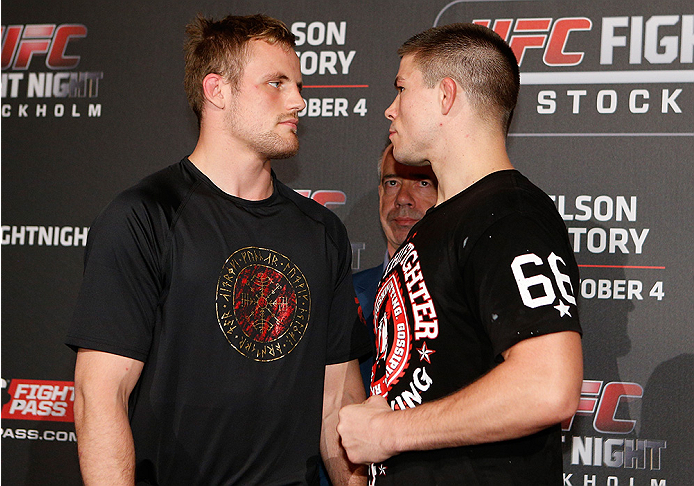 That’s right boys and girls, it’s time for a Swedish edition of the Downes Side! While the less creative types of the world may make cracks about meatballs and Muppet characters, the Nostradamus of MMA has no time for such nonsense. Instead, I want to talk about the Social Democrats and nuclear energy policy.

As Stefan Lofven figures out what to do with Vattenfall, UFC fighters will be climbing into the Octagon inside the Ericsson Globe in Stockholm. The main event of the night (depending on your geography) features a clash between Rick Story and Gunnar Nelson. In the co-main event, Akira Corassani and Max Holloway battle for a spot in the featherweight rankings. Don’t worry about forming a working coalition with the Green Party, it’s fight time!

Choosing who will win this fight isn’t as easy as just looking at the fact that one fighter has a first-round submission win and the other a first-round loss. Then again...maybe it is. Wilkinson has some grappling prowess, but he doesn’t blend it with his other techniques. Backstrom is a long, rangy striker that blends his knees and elbows into combinations. Wilkinson sits too heavy in his stance and he’ll leave himself open to counter attacks. Backstrom by second round TKO.

We move to light heavyweight for Ilir Latifi and Jan Blachowicz. After losing his UFC debut to Gegard Mousasi in a short notice fight, Latifi has rattled off two straight first-round wins against Cyrille Diabate and Chris Dempsey. A wrestler by trade, he’s shown a diverse set of skills his last few times out. Well-known on the Polish MMA circuit, Blachowicz is capable everywhere, but prefers to put his opponents on the mat.

Blachowicz is a better athlete than Latifi, with superior conditioning, but that won’t help him here. Latifi will counter Blachowicz’s aggressiveness with a well-timed takedown. He may not be able to finish the fight right away, but he won’t give up position. He’ll drop the ground and pound, soften his opponent up and finish things with a second round TKO.

We return to featherweight for Akira Corassani and Max Holloway. A TUF veteran, Corassani saw his three-fight win streak snapped by Dustin Poirier in April. After two straight losses, Max “Blessed” Holloway bounced back and now he looks to extend his finish streak to four after wins over Will Chope, Andre Fili and Clay Collard. Primarily a kickboxer, Holloway has shown a lot of evolution in a short time for a 22-year-old.

Holloway simply has more tools in his belt than Corassani. He can attack at distance, in the clinch and also has a dangerous guard if the fight moves to the ground. Corassani, on the other hand, still focuses on boxing. Holloway bounces around too much to be caught by Corassani’s wide, power hooks. Holloway has struggled with punching power, but he’s started to hurt opponents more instead of battering them with volume strikes. Corassani will rush in for a home run shot in the third and Holloway puts him away with a counter. Holloway by TKO in the third.

Time for the main event! Undefeated with four wins in the Octagon, Gunnar Nelson has a lot of hype behind him. A jiu-jitsu black belt with a karate-based striking style, a win over Story would be the signature one of his career. Unable to put together an extended winning streak during his UFC career, Rick “The Horror” Story’s combination of knockout power and wrestling presents difficulties to anyone.

Nelson has the pure jiu-jitsu advantage, but he’ll struggle to get this fight to the ground. His offensive wrestling isn’t the best, and he’ll have even greater difficulties against someone with a base like Story. Having said that, he’ll still pick up the win. Whether it’s striking or grappling, Story relies on brute force and power. He could find early success, but it won’t last for long. Nelson’s cage awareness and savvy will prevent him from getting pushed up against the fence, where Story can tee off with haymakers. Nelson counter strikes his way to a unanimous decision win.

That wraps up another non-partisan edition of the Downes Side! Follow me on Twitter @dannyboydownes. Also, don’t forget to leave your own scrutinies, speculations, surmises and Swedish festivals in the comments section here. Can you believe that Adrian Vandenberg is back?