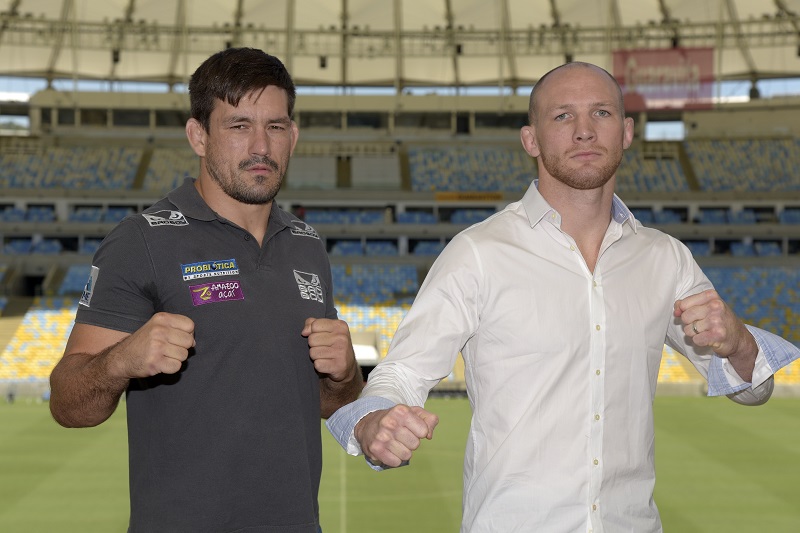 Grab your acai and linguica boys and girls, it’s time for another Brazilian edition of The Downes Side! I can’t really recommend grabbing both, however. Much like this weird cherry ham glaze I had at a wedding last week, fruit and pork products shouldn’t go together.

No matter your culinary preferences, the UFC has a fight card that’s sure to please any palate. Live from the Maracanazinho Gymnasium in Rio de Janeiro, Brazil, BJJ stud Demian Maia attempts to give Ryan LaFlare the first loss of his career. In the co-main event of the evening, Josh Koscheck and Erick Silva compete for a chance to get back into the welterweight rankings. DVR that episode of Top Chef, it’s fight time!

The main card opens up in the featherweight division with Godofredo Pepey and Andre Fili. Every one of Pepey’s last four fights has ended in the first round. Fortunately for him, the last two have been victories over Noad Lahat and Dashon Johnson. Fili bounced back from a guillotine loss to Max Holloway at UFC 172 to pick up a decision win over Felipe Arantes in October.

Much like his predecessor, Pepey is well-versed in offensive firepower, and Fili’s aggressiveness could play right into his strengths. Having said that, I still give the edge to Fili. “Touchy” may not have put a lot of thought into his nickname, but the Holloway loss was a watershed moment for him. He still comes forward, but doesn’t appear as reckless as when he first came on the scene. Two of Pepey’s career losses have come via TKO and he earns a third when Fili finishes him in the second.

We move to lightweight for Gilbert Burns and Alex Oliveira. Originally slated to face Josh Thomson, Burns tries to extend his UFC record to a perfect 3-0 with a win here. Dangerous everywhere, eight of his nine career wins have come by stoppage.

When the only thing you can find out about a guy is that he really knows how to work that “Cowboy” gimmick, you can’t really like his chances. Unless he can channel the ghost of Rooster Cogburn, Burns should take it. He has superior wrestling and a better Jiu-Jitsu game. Oliveira may go out guns blazing like Doc Holliday, but Burns eventually brings it to the ground. From there, he’ll advance position and lock up the first round rear naked choke submission.

We shift to the women’s bantamweight division for Amanda Nunes and Shayna Baszler. One of the hardest-hitting women in the division, Nunes holds eight career knockouts. She’s looking to get back in the win column after a TKO loss to Cat Zingano in September. One of the pioneers of women’s MMA, Shayna Baszler could use a win of her own. 1-3 in her last four fights, 14 of her career wins have come via submission.

Baszler is a much better grappler than Nunes, but she won’t be able to utilize those talents. Despite all her catch wrestling credentials, she still doesn’t use her strikes to set up solid takedowns. She just tries to walk through her opponents and force the clinch. Nunes will make her pay for that strategy, and beat her up on the feet. The “Lioness” plays with her food in the first and then goes for the kill in the second. She wins by TKO.

We return to lightweight for Leonardo Santos and Tony Martin. A submission expert, the Nova Uniao fighter is coming off a strong performance against Efrain Escudero last September. Following two straight losses to Rashid Magomedov and Beneil Dariush, Tony Martin responded with a first-round kimura submission win over Fabricio Camoes at UFC 179.

Martin is certainly one of the larger, stronger fighters in the lightweight division, but that comes with a price. His weight cuts are particularly draining, and (in turn) they affect his cardio. If Santos could push the pace and grind Martin down, he could make quick work of the fight. Unfortunately, Santos’s cardio isn’t much better. Both fighters may fade late into the fight, but Martin will command the first two rounds to pick up the unanimous decision victory.

That brings us to the co-main event of the night between Erick Silva and Josh Koscheck. Silva has traded wins and losses throughout his career in the UFC. A gifted athlete, his defensive lapses and overall fight IQ have been his biggest hurdles. One of the legendary members of that first season of The Ultimate Fighter, Josh Koscheck has a quick turnaround after his submission loss to Jake Ellenberger in February.

Josh Koscheck hasn’t won a fight since February 2012. I don’t care how much Nos he drinks, Kos can’t turn back time. Silva’s losses inside the Octagon (outside of the DQ against Carlo Prater) have come against Jon Fitch, Dong Hyun Kim and Matt Brown. Koscheck doesn’t have the KO power of Kim and Brown, so that means that wrestling Silva down is his best path to victory. At this point, though, Koscheck just doesn’t seem to have it. He only succeeds on 50% of his takedowns and he’ll absorb too much damage in the process. Silva snaps his win/loss pattern and takes the first round knockout.

Time for the main event! 4-2 since dropping to welterweight, Demian Maia tries to make one last push in his career. One of the best Jiu-Jitsu practitioners in the entire organization, Maia’s been slowly rounding out his other skills. LaFlare is a grinidng fighter who’s making his first real jump into the deep end of the welterweight division.

I don’t know why everyone is writing off Demian Maia. The man is only 37 years old. You know who else is 37? Kanye West. Now Maia may not be the Yeezus of 170-pound fighters anymore, but he still has something left in the tank. Sadly, that tank seems to hit empty after the first round. You know who else is 37? Tom Welling. That’s right, the guy from Smallville. The point is that Maia’s time has passed and Ryan LaFlare’s is now. LaFlare may not have the same storied career as Maia, but he’ll at least hold a W over the man. LaFlare by unanimous decision.

That wraps up another gustatory delight for your brain known as the Downes Side. Follow me on Twitter @dannyboydownes. Also, don’t forget to leave your own predictions, slander, appreciations and favorite pre-fight snack on the page here. Maybe I’ll try making one of these.