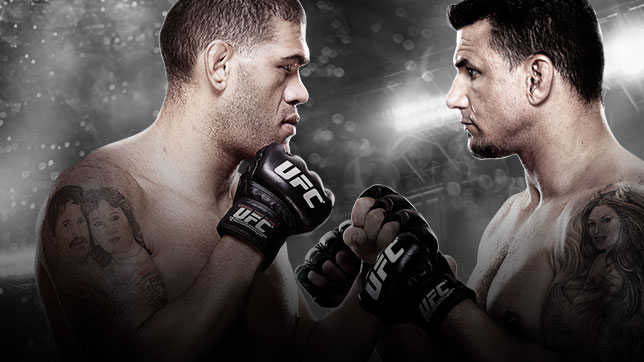 That’s right boys and girls, it’s time for another edition of the Downes Side! Be sure to grab your snow shovels because the Nostradamus of MMA is getting ready to pile the truth and expertise higher than an east coast high pressure system.

One place they won’t need snow shovels is Porto Alegre, Brazil. Live from the Gigantinho Gymnasium it’ll be about 80°F (approximately 26°C for our metric system friends) when Frank Mir and Antonio “Bigfoot” Silva will both try to get back in the win column. In the co-main event of the night, lightweights Edson Barboza and Michael Johnson face-off in what’s sure to be a Fight of the Night favorite.

We open the main card in the welterweight division with Santiago Ponzinibbio and Sean Strickland. After dropping his first UFC fight to Ryan LaFlare, Argentinean Ponzinibbio returned with a blistering first-round knockout over Wendell Oliveira. Sean “Tarzan” Strickland puts his undefeated record on the line as he makes his 170-pound debut.

Strickland may have looked lackluster in his last fight against Luke Barnatt, but the 23-year-old has a high ceiling. He’s overmatched in the striking department, but Ponzinibbio’s questionable takedown defense will be the difference. Strickland may suffer some early damage, but his grappling superiority will lead him to the third-round submission. It’s a shame because I’d really like Ponzinibbio to become a star so I can be the executive producer of his reality show Ponzi Scheme.

Next we shift to bantamweight for Iuri Alcantara and Frankie Saenz. An accomplished submission artist, Iuri Alcantara has been besting opponents with his kickboxing as of late. Coming off a successful UFC debut last August, Frankie Saenz used his patience and strong clinch game to defeat Nolan Ticman.

The best way to describe Saenz’s game would be “deliberate.” He’s not especially explosive, but he’s smart and purposeful in his movement. Purposefulness may be a part of the eightfold path, but it won’t do Frankie much good in the eight-sided cage. Alcantara’s speed will be the deciding factor, and he’ll stun Saenz with effective counter attacks. Ultimately, he brings the fight to the ground, advances position and seals things off with a second-round rear naked choke.

We move up to lightweight for Rustam Khabilov and Adriano Martins. Khabilov returns to the Octagon for the first time since Benson Henderson broke his six-fight win streak in June. An accomplished sambo practitioner, he also knows how to grill up tasty lamb dishes. Donald Cerrone dropped Martins with a head kick in January 2014, but the Brazilian bounced back with a first-round KO of his own in July.

Khabilov’s striking has been making steady gains, but Martins possesses the clear striking advantage. Not only does he have greater KO power, but he also looks more comfortable stringing combinations together. Despite that, Martins won’t be able to put his hands on the Dagestani “Tiger.” Martins defends takedowns at a 66% rate, but expect that percentage to drop dramatically. Khabilov suplexes and wrestles his way to the unanimous decision.

That brings us to a middleweight contest between Cezar Ferreira and Smilin’ Sam Alvey. Winner of the first season of The Ultimate Fighter Brazil, “Mutante” is a powerful kickboxer in addition to being a Brazilian Jiu-Jitsu black belt. Alvey has put a lot of miles on since his pro debut in 2008. A tough, durable competitor who also appeared on The Ultimate Fighter, he gained some momentum by knocking out Dylan Andrews in the first round his last time out.

This is a must-win fight for Ferreira. He’s under-performed in the past and desperately needs an impressive win in his home country. He’s a gifted athlete, but tires out and can appear lost if Plan A doesn’t pan out. Neither fighter has particularly sound defense, but Alvey has never been TKOd in his career. Ferreira tends to struggle if he can’t put an opponent away and he’ll fade as the fight progresses. Watch for Sam to be smilin’ (and perhaps bleeding) as he picks up the biggest win of his career. Alvey via unanimous decision.

We return to lightweight for the co-main event of the evening. An explosive striker with some of the most brutal leg kicks in the UFC, Edson Barboza’s power has led him to 10 career KO victories. After back-to-back losses, Michael Johnson has won three straight fights over the likes of Joe Lauzon, Gleison Tibau and Melvin Guillard.

Everyone knows that Barboza has the offensive firepower to hang with anyone in the division. People always wonder about his defense, but Barboza’s defensive lapses are as exaggerated as people’s claims that Showgirls is a “terrible movie.” Having said that, Johnson has the advantage. Leg kicks work best when you have space. They also leave you prone to takedowns. Johnson closes the distance and works his wrestling to take the unanimous decision.

Time for the main event! Winless in his last three fights, Antonio “Bigfoot” Silva has gone from number one contender to a fighter desperate for a victory in a relatively short amount of time. Silva has harnessed the power of the Sasquatch en route to 13 career knockouts, but he does leave himself prone to KO losses. A former heavyweight champion, Frank Mir has lost his last four fights.

Arguably the greatest heavyweight submission artist in UFC history, Mir has neglected his BJJ roots the last couple years. Let’s hope he’s watered those roots and provided plenty of sunlight, because I don’t see him having the striking output to stand toe-to-toe with Silva. Sadly, Mir most likely continues his horticultural malfeasance and attempts to charge right into the Bigfoot den (do Bigfeet live in dens?) and receives some power punches for his trouble. Silva by TKO in the first.

No matter what hemisphere you live in, that wraps up another heated edition of the Downes Side. Follow me on Twitter @dannyboydownes. Also, don’t forget to leave your own predictions, retorts, insecurities and favorite weather system on the page here. El Niño may be the sexy pick, but I’m going to go with Andrew Bird.