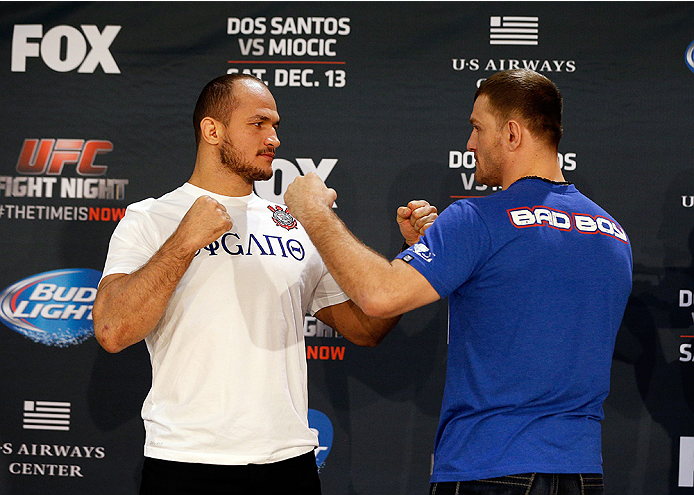 That’s right boys and girls, it’s time for another heavyweight edition of the Downes Side!

More fun than summer at Camp Hope, the UFC comes to Phoenix for UFC Fight Night on Saturday. The main event features former champion Junior Dos Santos returning to the Octagon for the first time since his second loss to Cain Velasquez. As he makes a run for another shot at the title, he’ll have to get through rising star Stipe Miocic. In the co-main event, #3 ranked lightweight Rafael dos Anjos tries to make a case for a title shot of his own against Nate Diaz. Save your PerkiSystem VHS’ for later, it’s fight time!

We begin in the heavyweight division (shock!) for Gabriel Gonzaga and Matt Mitrione. Holding a 4-2 record in his second stint in the UFC, over half of Gonzaga’s 24 fights have been decided in the first round. A veteran of the tenth season of The Ultimate Fighter, every single one of Mitrione’s professional fights have happened inside the Octagon. A powerful southpaw, seven of his wins have come via knockout.

Both of these fighters have knockout power. They both are also prone to defensive lapses. Bearing that in mind, I have to give the advantage to our pal Meathead. He has a higher work rate and better speed. He’ll strike first and set the tone for the fight. Gonzaga will reach for the takedown, but his below average success rate (45.1%) indicates that route may be a bit more difficult than he’d like. Mitrione by first round knockout.

We stay at heavyweight for Alistair Overeem and Stefan Struve. After losing three of his last four fights, some people are calling Overeem a bust in the UFC. An accomplished kickboxer and former Strikeforce champion, “The Reem” has finished 34 opponents during his illustrious career. Health issues have sidelined Struve and he returns to action for the first time since March of 2013. Standing 6-11 ½, the “Skyscraper” has a dangerous submission game to compliment his kickboxing.

Overeem is still a physically imposing fighter. He has a lot of offensive capabilities and a devastating clinch. The weaknesses have come in defense, specifically, his declining ability to absorb damage. Struve may have a better chin comparatively, but he has been knocked out five times in his career (four of them coming in the first round). Struve does not utilize his reach as well as he should, and he’ll take some damage early in the fight. As it progresses, though, Overeem will start to slow down and Struve will become stronger. The Skyscraper channels his inner John Spartan to win by third-round TKO.

We drop down to lightweight for the co-main event as Rafael dos Anjos faces Nate Diaz. After giving former champion Benson Henderson the first KO loss of his career, dos Anjos’ stock is as high as it’s ever been. A veteran of 16 UFC fights, he’s slowly evolved from a grapple-heavy fighter to one that’s dangerous everywhere. A heavyweight mean mugger, Nate Diaz has been out of competition for over a year. Everyone knows the Cesar Gracie fighter has no problem throwing hands, but 11 of his career wins have come by submission.

Nate Diaz excels when he can draw fighters into his game. He’ll need a lot more than taunts and a Stockton “Hey buddy!” to get dos Anjos off his game. Diaz will be the aggressor, but expect dos Anjos to counter effectively and even land a couple takedowns. Diaz has a dangerous guard, but it’s unlikely he’ll be able to submit the Brazilian. RDA sticks, moves, counter punches and wrestles his way to the decision win.

Time for the main event! After an unsuccessful attempt to take back his title from Cain Velasquez, Junior Dos Santos is ready to make his case for another opportunity at UFC gold. Known for his boxing, his spin kick KO over Mark Hunt at UFC 160 shows that “Cigano” has been adding some other weapons to his arsenal. Currently riding a three-fight win streak, Stipe Miocic may be Ohio’s best chance at a championship. Yeah, I’m talking to you, Ohio State fans.

JDS struggled with Cain’s pressure and pacing. Miocic can push a similar pace, but he doesn’t have the same level of wrestling as the heavyweight champ. He may shoot a couple double legs, but I doubt he’ll be able to finish them. Having said that, Miocic has the skill set to give JDS trouble. He may lack the one-punch KO power, but he’ll fight the same way in the final round as he does in the first. As long as Miocic avoids the early rush, he wears JDS down for the upset decision win.

That wraps up another Downes Side that even Goldberg couldn’t ruin. Follow me on Twitter @dannyboydownes. Also, don’t forget to leave your own predictions, comments, exasperations and favorite movie from 1995 on the page here. It’s so hard to choose one, but here’s mine.