That’s right, boys and girls, it’s time for another Canadian edition of The Downes Side. While I can’t promise it will be as surprising as finding out Brock Lesnar will represent Canada at UFC 200, it might be as shocking as learning Seth Rogan is Canadian.

Live from the TD Place Arena in Ottawa, Ontario, Rory MacDonald resumes his path toward UFC gold as he takes on the “Wonderboy,” Stephen Thompson. We’ll be looking at that fight as well as three others featuring Canadians seeking to do their countryman Ryan Gosling (Seriously? Him too?) proud.

We open in the lightweight division with Jason Saggo and Leandro Silva. Canadian up and comer Saggo suffered a split decision loss to Paul Felder, but he came back with a first-round TKO over Justin Salas at UFC 196. A Brazilian Jiu-Jitsu black belt under Royler Gracie, eight of his career wins have come via submission. Better known as “Buscape,” the southpaw Silva tries to run his win streak to three after back-to-back wins over Efrain Escudero and Lewis Gonzalez.

Saggo is at his best in the top position. He values position over submission, and strikes when his opponents are vulnerable. When it comes to his standup, there are some concerning tendencies. Especially against Salas (another southpaw), he retreated his kicks in a lazy manner. Now that could be a technical flaw, or it could have been a tactic to draw Salas into going for the takedown. When you’re a BJJ black belt, you don’t mind giving up a takedown instead of exposing yourself looking for your own. Silva can overwhelm Saggo with pure output due to Saggo’s plodding footwork. Saggo may not be light on his feet, but he does cut angles well and applies pressure. And pressure is one thing Silva can’t handle. Saggo starts slow, but he’ll eventually back Silva down, finish the takedown and lock up the second-round submission.

We move to women’s flyweight for Valerie Letourneau and Joanne Calderwood. “Trouble” Latourneau saw her four-fight win streak ended by Joanna Jedrzejczyk. A durable fighter, she’s started to lean on her grappling more instead of using toughness as her primary defense. Scotland’s favorite fighting daughter since Lady Agnes Randolph, Calderwood bounced back from the only loss of her career to Maryna Moroz with a unanimous decision over Cortney Casey last July.

Both fighters have a common opponent in Moroz. Letourneau beat her by decision while Calderwood lost by first round armbar. MMA Math is a fun website, but it’s not something I take seriously. In that way, it’s very similar to buying office supplies at Pen Island’s website. The difference maker here will be the clinch game. Specifically, if Calderwood can initiate it. Letourneau’s counter boxing (especially her right hand) can give Calderwood a lot of problems since she defends significant strikes at a 45.96% rate. What’s in her favor is that she has a far greater work rate and Letourneau’s relative inaccuracy. Calderwood won't leave the fight unscathed, but she uses her clinch and inside en route to a unanimous decision upset.

Next, we move to welterweight for Donald Cerrone and Patrick Cote. Cerrone lost to lightweight champion Rafael dos Anjos, but got back to his winning ways by first-round triangle choke against Alex Oliveira. Known for his fan friendly fight style, he uses his strikes to stun opponents and then lock up opportunistic submissions. A powerful striker who’s made the most of his latest UFC stint, Cote has won four of his last five.

The big question mark here is how Cerrone will handle the power of opponents at welterweight. Yes, it’s technically his second straight fight at 170 pounds, but Oliveira was a natural lightweight taking a fight on short notice. Even then, Cowboy #2 was still able to push him against the fence and hold him. Cote doesn’t necessarily have one-punch power, but he’s very strong in the clinch and wears opponents down over the course of a fight. He does tend to get carried away mid-combination and leads with his chin. This is where Cerrone can succeed. Cowboy’s takedowns are more timing-based than pure skill or technique. He can catch Cote rushing and put him down, regardless of the size difference. Cote certainly has a path to victory by keeping the fight against the fence, but his aggressiveness will be his downfall. Cerrone by third-round submission.

Time for the main event! Rory MacDonald returns to the Octagon for the first time since his 2015 fight of the year against Robbie Lawler. We all know how much skill he has, but a fight like that can change a fighter for the rest of his career. The awkward karate kid everyone picked on before Sage Northcutt, Stephen Thompson looks to keep the momentum going after his impressive first-round TKO over former champion Johny Hendricks. 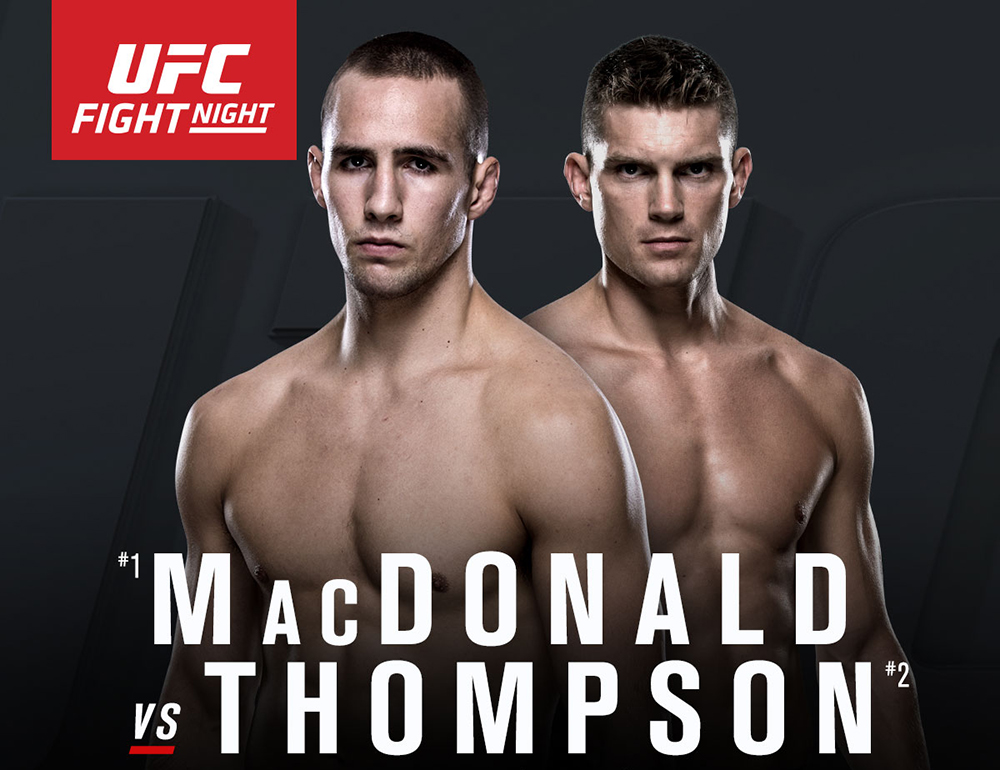 Rightly or wrongly, we tend to overestimate how a fighter looked in their last fight. In Thompson’s case, he was so sharp against Hendricks that it seems inconceivable that he’ll ever lose again. Thompson’s leg dexterity and command of distance are impressive, but that’s not to say he’s without flaws. The key to MacDonald winning this fight is to make it a boxing match. Thompson punches very well, but he doesn’t box well. Especially when opponents crowd him, he doesn’t modify his stance and he leaves himself open. Matt Brown beat him with it and Patrick Cote was able to do the same even though he eventually lost by decision. MacDonald is disciplined and won’t come in rushing against Wonderboy like Hendricks. He’ll take his time, work his jab and he might even lose the first round or two. As Thompson fades, MacDonald will start to turn it on, take the inside and let his hands fly. He might even throw in a takedown or two. MacDonald by decision.

That wraps up another peanut butter smooth edition of the Downes Side (Yup, Canadians get credit for that, too). Follow me on Twitter @dannyboydownes. Also, don’t forget to leave your own predictions, musings, life quandaries and other unlikely Canadian facts on the page here. Swedish fish? You better believe that’s Canadian.