That’s right, boys and girls, it’s time for another memorable edition of The Downes Side. As our American friends spend the Memorial Day weekend grilling whatever meat you find inside hot dogs, everyone else can grill me in the comments section.

This weekend, the UFC presents some matches that could offer more surprises than that weird potato salad your aunt brings. The main event features two undefeated bantamweight prospects trying to make their big jump on to the big stage, as Thomas Almeida and Cody Garbrandt have only two decision wins between them in nearly 30 fights.

We’ll start on UFC FIGHT PASS with Aljamain Sterling and Bryan Caraway. Undefeated (including 4-0 inside the Octagon) “Funk Master” Sterling fancies himself the next rising star in the 135-pound division. He’ll lend a lot of credence to that belief with a win over Caraway. A WEC vet with a 5-2 record inside the Octagon, Caraway comes off a unanimous decision win over Eddie Wineland.

Both fighters are grapplers first and foremost, but each one’s striking is underrated in different ways. Sterling switches his stance often, but he has tells in each one. He prefers kicking from southpaw and is a far better boxer in orthodox. He’s very purposeful in his attacks and tends to intermittently sprint attacks (think Lyoto Machida) as opposed to producing high volume. Caraway plods on his feet a bit more, but is a better counter striker. Especially when you watch the Wineland fight, he kept pushing forward and wouldn’t let his opponent get comfortable. If he can maintain that same attack, he could neutralize Sterling’s kicks. Ultimately, this boils down to transitions. Sterling is better at each individual discipline, but Caraway strings his grappling to striking and vice versa much better. Bad news for the Caraway haters, but he takes this one by unanimous decision. 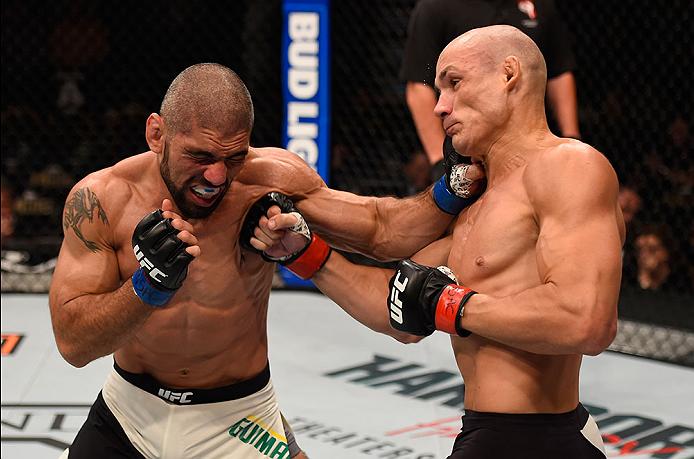 We move to middleweight for Chris Camozzi and Vitor Miranda. Camozzi has quietly put together a nice streak, having won four of his last five. His last time out he busted out a barrage of knees to defeat Joe Riggs in 26 seconds. A former TUF Brazil contestant at heavyweight, Vitor Miranda has a three-fight win streak of his own to maintain.

Both fighters are very traditional Muay Thai strikers. It will be interesting to see how they fare in a striking contest because all their recent opponents have been more concerned with taking them down. At distance, Miranda is a more effective kickboxer. He has a lot of pop in his combinations and doesn’t slap his jab like Camozzi. In tight, Camozzi looks to have the advantage. He prefers to clinch opponents, and even though he’s been knocked for a perceived lack of power, he does control opponents against the fence. His reliance on the clinch will be his downfall, though. Miranda’s defense going backward is suspect, but Camozzi usually reaches for the “plum” when he gets opponents retreating. Miranda’s openings come from uppercuts and tight punches, not knees. Miranda scores enough on the outside and avoids damage inside to take the unanimous decision.

That brings us to the featherweight division for Renan Barao and Jeremy Stephens. Barao makes the transition to a new weight class and hopes to have similar success at 145 as he did at 135. He lost his rematch against TJ Dillashaw last July and is on a redemption tour. Stephens looks to extend the former champ’s slide while stopping his own. A powerful puncher with 16 career KOs, he’s dropped three of his last four.

I would be very surprised if this fight went the distance. Both fighters prefer to stand in the pocket and unleash power shots, and it sure seems like each will oblige the other. Much has been made of TJ Dillashaw’s footwork and speed. Those certainly helped him beat Barao, but there was a larger factor – efficiency. Whether it was his jab or overhand right, Dillashaw took the quickest route to contact. Jeremy Stephens could be the hardest hitter in the division, but he’s not the most efficient. Especially as a fight progresses, his punches become wider and he loads up on them. Now, if one of them connects, it’s lights out, but there’s not a lot of subtlety. Barao does stick his chin out there and isn’t the most accurate striker in his own right (he connects on 34.34% of his significant strikes), but low kicks and left hooks lead him to a second-round TKO.

Time for the main event! Thomas Almeida has been dubbed the next Brazilian star. His 4-0 start in the Octagon (three of them finishes) has been a strong indicator thus far. Sixteen of his wins have come in the first round, so he’s not exactly the type of fighter that “feels things out.” Cody Garbrandt is another fighter who is no stranger to KO wins. He’s 3-0 inside the UFC and “No Love” doesn’t fear opponents or tattoo needles.

This is a kickboxer vs. pure boxer type of fight. Almeida keeps a tight Muay Thai guard and counters effectively with his right hand. Garbrandt has a looser guard, but has a bit more explosiveness in his strikes. He counters, but seems more comfortable pushing forward and connecting with big hooks. Almeida shows a lot of patience for a young fighter. He lets opponents come at him in the opening frame and show their cards. He picks up on their timing and then starts to find a home for his strikes. The problem, though, is that patience can often cross the line into inactivity. Letting someone like Garbrandt take the initiative can lead to defeat. This fight will play out very similar to Almeida vs. Pickett. The Brazilian will get hurt early, but he’ll regain his ground. Then in the second round, he’ll start landing his right hand and close out with some ground-and-pound for the second-round TKO.

That wraps up another fiery edition of the Downes Side. Follow me on Twitter @dannyboydownes. Also, don’t forget to leave your own predictions, comments, praises and favorite BBQ side dishes on the page here, too. I just hope nobody says coleslaw.