When life gives you lemons, make lemonade and enjoy another thrilling edition of the Downes Side!

We may not have a heavyweight championship fight, but there will be plenty of MMA action to whet your whistle this weekend. Live from the MGM Grand Garden Arena in Las Vegas, former welterweight champion Johny Hendricks tries to climb his way back to title contention against Stephen “Wonderboy” Thompson. The co-main event pits Jared Rosholt against Roy Nelson in a heavyweight bout. Who needs a contingency plan? It’s fight time! 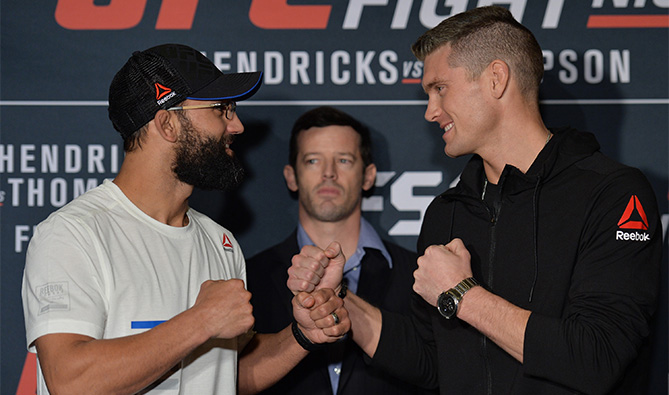 Time for the main event! After losing his welterweight title to Robbie Lawler at UFC 181, “Bigg Rigg” Hendricks bounced back with a decision win over Matt Brown in March. Some weight management issues forced his planned bout against Tyron Woodley to be canceled, but a leaner, meaner Hendricks wants to make up for lost time. Stephen “Wonderboy” Thompson has leaned on his karate and strong takedown defense to propel him to five straight victories.

We tend to put traditional martial artists in the UFC into the same bag. Each fighter is as unique as individual Muay Thai fighters. Thompson likes to attack in explosive combinations. There may not be a lot of volume, but he doesn’t attack in single devastating strikes the way that Lyoto Machida does. For that reason, I don’t like him against Hendricks. Hendricks’s wrestling and pressure will either cause Thompson to be tentative or put Wonderboy into bad positions. Hendricks knows that he needs to look dominant to get back into the title picture after his weight gaffe. Hendricks by decision. 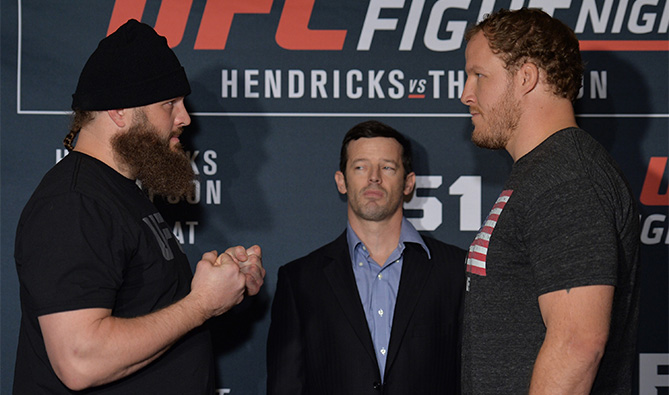 We jump to heavyweight for the battle of the big men. America’s favorite portly puncher outside Elvis Presley in a karate outfit, Roy Nelson has had a rough go if it as of late. He’s lost five out of his last six, including three straight. Rosholt, on the other hand, holds a 6-1 record in the Octagon has won three in a row. A successful collegiate wrestler, he’s struggled to adapt it to MMA and only converts 44.83% of his takedowns.

Dynamic isn’t exactly a word you’d use to describe either one of these fighters. Both of them have their strengths and they go to that well as often as possible. Nelson has his right hand and Rosholt has his wrestling. Which one will win out? My money is on Rosholt (actually it’s not because of those damn Globetrotters). Rosholt has above average defense and is smart enough to know his path to victory. He takes it by unanimous decision. 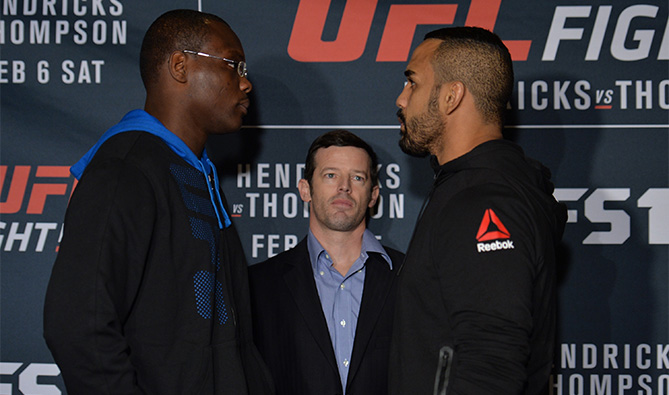 We return to light heavyweight for Ovince Saint Preux and Rafael Feijao. One of the hottest prospects in the division, he lost a little ground after his submission loss to Glover Teixeira in August, but he still has a lot of upside and remains one of the most dangerous fighters in the division. Feijao is another fighter who is searching for some momentum. A brutal knockout artist, he’s lost three of his last four and needs a win here.

Feijao has more pure knockout power, but I don’t see how he hangs with OSP. Feijao has questionable conditioning, and facing Saint Preux magnifies those issues even more. As long as OSP doesn’t try to go blow for blow with his opponent, he should cruise. OSP trades a few punches, then as Feijao slows down, he’ll move for the takedown and ground and pound his way to the second round TKO. 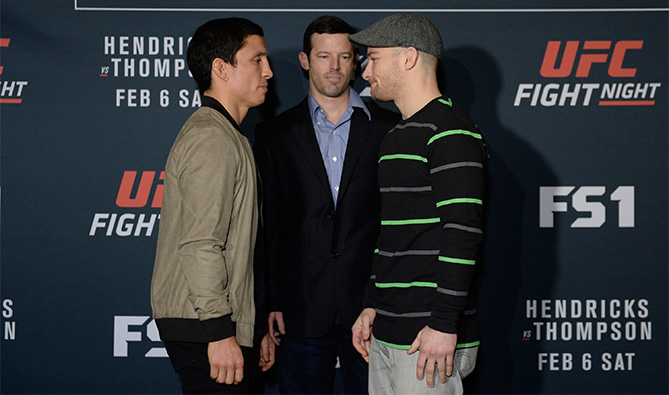 Next we drop to flyweight for Joseph Benavidez and Zach Makovsky. Benavidez has won four straight fights since his loss to Demetrious Johnson and makes the case for a third shot at the title. His power and “Joe Jitsu” has earned him nine submissions. Add that to his power punching, and there’s no surprise as to why he’s the #1 contender. “Fun Size” Makovsky is another well-rounded fighter who could jump to the front of the line with a win.

The Nostradamus of MMA cheers for the underdog. That’s why I laid down a lot of money on the World All-Stars when they played the Harlem Globetrotters this past week. I mean, they’re the World All-Stars. How could they lose? Plus, if you think MMA refereeing was bad, you should have seen the Globetrotter game. They violated so many rules and the officials did nothing. Plus, how do you not just take the ball from a guy spinning a ball on his finger? Anyway, Benavidez wins by submission in the first round.

We move to light heavyweight for Misha Cirkunov and Alex Nicholson. A Latvian powerhouse with eight first-round finishes, Cirkunov is coming off a successful UFC debut in August, when he KOd Daniel Jolly. Alex “The Spartan” Nicholson is hoping for similar success as he makes his debut. All his wins have been finishes (5 TKO, 1 submission) and he calls himself “The Spartan.” After 300, what movie do you think has spawned the most MMA nicknames? Think there’s anything by Ingmar Bergman? How great would it be to see someone nicknamed “Wild Strawberries?”

We don’t know a lot about either one of these fighters. They have a lot of finishes and a lot of talent. When evaluating fights like this, you have to look at who has 1) had better competition and 2) who has showed more poise. Misha Cirkunov fulfills both these criteria. Young / inexperienced fighters often get themselves in trouble because of recklessness. Nicholson has a higher recklessness quotient (patent pending). Cirkunov sits down and delivers the first round TKO.

We start the main card in the welterweight division with Mike Pyle and Sean Spencer. A high-level grappler who’s found some of that old man strength in his hands, the 40-year-old Pyle has lost a lot of the momentum he once had. He’s lost three of his last four and needs to get back on track. Sean Spencer is 3-3 in his UFC career and has an active striking style. He lands 4.46 significant strikes per minute, but only lands just over 35% of the time.

The 40-Year-Old MMA Fighter might be a terrible idea for a movie (although Kevin James is actually 50 years old), but it works for Mike Pyle. Yes, he hasn’t had much success and you always worry about an older fighter’s chin, but I still have faith in ol’ Quicksand. Spencer throws a lot of punches that don’t have any purpose. Pyle is savvy enough to avoid the wild strikes and find an opening of his own. He sharpshoots his way to a second round TKO.

That wraps up another alternative version of the Downes Side. Follow me on Twitter @dannyboydownes. Also, don’t forget to leave your own predictions, thoughts, concerns, life aspirations and cocktail of choice on the page here. Personally, I’m a Boulevardier guy.