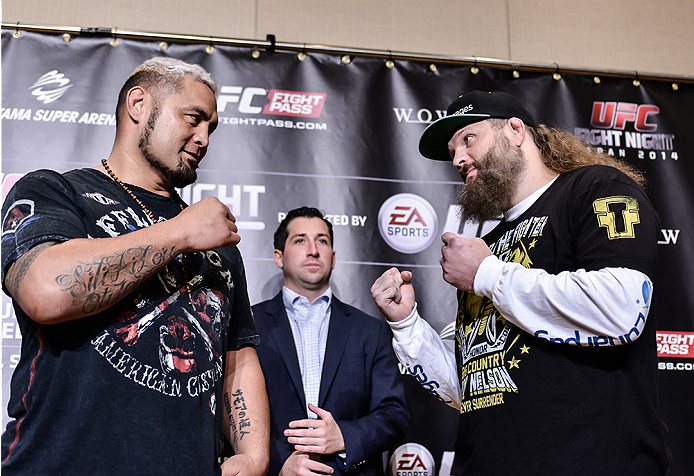 That’s right boys and girls, welcome to the land of the rising IQ, aka the Downes Side! Sure there may be a 16 hour difference between Japan and San Diego, but what harm could sleep deprivation do? Oh I see. Screw it. I’m watching them anyway.

No matter what time zone you reside, make it a point to check out UFC Fight Night this week. The main event of the evening or morning or afternoon is a heavyweight clash between two guys that throw more beef around than your local butcher. Both firmly planted in the top 10 of the division, Mark Hunt and Roy Nelson try to climb the rungs a few steps further. In the co-main event of the night, the ever humble Myles “Fury” Jury steps into the Octagon against Japanese superstar and MMA legend Takanori Gomi. Order takeout for breakfast/lunch/dinner, it’s fight time!

We open in the flyweight division with Kyoji Horiguchi and Jon Delos Reyes. A rising prospect in the 125-pound weight class, Horiguchi is undefeated in his short UFC career with wins over Dustin Pague and Darrell Montague. Solid everywhere, eight of his 13 wins have come via KO. After a first-round submission loss to Dustin Kimura in January, Guam’s Reyes needs to show he belongs with the world’s best.

Reyes may have the athletic advantage, but he’s still raw. It seems counterintuitive, but Horiguchi is the much more refined fighter despite being four years younger. Reyes will have early success on the feet, but Horiguchi will eventually finish the takedown. Once he takes top position, the ground and pound will soon follow. Horiguchi by first-round TKO.

We move to welterweight for Kiichi Kunimoto and Richard Walsh. Winner of six in a row, Kunimoto scored an impressive victory at UFC 174 with a first-round rear naked choke over Daniel Sarafian. An alum of TUF Nations, “Filthy” Richard Walsh has won six of his last seven. He started his official UFC career off well with a decision win over fellow Australian Chris Indich.

Not only is Kunimoto a member of the Cobra Kai gym, he also likes to dye his hair blonde. That essentially makes him William Zabka’s character in The Karate Kid. While we’d all like to see him sweep the leg and pick up the victory Sensei Kreese rightly deserves, he’ll have to wait. Walsh may not be as polished as his opponent, but he’s more relentless and physically stronger. Walsh will get on the inside and make this ugly. He’ll push Kunimoto against the fence, attack in the clinch and pummel his way to the decision win. After picking up his win, Walsh will make the short trip to Okinawa, Japan to attend the Obon festival.

That brings us to the women’s bantamweight division for Miesha Tate and Rin Nakai. After her second loss to Ronda Rousey, “Cupcake” Tate bounced back with a unanimous decision win over Liz Carmouche in April. Relentless with her takedowns, Tate does tend to get reckless with her offense. Extremely popular in Japan due to YouTube videos like this, Nakai is out to prove she can do a lot more than...uh...vacuum a ring?

Nakai packs a lot of power in her 5’1” frame. She utilizes judo throws and a smothering top game. She doesn’t deal well with pressure, though. Unfortunately for Nakai, that’s what Tate does best. She’ll charge forward and make Nakai uncomfortable. The takedowns won’t be there early, but as long as she avoids prolonged clinching, Cupcake takes this one by unanimous decision.

We return to welterweight for a couple long overdue returns. The people demanded more Sexyama, and he has granted our wish. Even though Japan’s Surgeon General banned him from competing because his handsomeness caused an unprecedented spike in heart attacks, a countrywide referendum vetoed that ruling [editor’s note: none of this is true]. While he may not cause cardiac disease, Amir Sadollah comes back after a lengthy layoff of his own. A technical Muay Thai striker, he hasn’t stepped inside the Octagon since his decision loss to Dan Hardy in September of 2012.

Given both fighters’ relative inactivity, there’s no way to tell how this will go (except for the way I’m about to tell you). Sadollah has the clear striking advantage, but his attack could be stifled by Akiyama’s judo and grappling. As long as Sadollah avoids the initial rush, he should be fine. Sexyama may cause heart problems, but he also has cardio issues of his own to worry about. Sadollah will kick at a distance and use his footwork to avoid grappling. He hasn’t shown knockout power in previous fights, so expect him to take the unanimous decision.

We drop down to lightweight for Myles Jury and Takanori Gomi. Even though he doesn’t know what the word cocky means, Jury does know how to fight. Undefeated, with 11 of his career wins coming by finish, Jury is the total package. He has fluid striking and blends it seamlessly with his ground game. He’ll need all those tools at his disposal against Gomi. A former PRIDE champ, the “Fireball Kid” showed he still has something in the tank after beating Isaac Vallie-Flagg at UFC 172.

Gomi may have some embers burning, but Jury is the real fireball in this fight. He refused to brawl with Diego Sanchez his last time out, and he will use the same strategy against Gomi. Jury will attack at range and circle away before Gomi can land any big punches. Then, as Gomi gets impatient and rushes in, Jury will finish the takedown (which he converts at a 70.59% rate). Cocky or not, Jury will be effective and win by third round submission.

Time for the main event! Mark Hunt’s improbable UFC run continues as he tries to finish the man they say can’t be knocked out (except for that one time I guess). At 40 years of age, Hunt needs to make his mark now after going winless in his last two fights. After consecutive losses to Stipe Miocic and Daniel Cormier, “Big Country” Nelson showcased his KO power with a first round knockout of Antonio Rodrigo Nogueira in April.

We keep hearing about how Roy Nelson is a great grappler. He has the accolades and the awards, but he’s never used those skills inside the Octagon. He seems perfectly content to stand and throw some bungalows. Is it entertaining? Sure. Is it a total tactical mistake in this fight? Absolutely. Nelson can knock people out, but he has many defensive striking lapses. Couple that with his questionable cardio, and this is Hunt’s fight. The Super Samoan may not be running marathons any time soon, but he’ll fare better than Nelson and win on the judges’ scorecards.

That wraps up another luminous edition of the Downes Side. Follow me on Twitter @dannyboydownes. Also, don’t forget to leave your own thoughts, excogitations, contemplations and obfuscations on the page here. I’ll start.