That’s right, boys and girls, it’s time for another Texas-sized edition of The Downes Side! This week, the UFC makes its debut in Hidalgo for an Ultimate Fight Night. Hidalgo claims to be the “killer bee capital of the world” (not the Wu Tang Clan), but they won’t be the most dangerous things inside the city limits when Michael Johnson and Dustin Poirier square off. We’ll analyze that fight and others.

We start in the featherweight division with Gabriel Benitez and Sam Sicilia. A semifinalist on the first season of The Ultimate Fighter Latin America, Benitez is a hard kicking southpaw who holds a 2-1 record inside the Octagon. With six career knockouts and nine submissions, he’s ready to get back to his winning ways after a loss to Andre Fili in November. A veteran of 10 UFC fights, Sicilia looks for revenge of his own after a suffering a TKO loss to Dooho Choi.
WATCH: Sam Sicilia has Dynamite Hands

Sicilia is a high risk, high reward type of fighter. He throws some serious power shots, but he neglects to think about counter strikes. A highly aggressive boxer, he’s a classic bully type fighter. He pushes opponents around and tries to physically overpower them. There are two ways to beat Sicilia. Drop him with a counter punch, or stick and move. Outside regional promotions, Benitez hasn’t shown one-punch KO power. Also, he stands too upright, relying on single shots for the second strategy to work. Sicilia’s tenacity often places him in harm’s way, but his fists should lead him to a second round TKO win.
MORE FROM HIDALGO: By the Numbers | Fantasy Cheat Sheet | Reasons to Watch

Next we move to lightweight for Evan Dunham and Rick Glenn. Dunham made his debut in 2009 at UFC 95 (Diego Sanchez beat Joe “Daddy” Stevenson in the main event). Don’t think that makes him an old timer, though, as he’s won three straight fights. He’ll try to run that streak to four as he takes on former World Series of Fighting champion Rick “Gladiator” Glenn. Winner of nine out of his last 10, only two of those fights have gone to decision.

Dunham has steadily improved his striking lately, but he still has a number of openings. He likes to have space and seems to struggle when pressured. Defensively, he has strong head movement, but he can still loop a lot of his punches. He doesn’t have a lot of flashy strikes, but it gets the job done. Can Glenn overcome this? I think so. I worry about Dunham’s size advantage (Glenn has been fighting at featherweight), but Dunham’s weakness inside the clinch could provide an opportunity. Glenn crowds Dunham and makes this an ugly fight. Dunham tends to attack in predictable patterns and Glenn grinds one out for the upset decision victory. 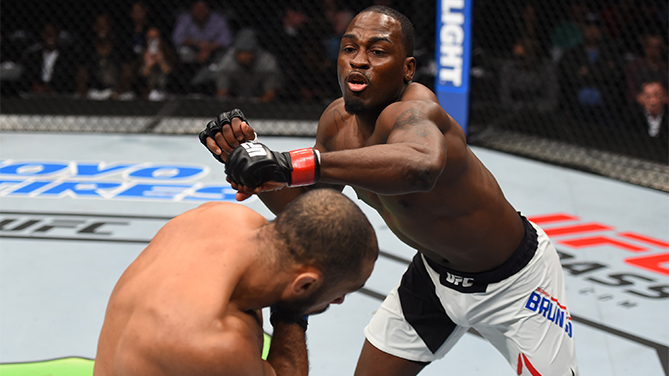 That brings us to middleweight for Uriah Hall and Derek Brunson. One of the most highly anticipated prospects to ever come off The Ultimate Fighter, Hall has been inconsistent throughout out his career. He looked to be getting back on track with back-to-back wins (including a vicious flying knee TKO of Gegard Mousasi), but Robert Whittaker ended that momentum at UFC 193. Derek Brunson has some hype behind him, too, and could make his big jump with a victory. He’s won four straight, including three by first round knockout.
KO of the Week featuring Uriah Hall | Time to pay attention to Brunson

Hall has the ability to finish a fight in an instant. That’s in part to his athletic prowess, but also because of his ability to recover. Even when he sustains damage, he bounces back quickly. But even with all his talent, he consistently makes the same mistake – inaction. His lack of volume and tendency to wait rounds away have been his biggest weakness. Brunson may not have the physicality of Hall, but his skills do make this a favorable matchup. Brunson pressures opponents and likes to attack in the clinch. He also has the wrestling pedigree to take Hall down, and “Primetime” does not do well off his back. Brunson’s tendency to stick his chin out as he attacks is worrisome, but Hall’s offense comes from his kicks more than his punches. As long as Brunson keeps enough gas in the tank, he wins by decision.

Time for the main event! Once one of the top featherweights in the world, Dustin “The Diamond” Poirier now sits as the No. 7-ranked lightweight in the UFC. He’s won four fights in a row, including first round finishes of Yancy Medeiros and Bobby Green. Michael Johnson’s recent four-fight win streak seems like ancient history after two straight losses to Nate Diaz and Beneil Dariush.

Dustin Poirier has always been a tremendous finisher, but he has improved his ability to strike defensively. Not in the sense of being timid, but by being able to attack and protect himself simultaneously. Instead of charging headlong like he used to, he protects his chin and avoids damage. All that goes out the window once he smells blood, though. Johnson’s main advantage here is speed. When he decides to strike, he hits opponents with punches and kicks at all different levels. The reason he needs the speed, however, is because he rarely attacks in straight lines. His left hand looks more like someone throwing a fastball than a traditional punch. This approach often leads him to over-punching and he tires himself out. Poirier will struggle with the speed differential early. As the rounds progress, Johnson will slow down and Poirier will start to pour it on. Poirier continues his streak with a third round TKO.

That wraps up another Downes Side that’ll make you Hidal-go tell your friends. Follow me on Twitter @dannyboydownes. Also, don’t forget to leave your own predictions, thoughts, analyses and favorite sight at the Old Hidalgo Pumphouse and World Birding Center. I’m partial to the groove-billed Ani.