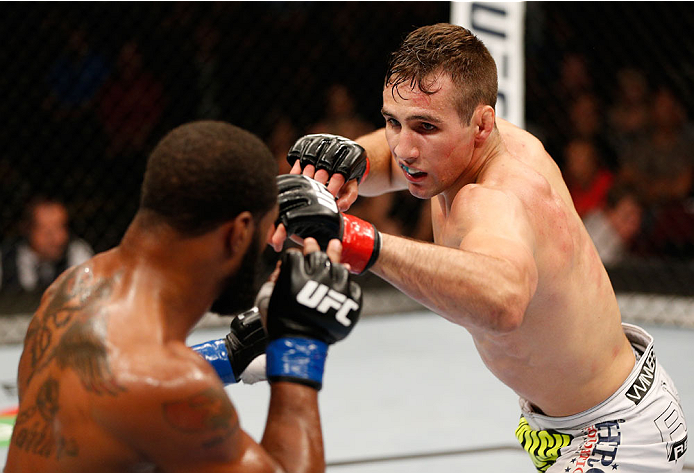 That’s right boys and girls, it’s time for another Canadian version of the Downes Side! This time we’re heading to Halifax, Nova Scotia, aka the birthplace of Sarah McLachlan. With all these closely contested fights, you might think that the UFC is building a mystery, but don’t worry Adia, we’ll make it.

If you’re the type of person more interested in fighter’s fists than the arms of an angel, you’re in the right place. Live from the Scotiabank Centre, the main event of the night could determine the next welterweight title contender as Rory MacDonald takes on Tarec Saffiedine. In the co-main event of the evening we have another potential title contender as Raphael Assuncao and Bryan Caraway compete. Now’s not the time for a sweet surrender, it’s fight time!

We open in the bantamweight division for Mitch Gagnon and Roman Salazar. Winner of three straight in the Octagon, Canadian submission specialist Gagnon has earned 10 of his career victories via tap out. Stepping in on short notice, Roman “El Gallito” Salazar has finished five opponents in the first round by both TKO and submission.

It’s easier to dig up footage on the Loch Ness Monster than Roman Salazar. While I think we can all assume that Nessie is out there somewhere, it’s hard to know where Salazar stands (or swims). We may not have “scientific” proof, but you have to trust in Mitch Gagnon. After gauging Salazar’s power, he’ll move in for the takedown, advance position and secure the first round submission.

We move to middleweight for Nordine Taleb and Li Jingliang. After two separate stints on The Ultimate Fighter, Tristar product Taleb earned a unanimous decision victory over TUF castmate Vik Grujic in April. A well-rounded fighter with tremendous cardio, patience isn’t a virtue for him. Too often, he allows his opponents to dictate the pace and control the engagements. Living up to his nickname, “The Leech” Li Jingliang successfully debuted at UFC 173 with a split decision over David Michaud.

Taleb is one of those fighters that has all the potential, but can’t seem to put it together. Despite that, he should pull this one out. Li succeeds when he can smother opponents and slow things down. Taleb may stall in the middle of rounds, but his footwork and superior technique should propel him to the unanimous decision.

We stay at middleweight for Elias Theodorou and Bruno Santos. Winner of TUF Nations and number one fan of Elias Theodorou, “The Spartan” has the pure athleticism and wrestling to make waves in the division. A grinder with 12 of his career victories by decision, “Carioca” Santos overwhelms opponents with raw power.

Santos wants to bring this fight to the ground. He’s relentless in the pursuit of the takedown, but he only succeeds 27.78% of the time. Couple that with a low striking output, and he has the odds stacked against him in this fight. As long as he doesn’t get distracted by his own reflection and winds up on his back, Theodorou takes the unanimous decision.

We move to lightweight for Chad Laprise and Yosdenis Cedeno. After winning TUF Nations at welterweight, “The Disciple” Laprise makes his debut at 155 pounds. He may be one step closer to his “fight church” dream but chances are he’ll be a couple steps behind once he meets with a copyright lawyer. A technical striker with solid takedown defense, he has the type of one-punch KO power that can alter a fight. We may not know what type of ministry “The Pink Panther” Yosdenis Cedeno wants to open, but we do know that it will involve knockout power.

Cedeno is an all or nothing striker. He throws every shot with bad intentions, but doesn’t produce much volume. If he connects with one of his punches, he can finish the fight in the first round. Laprise does have defensive gaps, but Cedeno won’t be able to exploit them. Laprise avoids the initial onslaught and counter attacks to win by second round TKO.

We drop to bantamweight for Raphael Assuncao and Bryan Caraway. Winner of six straight (including one over current champion T.J. Dillashaw) Assuncao believes that he should be the next contender for the 135-pound title. He can make a case here with a win over Bryan “Kid Lightning” Caraway. Holding a 4-1 record in his UFC stint, 19 of his career victories have come via submission.

Both men are primarily grapplers, but Assuncao has steadily improved his striking game. Caraway has made adjustments of his own, but his strikes are still more of an afterthought to the takedown. Caraway will try to smother Assuncao against the fence, but the Brazilian’s superior strength will prevent that from happening. Caraway will reach for the takedowns, but the only thing he’ll grab is a unanimous decision loss.

Time for the main event! When he’s not busy picking out handkerchiefs to match his ties, “Ares” MacDonald has been expected by many to take the throne that Georges St-Pierre abdicated. After losing to Robbie Lawler, MacDonald bounced back with two straight wins over Demian Maia and Tyron Woodley. Hampered by injuries the last few years, Tarec Saffiedine can immediately make a mark on the division with a win here.

MacDonald is a hard fighter to read. And not just because he doesn’t change his facial expressions much. He has all the talent to be champion, but is prone to losing rounds due to inactivity. The deciding factor here will be wrestling. Saffiedine has strong defense, but MacDonald knows how to time opponents’ kicks and transition to the takedown. Once he takes top position, I don’t see how Saffiedine threatens off his back or gets back to his feet. MacDonald wins by decision.

That wraps up another ASPCA approved edition of the Downes Side! Follow me on Twitter @dannyboydownes. Also, don’t forget to leave your own thoughts, considerations, predictions and Lilith Fair memories on the page here. Hard to compete with that Indigo Girls double encore in 1997.