That’s right, boys and girls, it’s time for another Chicago edition of the Downes Side! While I love the place of my birth, it’s usually a place for division. Countless arguments over the thickness of pizza crust or whether to put ketchup on a hot dog have the Windy City as the focal point. Once a year, though, we get to unite under something we can all appreciate – professional mixed martial arts.

This weekend, the UFC rolls into the United Center for a stellar card on FOX. The main event takes place in the women’s bantamweight division, as Holly Holm begins her path to another title shot when she faces Valentina Shevchenko. Let’s take a closer look at that fight and a few others to keep your eyes on. 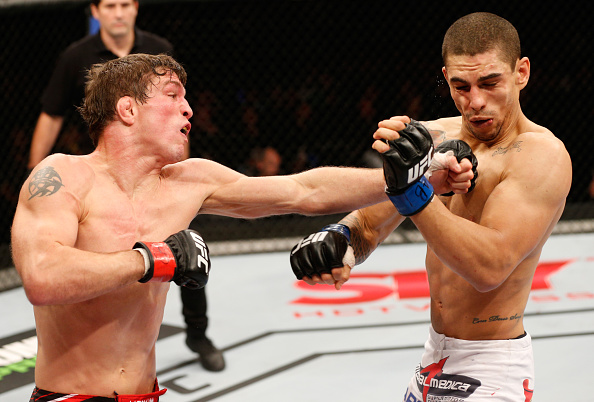 We start in the featherweight division with Darren Elkins and Godofredo Pepey. Elkins’s recent move to Team Alpha Male has paid dividends. He’s won his last two fights over Chas Skelly and Robert Whiteford and looks to run that streak to three in a row. After losing three of his first four UFC fights, Pepey is another fighter who has turned things around. He has three straight first-round finishes, including a submission win over TAM’s Andre Fili his last time out.

These are two very different fighters. Pepey is low volume, but he goes for home runs. Flying knees, spin kicks and jumping submission attacks are but a few of the techniques he’ll unleash. Elkins, on the other hand, is a grinding wrestler who commentators would call “workmanlike.” He clinches, searches for bodylock takedowns and wears opponents out over the course of a fight. Elkins uses his cardio as a weapon, but seeing that Pepey hasn’t been out of the first round in his last five fights, it’s hard to see how the Brazilian will react. While Elkins is effective at smothering opponents, he does absorb a lot of damage on the way in. He has the clear wrestling advantage, but Pepey is very dangerous off his back. Elkins will get hurt as he tries to push Pepey against the cage. Stunned, he’ll go for the takedown to give himself time to recover, but he’ll find no quarter. Pepey by first-round armbar.

We drop to bantamweight for Frankie Saenz and Eddie Wineland. Even though his name sounds like a character from the Sopranos, Saenz could be someone to watch at 135 pounds. He may have lost his last fight to Urijah Faber, but he showcased a wide range of skills. A former WEC champion, Eddie WIneland tries to find his old form after dropping three of his last four.
RELATED CONTENT: The Matchup - Saenz vs Wineland | Fighter Bios - Saenz | Wineland

Wineland has a very unorthodox striking style. He keeps his hands low and moves in irregular, staccato bursts. It helps him avoid damage (he defends over 70% of significant strikes), but it makes him wildly inaccurate (he only connects on 28.81% of them). He’s still physically strong, but he doesn’t bully fighters like he used to. Saenz’s wrestling is his best attribute, but he weathered Faber’s attacks and should be able to do the same here. As Bryan Caraway showed in his fight with Wineland, a couple well-timed takedowns will make the former champ cautious. I expect Saenz to follow the same playbook en route to a unanimous decision victory. 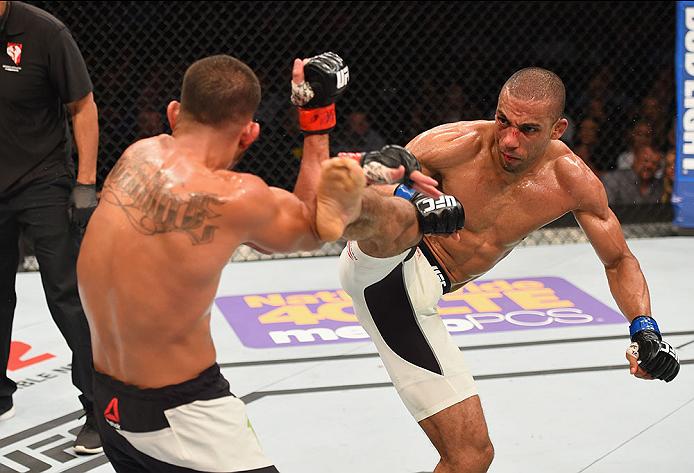 That takes us to the co-main event of the night. Edson Barboza is always entertaining, but he’s been inconsistent. He’s coming off a big win against Anthony Pettis and could finally turn the corner with a win here. Gilbert Melendez has lost his last two fights to Anthony Pettis and Eddie Alvarez. He’s also stepping into the Octagon for the first time since serving a year suspension for a failed drug test. He thought his best days were behind him, but now that Alvarez is at the top of the lightweight division, he feels that the MMA gods are talking to him.

READ: Melendez talks about "busting up" Eddie Alvarez
Melendez has tight boxing and solid defense, but he doesn’t want to test it against Barboza. The plan Melendez used against Pettis would be his best course of action. Crowd him so he can’t get his devastating kicks off and look for the takedown against the fence. Melendez stands heavy in his stance. It allows him to keep a solid base, but leaves him open for low kicks. Eddie Alvarez ripped up his front leg and Barboza will probably do the same, if not worse. Barboza’s biggest enemy is pacing. Pettis allowed him to work at his own rate and didn’t force the action. Tony Ferguson forced Barboza to increase his output, and he was visibly tired by the second round. Barboza has a ton of power, but he doesn’t deal with pressure well. Melendez may be limping come Sunday, but he’ll still pick up the decision on the judges’ scorecards.

Time for the main event! Holly Holm fights for the first time since losing the belt to Miesha Tate. Given the state of the women’s bantamweight division right now, anyone could be a fight or two away from a title shot. Valentina “Bullet” Shevchenko is counting on that. She lost to Amanda Nunes in her last trip to the Octagon, but a win against Holm could set her up for a rematch.

Why did Holm look so great against Ronda Rousey, but struggle against Tate? The answer is pressure. Holm doesn’t initiate exchanges well. She counters with straight shots and sidekicks. She lets the fight come to her and responds accordingly. Shevchenko is similar, but different. She has a traditional Muay Thai style and throws for power. She’ll work takedowns from the clinch and use trips, but she doesn’t chain her wrestling together like Tate. Shevchenko likes to strike from inside. She throws tight, power punches and tries to lock up the clinch. She rarely throws combinations to enter close range, though. If she doesn’t change that, Holm’s footwork and command of distance won’t let her get anywhere near the former champ. Holm frustrates Shevchenko, peppers her with punches and takes the decision win.

That wraps up another blustery edition of the Downes Side. Follow me on Twitter @dannyboydownes. Also, don’t forget to leave your own predictions, thoughts, anecdotes and hatred for other regional foods on the page here. We may not agree on my picks, but can we all at least agree that Skyline Chili sucks?