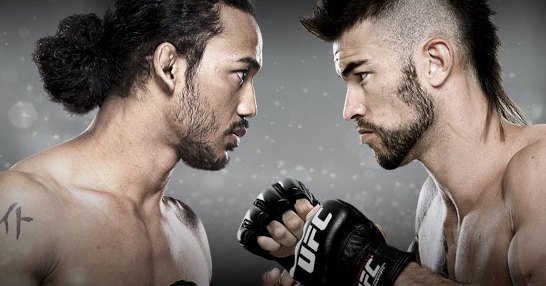 That’s right boys and girls, it’s time for another Valentine’s Day edition of the Downes Side! I’ve been called a lot of things over the years (most of them I can’t reprint), but “romantic” has to be at least in the top 200.

That’s why you should do what I do and treat that special man/lady in your life to UFC Fight Night live from the 1stBank Center in Broomfield, Colorado. It’ll be an enchanting evening as welterweights Benson Henderson (yes, you read that right) and Brandon Thatch compete in the main event. In the co-main event of the night, featherweights Max Holloway and Cole Miller will put on a performance that will ensure fireworks. So take that White Castle to go and settle down for an enchanting evening because it’s fight time!

We begin in the flyweight division with Ray Borg and Chris Kelades. After losing a split decision to Dustin Ortiz in his UFC debut, the “Tazmexican Devil” Borg returned to action with a first-round submission win over Shane Howell in June. Chris Kelades had better luck in his Octagon debut last October when he pulled the upset win over Patrick Holohan. His “Greek Assassin” nickname may be less creative than Ray Borg’s, but at least he didn’t make a 300 reference.

Kelades is well-versed, but lacks one go-to skill. Being a “jack of all trades” may be helpful for your OK Cupid profile, but it’s a detriment in the UFC. The 21-year-old Borg may still be unproven in many respects, but he’s shown greater flashes of brilliance in his time inside the Octagon. Borg scores the early takedown, advances position and locks up the first round submission.

We climb to lightweight for Michael “Tractor” Prazeres and Kevin Lee. A submission specialist, Prazeres shares a lot with his nickname. He’s not the fastest/most explosive, but you certainly wouldn’t want to be stuck under one. Another young prospect, Kevin Lee has won two straight over Jesse Ronson and Jon Tuck.

Lee’s recipe for success is fairly simple. He needs to use his reach and superior striking to nickel and dime his way to a win. The question is, though, “Can he utilize this game plan?” I’m skeptical. Lee stands too heavy on his feet and doesn’t have the best foot movement. He may be able to use his athleticism to avoid Tractor’s grip, but that will only work for so long. Prazeres clinches and wears Lee out to take the upset decision. Detroit just can’t catch a break...

We move to middleweight for Dan Kelly and Patrick Walsh. A member of the last season of TUF Nations, Kelly’s Olympic-level judo provides a strong base for his brawling style. A veteran of TUF 19, Walsh also has a strong grappling base. Primarily a wrestler, he used those skills to take a decision win over Daniel Spohn in his official UFC debut.

Whenever you have two grapple-heavy fighters competing, there’s the strong chance it will become an ugly kickboxing fight. And I don’t necessarily mean that in a negative way. It’s like when you talk about shih tzu’s. By objective standards of beauty, they’re hideous, but there’s something strangely appealing. It’s what the French would call je ne sais quoi. Walsh is younger and more powerful, but he doesn’t show the same dirty boxing proficiencies as Kelly. The Australian runs his undefeated streak to nine as he takes the unanimous decision.

We drop to welterweight for Neil Magny and Kiichi Kunimoto. Coming off a wildly impressive 2014 where he went 5-0, Magny tries to make a jump to the next 170-pound level in 2015. Kunimoto had a strong 2014 as well. He added three more victories to record and ran his current win streak to seven.

Much like the Lee vs. Prazeres fight, this match is about one fighter maintaining distance. Magny has a huge reach advantage, and doesn’t want this fight to go to the ground. He may have capable submission defense, but Kunimoto has tapped Jiu-Jitsu black belts, so it’s best not to push his chances. Unlike Lee/Prazeres, however, Magny has the tools to accomplish the task. He has a strong command of distance and knows how to work his straight punches. Magny may not be a top 10 welterweight, but he’ll earn a chance to prove himself. Magny by decision.

That brings us to the co-main event of the evening. Following two straight losses to Dennis Bermudez and Conor McGregor, Max Holloway has rattled off four straight wins. His last time out he only needed three minutes to finish Akira Corassani. An alum of season five of The Ultimate Fighter, Cole Miller has been a UFC fixture since his 2007 debut against Andy Wang (remember that guy?).

Miller has solid striking credentials, but tends to struggle against strikers with a high output. If you give Miller time, he’ll be able to pick you apart, take you down and submit you. Unfortunately for “Magrinho,” Holloway won’t give him the time. His high volume will overwhelm Miller and never let him get comfortable. Given his much improved power punching over the last year, Holloway controls this fight from the start and finishes it in the third via TKO.

Time for the main event! After finding himself on the wrong end of a close decision to Donald Cerrone, former lightweight champion Benson Henderson moves up to welterweight for the first time in the UFC. Not only that, he’s less than a month removed from his aforementioned fight against Cowboy. One of the most exciting up and coming fighters in the UFC, Brandon Thatch steps inside the Octagon for the first time since November 2013.

Benson Henderson and Brandon Thatch employ two totally different styles. Think of them like cooking food. Henderson prefers the “low and slow” method. He slowly tenderizes his opponents by attacking at different levels and mixing in takedowns and fence work. Thatch, on the other hand, probably just torches things with a flamethrower. He has no time to wait and all 11 of his victories have come in the first round. Henderson’s relative tentativeness will be his undoing. Thatch will come out like he always does and steamroll his way to a first-round TKO.

That wraps up another chimerical edition of the Downes Side. Follow me on Twitter @dannyboydownes. Also, don’t forget to leave your own predictions, thoughts, intercessions and tales of romantic whimsy on the page here. I remember when I fell in love with my best friend’s girl. Eventually I broke things off to become a stockbroker in Boston. That life wasn’t for me... Actually, now that I think about it, I’m pretty sure that was Dawson’s Creek.