I hope you brushed up on your Technoself studies, boys and girls, because it’s time for another robotic edition of The Downes Side! This week, everyone’s favorite self-proclaimed cybernetic organism returns to the Octagon, live from Brasilia, Brazil, as Cristiane “Cyborg” Justino places her 11-year win streak on the line against Swedish striker Lina Lansberg. We’ll analyze that fight and others. 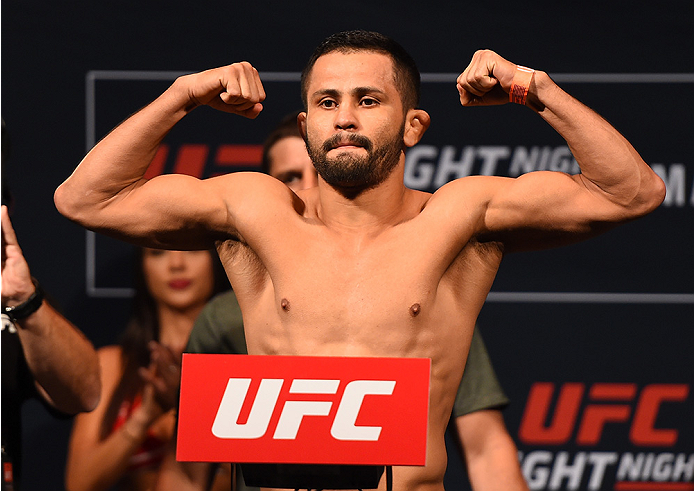 We start in the flyweight division with Jussier Formiga and Dustin Ortiz. Formiga had a rough start to his UFC stint, but he’s won three of his last four fights. Dustin Ortiz, on the other hand, has dropped two of his last three fights. He’s coming off a decision loss to Wilson Reis in January.

This fight goes to whoever takes the initiative. Both fighters are well rounded with diverse skillsets, but they tend to let their opponents dictate the fight. In the striking department, Formiga is technically sound, but unremarkable. He throws the basic combinations well, but relies too much on counter punching. Ortiz has a bit more power, but can get reckless when charging to attack. This is where Formiga makes his move. He may not have the pure power of Wilson Reis (who successfully grounded Ortiz), but he hits trip takedowns and duck-unders with enough accuracy to be a bother. He won’t be able to hold Ortiz down, but he’ll place him on his back enough to take the unanimous decision.

Next, we move to lightweight for Francisco Trinaldo and Paul Felder. The 38-year-old Trinaldo has won six fights in a row and could break into the 155-pound rankings with a win here. One of the more physically powerful fighters in the division, he’s only finished one fight during his current win streak. After two straight losses to Ross Pearson and Edson Barboza, the “Irish Dragon” Felder has won two straight.

A Paul Felder fight is like a Whitesnake song. There’s a slow build that eventually erupts into an entertaining crescendo. A Francisco Trinaldo fight is like a Quiet Riot song – it comes at you right away. Trinaldo may lack the finishes, but can be effective at holding opponents against the fence and wearing them out. Felder can fall into periods of inactivity, and that would make him ripe for Trinaldo’s preferred method of attack. As previously mentioned, though, Felder tends to get stronger as a fight progresses while Trinaldo fades. As he moves into the later rounds, his punches become wider and he loses his physical edge. Felder may not know where the fight’s going, but he knows where he’s been. As the second and third round begin, he’ll make up his mind, he won’t waste any more time and go get the decision victory.
MORE FROM FIGHT NIGHT BRASILIA: Lansberg not intimidated | Cyborg on the brink | Strikers invading Brazil | Under-the-Radar fights | Free Fight - Watch Cyborg's UFC debut | Brasilia Fantasy Preview | The Gracie Breakdown - Renan Barao

We move to the featherweight division for Renan Barao and Phillipe Nover. It’s been a rough couple years for Renan Barao. Not only did he lose his bantamweight title (and the rematch) to TJ Dillashaw, Jeremy Stephens ruined his 145-pound debut. Phillipe Nover will attempt to continue that skid. A TUF alumnus, seven of his career victories have come via knockout or submission.

Jeremy Stephens and TJ Dillashaw have very different fighting styles. What they have in common, however, is the way Barao lost to them. In both cases, he stopped using his footwork. Much like a shark, if Barao doesn’t move, he dies. Even if Nover may not have the name recognition of his other opponents, his power strikes can still bring Barao down. Nover’s biggest vulnerability in this fight is his stance. He usually maintains a traditional martial arts stance and rotates his front leg slightly inward. This makes him a perfect target for low kicks. There are ways to effectively fight from this stance, but Nover hasn’t shown it. Barao beats him up with low kicks, drops him in the second and finishes him with a rear naked choke.

Time for the main event! Regardless of what weight class she competes in, Cris “Cyborg” is one of the most dangerous fighters in all of MMA. She made her UFC debut back in May and only needed 81 seconds to finish Leslie Smith. An accomplished Muay That striker, Lansberg has made a successful transition to MMA. Four of her career wins have come by knockout, including two in the first round.

There have been many dominant fighters throughout MMA. Ronda Rousey, Anderson Silva, Georges St-Pierre, Fedor Emelianenko – all of them are / were dominant, but not invincible. Cyborg is no exception to that rule. She’s powerful, and that power and aggression are some of her greatest attributes, but they also present weaknesses. She has become so used to pushing opponents around that she forgets that she’s not invincible. It’s a flaw that will cost her one day, just not this day. Lansberg’s striking style works better in a kickboxing fight than MMA. She can’t stall in the clinch, and small gloves are much less forgiving than boxing gloves. This Saturday she’ll realize how unforgiving they can be. Cyborg’s notches her 15th career KO in the first round.

That wraps up another Manfred Clynes approved edition of the Downes Side. Follow me on Twitter @dannyboydownes. Also, don’t forget to leave your own thoughts, predictions and other favorite cyborgs, androids or automatons on the page here. I was always a fan of Vicki from Small Wonder.