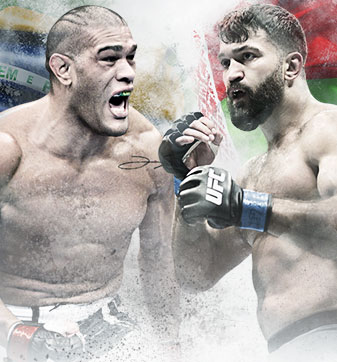 That’s right boys and girls, it’s time for another Brazilian edition of the Downes Side! As I sit in the San Diego airport waiting for my expense account to clear, some of the world’s best fighters are getting ready to compete in Brasilia, Brazil for UFC Fight Night: Bigfoot vs. Arlovski.

The main event of the evening features a clash of ranked heavyweights as Antonio “Bigfoot” Silva takes on Andrei “The Pit Bull” Arlovski. Silva tries to get back into the title picture while Arlovski can continue to prove his doubters wrong. In the co-main event of the night, lightweights Gleison Tibau and Piotr Hallmann will look to set themselves apart in the crowded 155-pound division.

We open the main card in the women’s bantamweight division with Jessica Andrade and Larissa Pacheco. Andrade is an aggressive fighter who lands a staggering 7.24 strikes per minute. That’s only slightly less than the number of different pronunciations of her last name you’ll hear. An up and comer taking the fight on short notice, Larissa Pacheco is a rangy fighter who has finished every single one of her opponents (six of them in the first round).

Pacheco is only 20 years old and has a ton of upside. She could make waves in the division in the future, but this time out, expect only bubbles. Pacheco has questionable striking defense and leaves her guard fairly open. She’s been able to get away with it on the regional scene, but when you face someone with the output of Andrade, you’re just asking for trouble. The assault will be too much for the young fighter to handle and Andrade takes this by first round TKO.

We switch to the men’s bantamweight division for Iuri Alcantara and Russell Doane. After losing a decision to Urijah Faber, Alcantara has won two in a row over Wilson Reis and Vaughan Lee, the latter by a blistering 25 second knockout back in May. That combination of KO power and jiu-jitsu skills (12 of his victories have come via submission) is why Alcantara is one of the top 10 fighters in the division. Holding an undefeated record of 2-0 in his young UFC career, Hawaii’s Doane has made quite a name for himself already. Athletically gifted with a solid wrestling base, Doane will look to bring this fight to the mat.

At first glance, many people may think that Alcantara runs away with this one. I’m not so sure. Doane may not have the same level of power in his hands, but he does use them to transition to his wrestling. He could keep Alcantara busy enough to get on the inside and control him from the clinch. There’s always a possibility that the Brazilian will start to time the takedowns and drop him with a counter, but I trust Doane’s decision making. As long as he avoids standing still and letting Alcantara get into a groove, the Hawaiian pulls the upset and wins by unanimous decision.

We move to welterweight for Santiago Ponzinibbio and Wendell Oliveira. After having to pull out of the TUF Brazil 2 Finale, Ponzinibbio’s bad luck continued with a decision loss in his UFC debut. A Team Nogueira product, the Argentinean is a well-rounded fighter, but he lacks accuracy in his strikes. Oliveira is a longtime veteran of the Brazilian regional circuit. Incredibly strong and brutal, he’s finished 11 opponents by either knockout or TKO.

If I were creating Ponzi’s scheme, I would tell him to be patient. Oliveira can do a lot of damage when he gets his hands on you, but the majority of his attacks are wild and inconsistent. Not forcing the action is the best way to beat a fighter like this. Eventually their technical flaws show, and you exploit them. Ponzi will be cool like Fonzie. He’ll take his time, avoid the haymakers and pick Oliveira apart for the unanimous decision.

We drop to lightweight for Leonardo Santos and Efrain Escudero. After winning the second season of TUF Brazil, Santos suffered a bit of a sophomore slump in his next fight against Norman Parke. The judges scored it a draw, but it wasn’t a great performance. He’ll look to get back on the right track against Efrain Escudero. The winner of TUF 8, Escudero begins his third stint in the Ultimate Fighting Championship. A jack of all trades but master of none, eight of his last ten fights have gone the distance.

Santos has world class jiu-jitsu, but only average wrestling. He’ll look for the takedown early, but he’ll struggle against Escudero’s solid defense. Over time though, Santos will find a way to wear him down. Escudero doesn’t set a particularly fast pace and often seems content to wait rounds away. Santos’ relentless attack will be his key to victory. He’ll find a way to force the fight to the mat and work from there. He won’t get the finish, but he’ll take home the decision victory.

We stay at lightweight for Gleison Tibau and Piotr Hallmann. Ever since making his debut against Nick Diaz at UFC 65 in 2006 against Nick Diaz, Tibau has been a mainstay. Hallmann, on the other hand, has only three fights inside the Octagon. A balanced fighter who’s finished opponents on the feet and on the ground, he’s coming off a third-round submission win over another UFC veteran in Yves Edwards.

Coming off one of his best performances in recent memory, there’s one question on everyone’s mind -- Why did the UFC stop naming pay per views? I mean, look at some of the event names Tibau has fought on: Bad Intentions, Uprising and Breaking Point. Those all sound like cool direct to DVD action movie releases. Huh...I suppose that’s why they stopped naming them. The second question that comes to mind is, “Can Gleison Tibau make a run into the top ten?” I’m not so sure about that, but he’ll get one step closer. Hallmann is technically superior, but he’ll struggle with Tibau’s power differential. As long as he doesn’t gas out, Tibau takes the decision.

Time for the main event! The #4 ranked heavyweight and #1 ranked fighter with a nickname referring to Sasquatch, Antonio “Bigfoot” Silva wants to stay relevant in the division. The #14 ranked heavyweight and the #1,443,728 fighter in the world to use the nickname “Pitbull,” Andrei Arlovski can capitalize on his successful UFC return against Brendan Schaub in June with a win here. A former champion, Arlovski relies on his speed and crisp boxing combinations to win.

Much like Betty White, the reports of Andrei Arlovski’s demise have been greatly exaggerated. He hasn’t been finished in over three years and recently fought Anthony Johnson to a unanimous decision, so the 35-year-old still has some gas in the tank. Unfortunately, Bigfoot is going to siphon out some of that. No one will confuse Silva for being the most fluid striker, but he has improved his hands and mixes his boxing and clinch attacks well. Arlovski will try to stick and move, but eventually Bigfoot will get his hands on him and make him pay. Silva by TKO in the second.