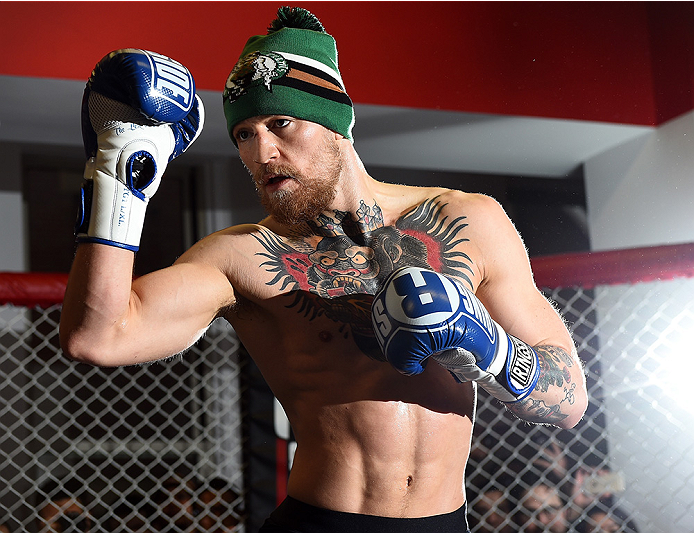 That’s right boys and girls, it’s time for another Boston baked edition of the Downes Side! Even though I’ll continue to pronounce the letter “r,” it will still be a predictions piece that would make Mark Wahlberg and all 13 members of the Mighty Mighty Bosstones proud.

The impression that I get from this week’s Fight Night card is a strong one. Live from the TD Garden, “The Notorious” Conor McGregor has an opportunity to earn a featherweight title shot. Not Conor McGregor (called Dennis Siver by some) can make a lot of people happy and break the hearts of the entire nation of Ireland with an upset. In the co-main event of the night, Donald Cerrone steps back into the Octagon only 15 days removed from his last fight. He’ll take on his old nemesis from the WEC, “Smooth” Benson Henderson. Grab a nice, warm bowl of chowdah, it’s fight time!

We open the main card in the lightweight division with Norman Parke and Gleison Tibau. A judo black belt and winner of “TUF: The Smashes,” Parke holds a 4-0-1 record inside the Octagon. A veteran of 23 UFC fights, American Top Team’s Gleison Tibau overwhelms opponents with physicality. While he does have some power in his hands, his wrestling is his primary weapon.

Both fighters have excellent grappling games. They each defend takedowns at over 90%, though, so I don’t see this fight ending up on the ground. Parke has the speed advantage, and could employ a hit and run style of attack, but he lacks the footwork to pull it off. This fight will primarily be fought in the clinch, and that favors Tibau. Parke will make it competitive, but he’ll end up getting smothered like Waffle House hash browns. Tibau by decision.

We move up to middleweight for Uriah Hall and Ron Stallings. The expectations were high for Hall coming out of TUF 17. After losing his first two UFC fights, not only did those expectations diminish, some even questioned if he should continue to fight at all. After wins over Chris Leben and Thiago Santos, Hall tries to keep the momentum going. Stepping in on short notice, Ron Stallings has gone a long way to make it to the UFC. Fighting professionally since 2003, the “ChoirBoy” can make a big impact in his debut.

Hall has been his own worst enemy. He has all the tools to win, he’s just lacked the aggression or confidence to implement them. Stallings is capable everywhere, but not especially proficient at any one thing. Hall has shown weaknesses in the clinch department, but Stallings won’t be able to get on the inside. Hall controls the distance with his diverse kicking arsenal and takes the second round TKO.

We return to lightweight for Donald Cerrone and Benson Henderson. After stifling Myles Jury and teaching us what “f**k you” kicks look like a mere two weeks ago, “Cowboy” Cerrone wastes little time climbing back into the Octagon. He’ll have his hands full as he takes on former lightweight champion Benson Henderson. After losing the belt, Henderson responded with wins over Josh Thomson and Rustam Khabilov. The first TKO loss of his career to Rafael dos Anjos in August, however, put the brakes on another title shot.

These two last fought each other at WEC 48 in April 2010. A lot has changed since then. For instance, nobody still cares about “Glee” or “The Jersey Shore.” Despite all these changes, the differences between the two remain. Cerrone is an aggressive striker who will charge forward. Henderson may not have the same aggressiveness, but he avoids taking damage and counters well. As long as Henderson shows a greater sense of urgency and doesn’t stall rounds away, his power and grappling advantage should serve him well. Henderson by decision.

Time for the main event! Love him or hate him, Conor McGregor has made quite the impact in his short time in the UFC. His flash on the mic is almost matched by his flash in the Octagon. “Fluke punch” or not, he still knocked out Dustin Poirier in the first round at UFC 178. Not Conor McGregor may not be Conor McGregor, but Dennis Siver has a strong kickboxing base and underrated wrestling.

If you look at the odds, Siver has a better chance of finding a McNugget that looks like Abraham Lincoln than beating McGregor. That’s simply not true. For all his bravado and impressive striking, the Irishman does leave a lot of counter opportunities when he attacks. Siver has the ability to connect on one of those opportunities. While he may be able to connect on counter strikes, Siver lacks the power to put opponents away with one punch. Even if it’s a well-timed one. McGregor won’t run through Siver as easily as he claims, but he’ll put the German away by knockout in the third.

That wraps up another wicked pissah Downes Side. Follow me on Twitter @dannyboydownes. Also, don’t you Chuckleheads forget to leave your thoughts, opinions, ruminations and favorite Boston slang on the page here. And don’t anyone say anything bad about Ben Affleck!