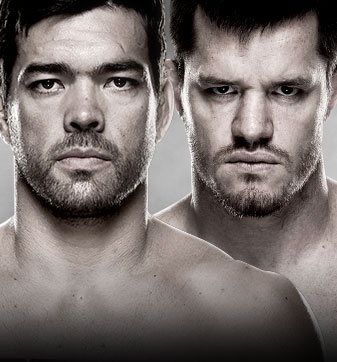 That’s right boys and girls, it’s time for another Festivus edition of the Downes Side!

The best mixed martial artists in the world are certainly in the Festivus spirit this week. This Saturday they plan on even showcasing some feats of strength live at Fight Night Barueri. In the main event of the night, Lyoto “The Dragon” Machida tries to work his way back to a middleweight title shot as he takes on the fast rising CB Dollaway. In the co-main event of the night, Renan Barao looks for redemption against Canadian submission specialist Mitch Gagnon.

We open the main card in the middleweight division with Daniel Sarafian and Antonio dos Santos. After a strong showing on the inaugural season of TUF Brazil, Sarafian has lost three of his four fights in the UFC. Two of them have been by split decision, but almost only counts in horseshoes and when your wife asks you, “Are you done cleaning?” Dos Santos makes his UFC debut on short notice, stepping in for an injured Dan Miller.

Both these fighters are hard to analyze. Sarafian showed some early promise, but he’s disappointed in his appearances so far. Dos Santos has plowed through his competition, but his opponents have a win/loss record on par with the Washington Generals. Sarafian may be inconsistent, but he’ll take the fight to the ground and lock up the second round submission win.

We move to welterweight for Erick Silva and Mike Rhodes. Another inconsistent fighter, Silva has traded off wins and losses his entire UFC career. Most recently, he was knocked out by Matt Brown in a Fight of the Year candidate in May. A Roufusport fighter who’s winless in his first two UFC fights, Rhodes has the odds stacked against him.

Silva is a fast starter. He comes out strong and pushes the pace. Rhodes, on the other hand, takes a more measured approach. He’s technically proficient, but being tentative can be a recipe for disaster in this fight. Silva will come out aggressively, searching for the fast knockout. Rhodes takes some damage, but he’ll ultimately weather the storm. Once he gets out of the first round, “Biggie” will slowly gain some steam and outpoint Silva on his way to a decision win.

We drop to lightweight for Elias Silverio and Rashid Magomedov. A talented striker who’s rounded out his game with serviceable wrestling, “Xuxu” Silverio holds a perfect 3-0 record in the UFC. He also makes me wish a fighter had the nickname “xoxo.” A skilled sambo artist with seven career knockouts, Magomedov defends 91.67% of takedown attempts.

Magomedov has the grappling advantage, but he still seems uncertain on his feet. He counters effectively, but struggles to close distance and create a sustained offensive output. Silverio doesn’t have that problem. His accuracy may not be the best, but he does keep a consistent pace. As long as he avoids playing the clinch game, Silverio strikes his way to a unanimous decision win.

That brings us to the light heavyweight division for Antonio Carlos Junior and Patrick Cummins. Winner of the third season of TUF Brazil, Junior aka “Shoe Face” has a distinguished jawline that gives Urijah Faber a run for his money. When he first signed with the UFC, the most distinguishable trait of Cummins was his latte art. Since then, he’s used his wrestling base to earn back to back wins over Roger Narvaez and Kyle Kingsbury.

This fight comes down to Junior’s world-class Brazilian Jiu-Jitsu and Cummins’ wrestling. The Brazilian has a lot of physical power, but he also has a poor stand-up base. This leaves him susceptible to takedowns and Cummins will exploit it. Junior has a dangerous guard, but Cummins will use ground and pound to neutralize the submission attempts. Cummins by third round TKO.

Next we shift to the bantamweight division. After losing his title to T.J. Dillashaw and failing to make weight in the rematch, Renan Barao had quite the fall from grace. A heavy underdog, Mitch Gagnon would like nothing better than to contribute to that downfall. Winner of four straight, 10 of his career wins have come via submission.

Barao may be going through a rough patch, but I’m surprised at how fast people have written him off. I haven’t seen this lack of support since the Tappan Zee bridge. Barao is still one of the best fighters in the world and he’ll prove that here. He’ll be too fast for Gagnon and will consistently beat him to the punch. Gagnon will try to close the distance and get the takedown, but all he’ll find is a well-placed knee. Barao puts the bantamweights back on notice with a second round TKO.

Time for the main event! A former light heavyweight champion, Lyoto Machida wants to return to the win column after an unsuccessful middleweight title attempt against Chris Weidman. An incredible counter striker, “The Dragon” defends takedowns at a 77.38% rate. Once in danger of earning the dreaded “gatekeeper” tag, Clarence Byron Dollaway is now one of the top 10 fighters in the division. Winner of four of his last five, he’s added striking and a diverse set of chokes to his already impressive wrestling base.

Some have said that Machida struggles against wrestlers, but the record doesn’t show that. Yes, he’s lost to Weidman, Phil Davis and Jon Jones, but he’s also beaten Mark Munoz, Ryan Bader, Dan Henderson and Randy Couture. Last time I checked, those guys were pretty good at wrestling. Dollaway has made some big strides in the last year, but not enough to beat someone like Machida. The Dragon avoids the takedown, times his opponent and delivers a knockout with a left cross in the third round.

That wraps up another Downes Side for the rest of us! Follow me on Twitter @dannyboydownes. Also, don’t forget to air your grievances on the page here. I know the internet is usually a place for positivity and encouragement, but I’m sure we can change that just this once.